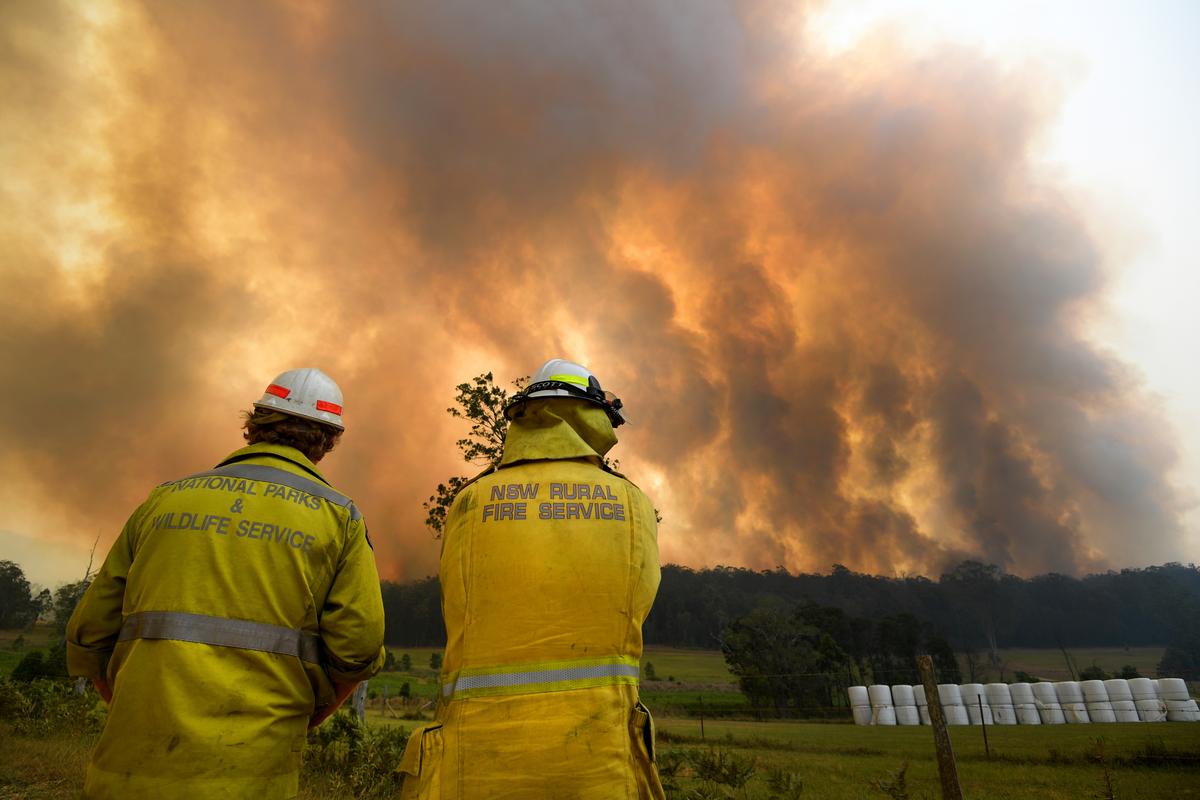 SYDNEY (Reuters) – Tens of thousands of Australians took shelter on Tuesday after authorities warned it was too late for them to leave their homes as bushfires raged across a vast area of the country’s east coast.

Officials issued 11 emergency warnings in New South Wales (NSW), each covering several communities, as more than half the 71 fires across the state burned uncontrolled amid “catastrophic” conditions.

“Complacency kills – we cannot afford for people to be complacent,” New South Wales Rural Fire Service Commissioner Shane Fitzsimmons, who is providing two-hourly updates on conditions throughout the day, told reporters in Sydney.

“This will only worsen throughout the afternoon as the weather conditions continue to deteriorate, and particularly those strong winds strengthen.”

Bushfires are a common and deadly threat in Australia’s hot, dry summers, but the ferocity and early arrival of this year’s outbreak in the southern hemisphere spring has caught many by surprise.

Blazes have been spurred by extremely dry conditions after three years of drought in parts of NSW and Queensland, which experts say has been exacerbated by climate change.

The current outbreak, which killed three people and destroyed more than 150 homes over the weekend, has been fanned by an unprecedented combination of high temperatures and strong winds.

In the small town of Wauchope, 400 kilometres (249 miles) north of Sydney, residents moved hundreds of livestock to the showground, located near the centre of town, as fires approached.

“We have at least 350 horses, maybe more. They are still coming, we have cattle and sheep and chooks and dogs and pigs, you name it,” said Neil Coombes, who is president of the Wauchope Show Society.

Coombes, who lives about 10 kilometres (6.2 miles) outside of town, said he would likely lose his home as it was in the anticipated path of the fire.

“My wife went home earlier and said, ‘is there anything you want me to get?’”

“I said, ‘yes, I want you back here with me. If the house burns it burns but I can’t replace her.”

The worst of the weather is not expected until later in the afternoon and through the evening, with temperatures forecast to reach 37 degrees Celsius (98.6 degrees Fahrenheit), along with strong winds.

Seeking to avoid further deaths, firefighters in both NSW and Queensland state have been given broad powers under a seven-day state of emergency to control government resources, force evacuations, close roads and shut down utilities.

In Sydney, home to five million people, health authorities urged people with respiratory issues to stay indoors as the city was covered by a “hazardous” smoky haze. Around 600 schools and colleges were closed across the state.

The fires also forced organizers of the Rally of Australia, which is set to decide the manufacturers’ title between Hyundai and Toyota, to reduce the route to less than a third of the original distance.

In Queensland, the danger was not quite as great, with the threat level pegged at “severe”, two levels below the “catastrophic” conditions in NSW. Still, some 22 fires were burning across the northern state.

The current threat has sharpened attention on the policies of Australia’s conservative government to address climate change, which the country’s weather bureau has said is extending the length of the fire weather season.

Prime Minister Scott Morrison, a vocal supporter of Australia’s coal industry, has declined to answer questions about whether the current fires were a result of climate change.

“The government says this isn’t the time to talk about climate change – I completely disagree, we should have been talking about this years ago,” said Carol Sparks, the mayor of Glen Innes, north of Sydney, where two people died at the weekend.

“We are overwhelmed with the intensity of this fire and climate change is responsible.”

For a graphic on the State of emergency: Australia’s bushfires: