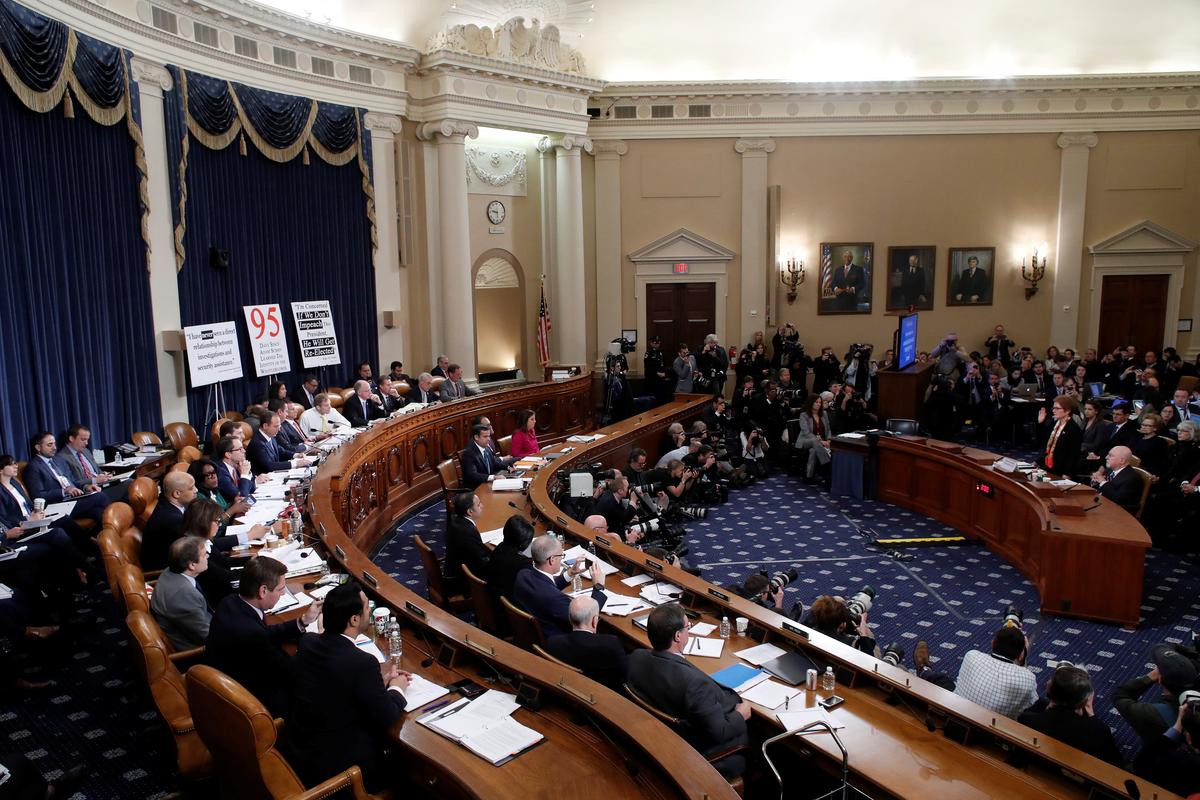 WASHINGTON (Reuters) – President Donald Trump launched a Twitter attack on a former U.S. ambassador to Ukraine on Friday while she was testifying to an impeachment hearing in Congress, an extraordinary moment that Democrats said amounted to witness intimidation.

Former Ambassador to Ukraine Marie Yovanovitch is sworn in to testify before the House Intelligence Committee hearing as part of the impeachment inquiry into U.S. President Donald Trump on Capitol Hill in Washington, U.S., November 15, 2019. Alex Wong/Pool via REUTERS

That was the first of three takeaways from Friday’s hearing that are likely to continue to feature in future proceedings.

Trump’s tweet about former U.S. Ambassador Marie Yovanovitch during her testimony on Friday drew a furious response from Democrats who accused him of witness intimidation.

Trump tweeted “everywhere Marie Yovanovitch went turned bad,” tracing her career from Somalia to Ukraine. He told reporters later he did not think his tweets were intimidating.

“I have the right to speak. I have freedom of speech just as other people do,” he said.

Nick Allard, who worked for Senator Ted Kennedy on the Judiciary Committee, told Reuters witness tampering could be added to the articles of impeachment.

He said Trump’s tweets were part of a “pattern of efforts to criticize and frighten witnesses including possible future witnesses who have yet to testify. It sends a signal that there is a heavy risk attached to giving evidence in the impeachment inquiry of being publicly derided and pressured by the most powerful person on the planet.”

“Any first-year law student will tell Trump that the right to free speech is not a defense to witness tampering,” he added.

Representative Elise Stefanik, known for being the youngest woman elected to Congress at the time she was elected in 2014 at the age of 30, took center stage as a vocal defender of Trump during the televised hearings.

The congresswoman was one of the sharpest questioners of the three American diplomats who testified on Wednesday and Friday, overshadowing some colleagues whose vociferous defense of the president is better known.

The conservative-leaning National Review praised Stefanik’s performance as “a concise, coherent, ‘no harm, no foul’ defense stronger than other arguments Trump’s allies have made.”

“A PATTERN TO OBSTRUCT”

In a preview of how Democrats may be building a broad case against Trump, Representative Adam Schiff, who is chairing the hearings, talked on Friday about “a pattern to obstruct.”

Another element was Trump’s suggestion that the whistleblower whose concerns led to the impeachment inquiry should be treated “as we treat traitors and spies,” Schiff said.