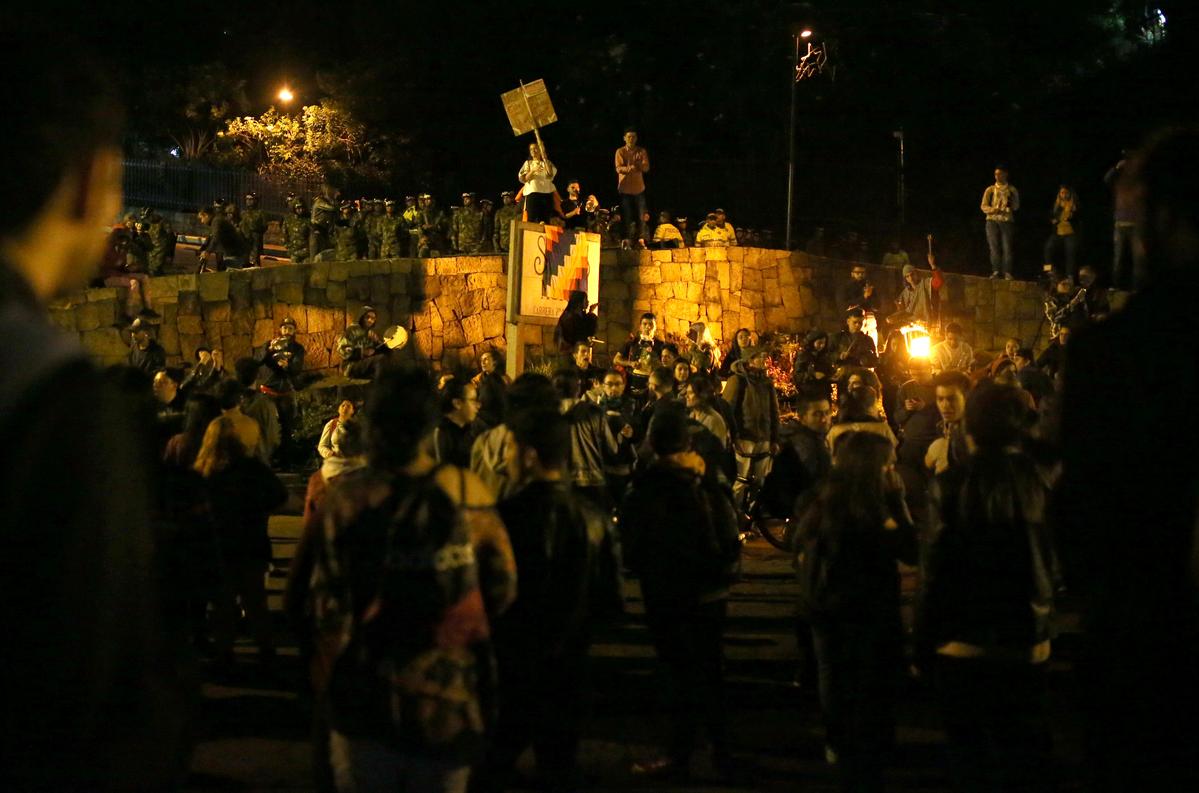 BOGOTA (Reuters) – Three police were killed in a bomb blast late on Friday at a police station in Colombia, after thousands gathered for renewed protests and sporadic looting erupted in the capital Bogota.

Demonstrators gather during a protest on the second day of a national strike in Bogota, Colombia, November 22, 2019. REUTERS/Luisa Gonzalez

A police source told Reuters 10 officers were also injured in the explosion, in the town of Santander de Quilichao in the southwestern province of Cauca, known as a hot spot for drug trafficking and violence.

The source did not attribute the bombing to a particular armed group. Police are expected to hold a news conference on Saturday morning.

Three people were killed on Thursday as more than 250,000 people marched in a national strike to express growing discontent with President Ivan Duque’s government.

Their grievances included rumored economic reforms that the president has denied and anger at what protesters call a lack of government action to stop corruption and the murder of human rights activists.

Thousands gathered on Friday afternoon in Bogota’s Bolivar Plaza for a “cacerolazo” – a traditional Latin American expression of protest in which people bang pots and pans.

“We are here to keep protesting against the Duque government,” said 25-year-old art student Katheryn Martinez, as she clanged a pot with a fork accompanied by her father Arturo, 55.

“It’s an inefficient government that kills children and doesn’t acknowledge it,” she said, referring to a recent bombing targeted at rebels that killed eight teenagers and prompted the former defense minister to resign.

The crowd, which included families and elderly people, was abruptly dispersed by tear gas, sending protesters running up the steep narrow streets of the historic district.

Some protesters regrouped at nearby intersections and continued chanting, while people in other neighborhoods gathered in celebratory cacerolazos, temporarily blocking some roads.

A 9 p.m. curfew is in force across Bogota, except for the neighborhoods of Bosa, Kennedy and Ciudad Bolivar, where it began at 8 p.m.

Posts on social media and callers into radio stations said neighbors were organizing to protect homes from looters, while officials urged calm.

Several supermarkets in the city’s south were looted on Friday as protesters, many masked, burned items in the street and blocked roads. Other protesters stole a public bus.

Some people were taking advantage of the protests to “sow chaos”, Duque said in a televised address on Friday evening.

“From next week I will start a national conversation that will strengthen the current agenda of social policies,” Duque said.

He added that dialogue would “permit us to close social gaps, fight corruption more effectively and build, between all of us, peace with legality.”

He said authorities had confirmed two deaths in Buenaventura and one in Candelaria, adding that a group of people had tried to loot the Viva Buenaventura mall.

“As a result of the confrontation between vandals and security forces and in events that are the subject of investigation by the attorney general’s office, two people were killed,” he said.

Though the vast majority of Thursday’s marchers participated peacefully, 98 people were arrested, while 122 civilians and 151 members of the security forces were injured, he said.

Authorities launched 11 preliminary investigations into security forces’ misconduct, Trujillo added, after social media images of protesters’ rough treatment by police, including one kicked in the face.

The protests have coincided with demonstrations elsewhere in Latin America, from anti-austerity marches in Chile, to protests over vote-tampering allegations in Bolivia that led President Evo Morales to resign, and inflamed tensions in Ecuador and crisis-hit Nicaragua.