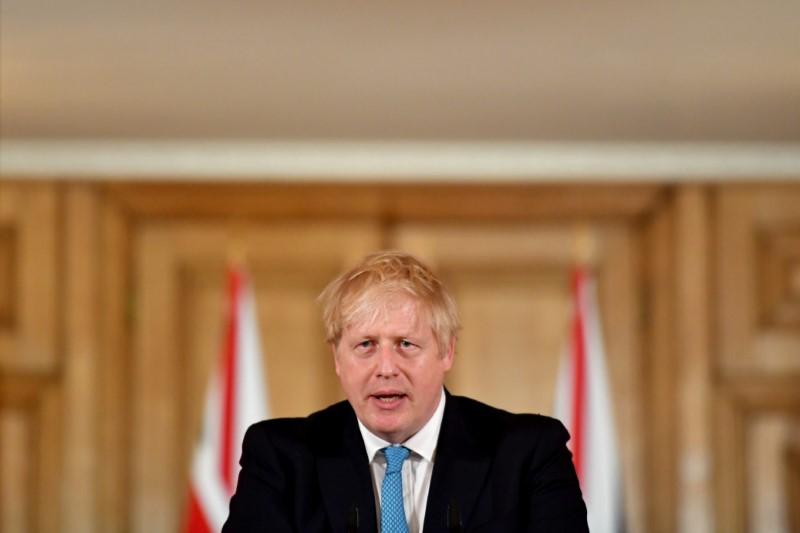 LONDON (Reuters) – Prime Minister Boris Johnson effectively closed down the United Kingdom on Friday, ordering pubs, restaurants, theatres, cinemas and gyms to shut their doors in a bid to slow down the accelerating spread of the coronavirus.

As the coronavirus outbreak sweeps across the world, governments, companies and investors are grappling with the biggest public health crisis since the 1918 influenza pandemic, panicked populations and imploding financial markets.

Johnson said he understood just how wrenching it was to take away the ancient rights of the British people to go to the pub but that it was absolutely essential to slow the spread of the coronavirus.

“I do accept that what we’re doing is extraordinary: we’re taking away the ancient, inalienable right of free-born people of the United Kingdom to go to the pub, and I can understand how people feel about that,” Johnson said. “It’s a huge wrench.”

“It’s a huge wrench to do that, everybody understands that,” he said. “It’s heartbreaking to think of the businesses that will face difficulties as a result of the measures this country has had to take.”

The United Kingdom so far has 3,983 confirmed cases of coronavirus, after 66,976 people were tested, though the government’s scientists say it is raging across London, partly as some people are not obeying government advice to isolate.

At total of 177 people with the virus have died so far across the country.

Johnson said pubs, restaurants, theatres, nigthtclubs, cinemas and gyms and leisure centres were being asked to close on Friday night and to stay shut indefinitely.

“We are telling cafes, bars and restaurants to close tonight as soon as they reasonably can and not to open tomorrow,” Johnson told reporters in Downing Street. “Though to be clear, they can continue to provide takeout services.

“Some people may of course be tempted to go out tonight, and I say to those people, ‘please don’t,’” Johnson said.

Johnson’s finance minister Rishi Sunak launched a gigantic stimulus package to stabilise Britain’s virus-hit economy on Friday, including the government paying the wages of workers up and down the country. [L8N2BD2UN]