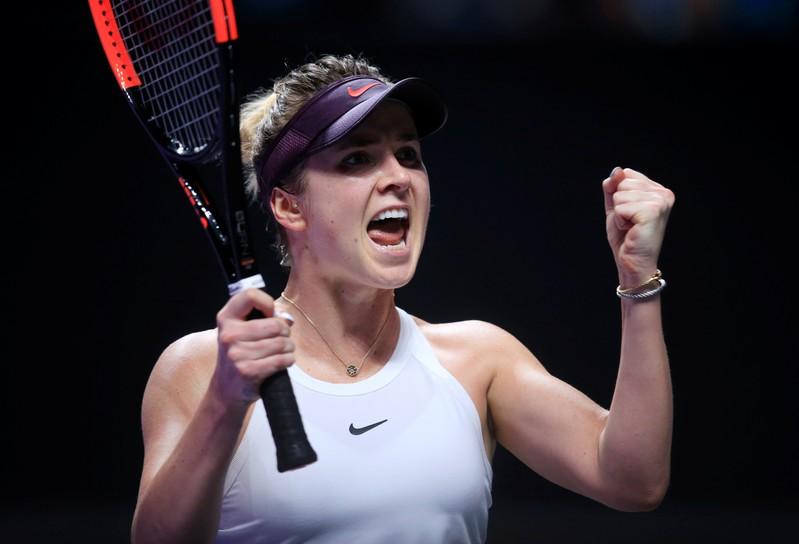 HONG KONG (Reuters) – Defending champion Elina Svitolina became the first player to secure a semi-final spot at the WTA Finals on Wednesday with a straight sets win over Simona Halep while Bianca Andreescu retired injured in her meeting with Karolina Pliskova.

The 19-year-old U.S. Open champion pulled out after the end of the first set having lost 6-3 after suffering an injury to her left knee midway through the third game.

Andreescu had won the first two games but struggled after a lengthy medical timeout left her with a heavily strapped leg and she conceded defeat after Pliskova fired down a set-winning ace in the ninth game.

“I was actually looking forward to this match because I think I started well with a good match against Svitolina,” said Pliskova, who lost her opener against the Ukrainian in straight sets.

“I was really pumped for today but I’m sorry she had to retire.

“Everybody is a little bit tired at this part of the season so it’s tough to play, but hopefully she can be ready for her next match, and if not then Australia.”

Pliskova will now face Halep in the pair’s final game in the Purple Group on Friday knowing a win will take her into the semi-finals alongside Svitolina, who took advantage of an error-strewn display by the Romanian to pick up her second win of the week.

Svitolina sealed a 7-5 6-3 victory over the Wimbledon champion as she notched up her second win a row two days after defeating Pliskova to guarantee a top two finish in the round-robin phase of the competition.

“It was an extremely physical match and we were both chasing a lot of balls and we left a lot of energy out on the court,” said Svitolina.

“I was still playing very solid today and my defense was very good so I’m very happy about that.

“I was expecting a tough match here when I arrived and I had to stay really focused on each game of each match and hopefully I can keep up this level and play strong in the next match as well.”

Svitolina made a strong start to the match, breaking Halep early to establish a three-game lead only for the Romanian to break back and level the scores midway through the set.

Proceedings looked destined to go to a tiebreaker until a series of unforced errors by Halep – who notched up 21 in the first set – in her final service game allowed Svitolina to claim the set.

While Halep reduced the errors in the second set, she was unable to rein in Svitolina, who broke in the penultimate game before claiming the match.