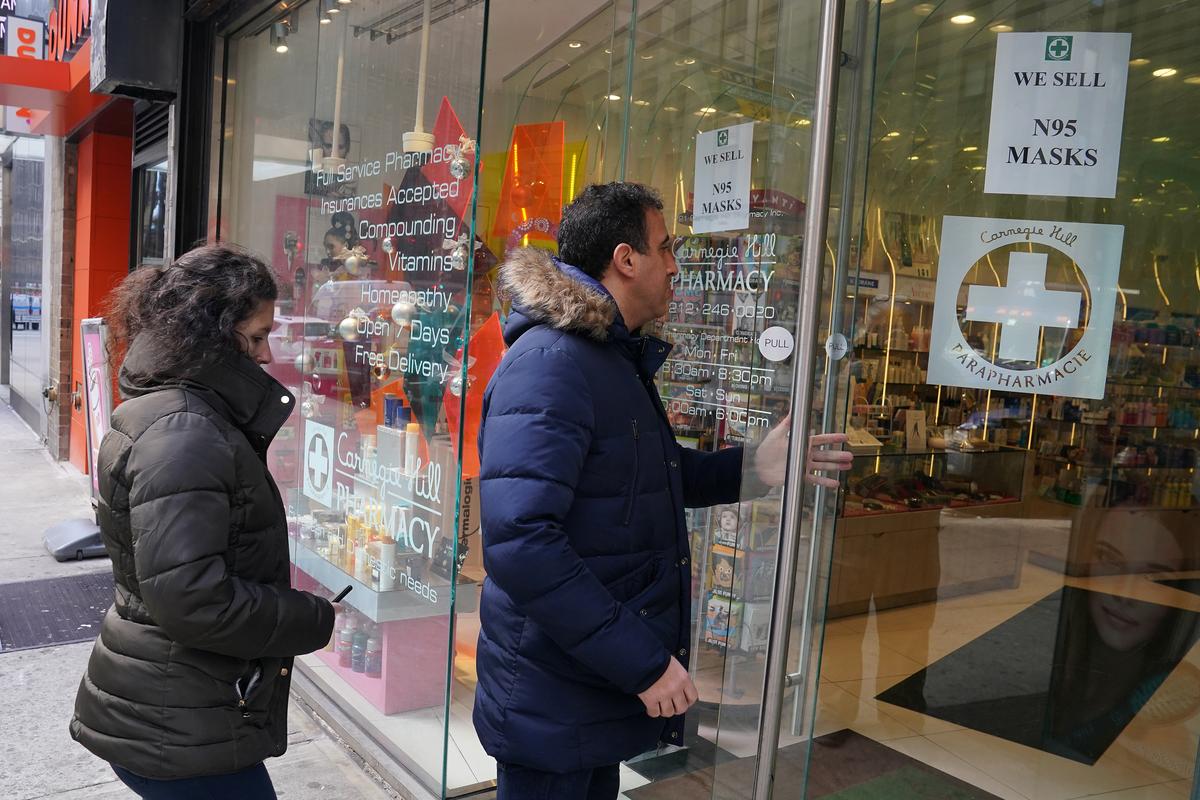 NEW YORK/WASHINGTON (Reuters) – U.S. stocks plummeted on Thursday as fears about the effect of the coronavirus outbreak on economic growth flared even as U.S. officials pledged that they were stepping up efforts to safeguard Americans from the virus’ spread.

People walk into a pharmacy to buy N95 masks in advance of the potential coronavirus outbreak, in the Manhattan borough of New York City, New York, U.S., February 27, 2020. REUTERS/Carlo Allegri

A day after President Donald Trump told Americans that the risk from coronavirus remained “very low,” the S&P 500 .SPX logged its fastest correction in history in a sixth straight day of declines.

During an interagency call on Wednesday, officials from Health and Human Services (HHS) and the Department of Homeland Security (DHS) discussed the possibility of invoking the Defense Production Act for the manufacture of “personal protective equipment” that can be worn by healthcare workers to prevent infection, according to a DHS official.

A White House official confirmed that the administration was exploring the use of the law to spur manufacturing of protective gear. Both officials requested anonymity to discuss the issue.

Director Robert Redfield told lawmakers the Centers for Disease Control and Prevention (CDC) has revised its criteria for who should be tested for the coronavirus and was shipping more test kits to states.

California only has about 200 test kits, an “inadequate” number, but has been in “constant contact with federal agencies” who have promised to send a fresh supply in coming days, Governor Gavin Newsom told a news briefing earlier.

Quick confirmation of coronavirus cases is crucial to rapid response by local health authorities, and states previously reported that some test kits provided by CDC were producing inconclusive results.

HHS Secretary Alex Azar told a House of Representatives committee on Thursday that at least 40 public health labs should now be able to test specimens for coronavirus and that could more than double as soon as Friday.

Some state and local public health workers have expressed doubts about how quickly the country will be able to scale up its testing capability, however.

Scott Becker, the CEO of the Association of Public Health Laboratories (APHL), said his group had worked with the CDC and the Food and Drug Administration to develop a way to quickly increase testing capacity but these tests will still have to be validated by states, which could take several days.

“If quality control goes well as expected by the end of next week, upwards of 40 labs will have testing capabilities in addition to the 12 we have,” Becker told Reuters.

The number of confirmed U.S. cases is still relatively small at 60, most of them repatriated American passengers from the Diamond Princess cruise ship docked in Japan.

Funding to combat the health crisis has become a political issue in an election year. Trump, a Republican, is seeking $2.5 billion from Congress to boost the government’s response. Senate Democratic Leader Chuck Schumer has called for $8.5 billion.

Senate Majority Leader Mitch McConnell said he expected the divided U.S. Congress would make an urgent bipartisan effort to come up with legislation to fund the fight.

“I hope they can work expeditiously so the full Senate would be able to take up the legislation within the next two weeks,” said McConnell, speaking on the Senate floor.

China, where the coronavirus started, has borne the brunt of the outbreak, recording nearly 80,000 infections and more than 2,700 deaths. The virus has spread to another 44 countries, where around 3,500 cases and 54 deaths have been reported.

But with new infections reported around the world now surpassing those in mainland China, World Health Organization Director General Tedros Adhanom Ghebreyesus said even rich nations should prepare for surprises.

“No country should assume it won’t get cases, that would be a fatal mistake, quite literally,” Tedros said.

Various treatments are being tested for the virus, which can lead to pneumonia, but a vaccine may take up to 18 months to develop, health officials have said.

Trump has been increasingly alarmed by the reaction of the markets, which he considers a barometer of the economy’s health and sees as important to his re-election in November.

On Wednesday he blamed Democrats competing to be their party’s nominee to run against him as well as two cable TV news channels, CNN and MSNBC, for spooking investors.

On Thursday, Democrats went on the offensive.