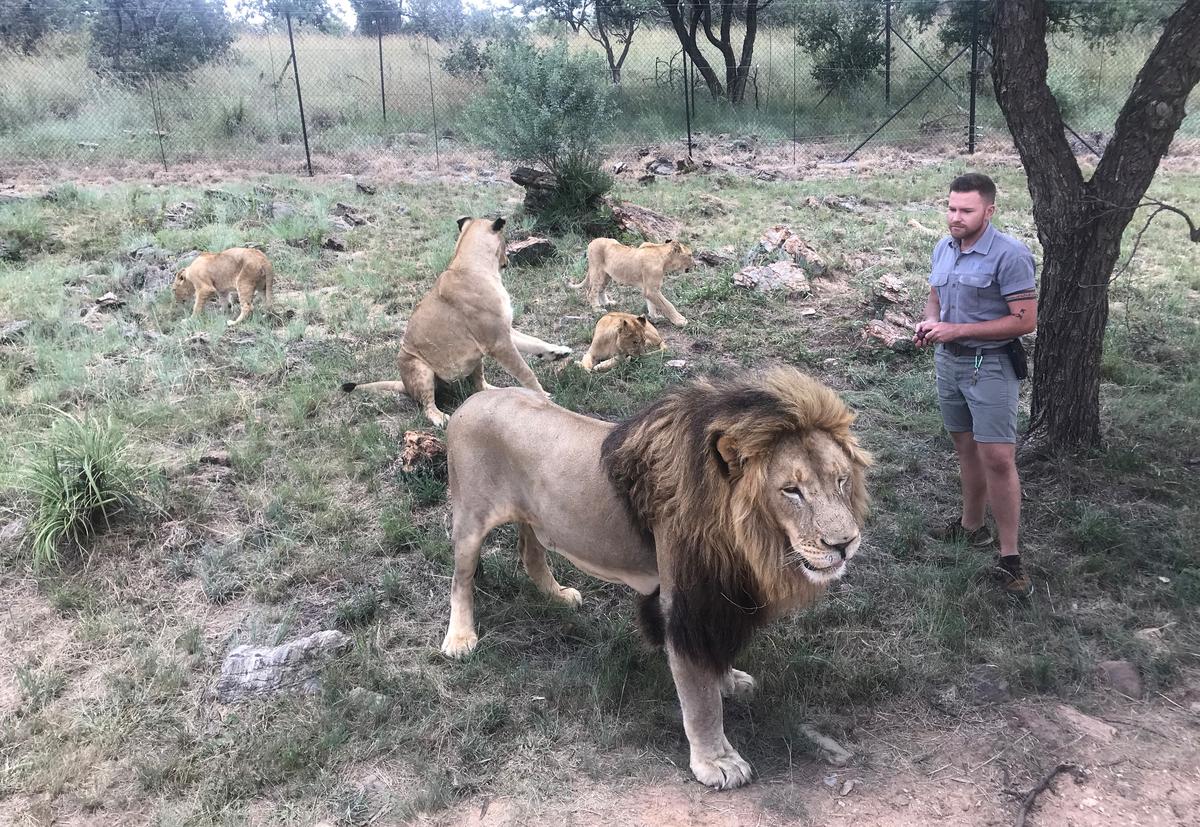 JOHANNESBURG (Reuters) – A cheetah strides up to third generation animal trainer Shandor Larenty and lets him stroke its fur while he throws chunks of meat to the rest of the coalition at the Johannesburg Lion & Safari park.

At 25 years old, Larenty has been training wild animals to be docile around tourists for the past 13 years and said he would be devastated if he had to stop because of growing ethical concerns over tourist animal interactions.

“These guys are our family, we have a very strong emotional connection. You can see these guys want to be with me,” he said.

“For someone to say, ‘hey, you can’t do that anymore’, that’s like someone saying to you: ‘hey I’m taking your children away.’. This is my life.”

Last year South Africa’s tourism association, SATSA, issued new guidelines condemning the common practice of breeding big game in captivity for the entertainment of tourists. The move answered a call from animal welfare activists who argue the trivial amusement of one species is inflicting untold cruelty on others.

“It is unnatural for these animals to be in close proximity to humans,” Keira Powers, chairperson of SATSA’s Animal Interaction Committee, told Reuters in Cape Town.

“It is extremely stressful to be touched by humans and (have them) walking with them,” she said.

SATSA is calling on animal breeders to end all entertainment involving performing animals, and wind up all up-close or tactile interactions with big game, including activities such as walking with predators and riding on elephants that have drawn hundreds of thousands of tourists over the years.

The guidelines are non-binding, and the government’s tourism department, while welcoming them, has no plans to outlaw animal interactions, which remain a significant pillar of South Africa’s tourism sector.

Andre La Cock, who runs the lion park on the outskirts of Johannesburg, thinks the guidelines are wrongheaded.

“Our lions lead very happy lives,” he said, as one of his open-top trucks drove past a pride resting under a thorn tree in their enclosure.

Yet young cubs are often removed from their mothers, causing huge distress to both, and the space available in most enclosures is far too small to meet their natural roaming instincts, Fiona Miles, country manager of NGO Four Paws, said.

“We do admit that if cubs are needed for cub interaction, we sometimes remove the cubs from their mothers. This is obviously stressful for the mother and we regret that it is necessary,” La Cock said.

In 2016 he briefly stopped offering visitors the option to cuddle lion cubs and to walk with adult lions, but the number of tourists, who make up about a third of the park’s revenues, plummeted and La Cock reversed his decision.

“Lions should not be used as props,” Miles said. “There’s no conservation value in breeding lions in captivity and there’s definitely no educational value.”