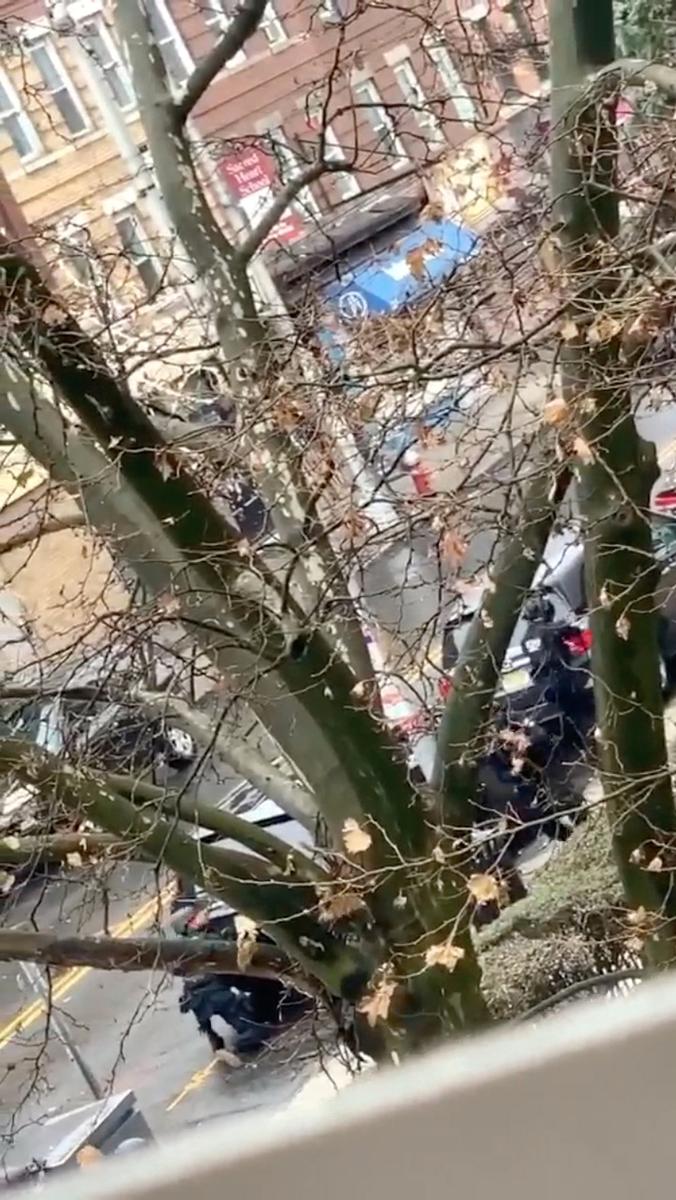 NEW YORK (Reuters) – Six people, including a police officer and two suspected gunmen, were killed in an hours-long shootout that unfolded on Tuesday afternoon near a cemetery and a kosher grocery store in Jersey City, New Jersey, police said.

The two gunmen and three civilian victims were pronounced dead inside the JC Kosher Supermarket. The slain police detective was fatally wounded near a cemetery about a mile away where the shooting apparently started when he tried to intercept one of the suspects, Kelly said

There was no immediate evidence the bloodshed was a hate crime or terror-related, he told reporters.

Kelly said he believed the civilians and the detective were all struck by gunfire from the suspects, who arrived in a stolen U-Haul truck and held police at bay around the store for hours before the shooting ended.

“Their movement was rapid and continuous for four hours within that area,” the chief said at an evening news conference. He described the crime scene as “very extensive,” encompassing at least three locations. Hundreds of rounds were fired, he said.

Kelly said investigators believed the U-Haul vehicle contained what may have been an “incendiary device,” which he said was removed and taken away for examination by police bomb squad personnel.

Two more police officers and a civilian were wounded but were reported in stable condition, the Hudson County Prosecutor’s Office posted on Twitter. Police said the two wounded officers were later released from the hospital.

The officer who died was identified as Joe Seals, a married father of five who had been with the Jersey City force since 2006, Mayor Steven Fulop told reporters.

The suspects fled the area of the cemetery in a truck and eventually ended up at the kosher supermarket, where they opened fire on police officers and civilians, the New York Times reported, citing officials. Investigators believe the store was chosen randomly, according to the newspaper.

The standoff prompted a massive law enforcement deployment with local SWAT teams and federal agents rushing to the scene, as well as emergency services from the neighboring New York City Police Department.

All schools in Jersey City were placed on lockdown, which was lifted later in the afternoon, according to the mayor and local media.

“Oh my god, it’s like a movie. It’s crazy. … Nothing I’ve ever seen before. I’m still shaking,” an unidentified resident of the area told NBC’s New York affiliate.

Kelly said the incident occurred in an “up and coming” neighborhood of Jersey City, a racially mixed town of about 265,000 residents.

Police officers use vehicles for protection during a shootout in Jersey City, New Jersey, U.S. December 10, 2019 in this still image obtained from a social media video. @GABRIELANGELVALLE /via REUTERS

“This neighborhood has had challenges. It has become a much safer, much better neighborhood over the last two years, three years or so,” the police chief said. “We can only say folks that live in the neighborhood support the police department. They were out there today showing support.”

U.S. President Donald Trump said on Twitter: “Just received a briefing on the horrific shootout that took place in Jersey City, NJ. Our thoughts & prayers are w/ the victims & their families during this very difficult & tragic time.

“We will continue to monitor the situation as we assist local & state officials on the ground,” Trump wrote.