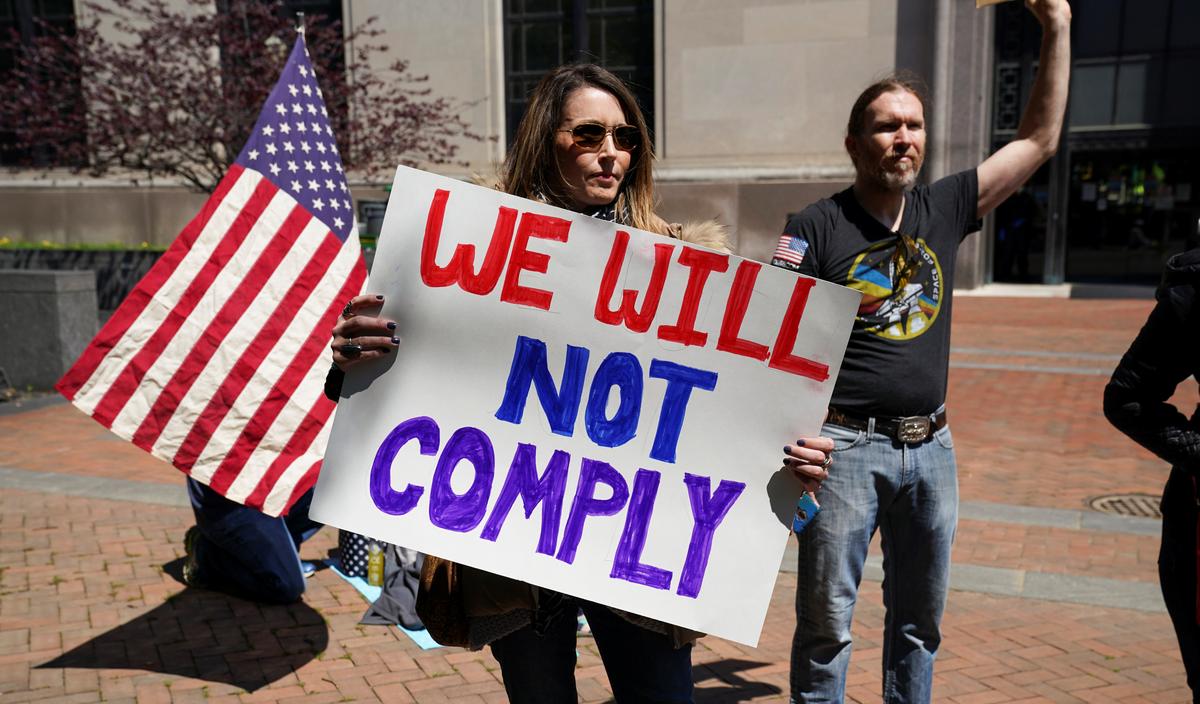 DETROIT (Reuters) – As sweeping stay-at-home orders in 42 U.S. states to combat the new coronavirus have shuttered businesses, disrupted lives and decimated the economy, some protesters have begun taking to the streets to urge governors to rethink the restrictions.

A protestor carries a sign reading “We Will Not Comply” during a demonstration outside the Virginia State Capitol to protest Virginia’s stay-at-home order and business closures in the wake of the coronavirus disease (COVID-19) outbreak in Richmond, Virginia, U.S., April 16, 2020. REUTERS/Kevin Lamarque

A few dozen protesters, many with young children, gathered in Virginia’s state capital of Richmond on Thursday in defiance of Democratic Governor Ralph Northam’s mandate, the latest in a series of demonstrations this week around the country.

The protests have taken on a partisan tone, often featuring supporters of President Donald Trump, and critiquing governors whose shelter-at-home directives are intended to slow the spread of a pandemic that has killed more than 31,000 across the United States.

On Wednesday, thousands of Michigan residents blocked traffic in Lansing, the state capital, while protesters in Kentucky disrupted Democratic Governor Andy Beshear’s afternoon news briefing on the pandemic, chanting “We want to work!”

States including Utah, North Carolina and Ohio also saw demonstrations this week, and more are planned for the coming days, including in Oregon, Idaho and Texas.

The United States has seen the highest death toll of any country in the pandemic, and public health officials have warned that a premature easing of social distancing orders could exacerbate it.

Trump has repeatedly said he wants to “reopen” the economy as soon as possible and has clashed with governors over whether he can overrule their stay-at-home orders.

In Michigan, where Democratic Governor Gretchen Whitmer has imposed some of the country’s toughest limits on travel and business, some protesters at “Operation Gridlock” wore campaign hats and waved signs supporting Trump.

Whitmer is considered a top candidate to be the running mate of Democratic presidential nominee Joe Biden when he takes on Trump in November’s general election.

One of the organizers of the demonstration in Lansing, Meshawn Maddock, said she was frustrated that much of the media focused on a handful of protesters who gathered on the steps of the capitol, including militia group members and a man holding a Confederate flag who she said were not part of the rally.

She faulted Whitmer for dismissing the event as a partisan rally instead of engaging with the thousands of residents who Maddock said have legitimate questions about the governor’s stay-at-home order.

“When I’m fighting to (help) a guy who cleans pools or mows lawns, or a women who wants to sell her onion sets or geraniums, I don’t care whether they vote Republican, Democrat, or never vote at all,” Maddock said.

Maddock, 52, is among seven board members of the Republican-aligned Michigan Conservative Coalition who organized the protest. She is also a board member of the pro-Trump political action committee Women for Trump, but said the Trump campaign had no involvement in organizing the protest.

“The Trump campaign has given me no messaging,” she said. “All I know is that I care about Michigan. I’ve lived here my whole life and I want to help workers get back to work.”

Maddock owns A1 Bail Bonds in Milford with her husband Matt Maddock, a Republican state representative, and said she has had to lay off seven people due to the coronavirus.

She said she had received calls from people in Wisconsin, Pennsylvania, Virginia and other states asking for advice on planning similar protests.

The political wrangling over the COVID-19 crisis has begun to take on familiar partisan battle lines. Typically Democratic strongholds in dense urban centers such as Seattle and Detroit have been hard hit by the virus, while more Republican-leaning rural communities are struggling with the shuttered economy but have seen fewer cases.

Kenny Clevenger, 30, a realtor in western Michigan’s Allegan County, where only 25 coronavirus cases have been identified, said the shutdown had put him out of business.

“Yes, this needs to be taken seriously, but it’s being taken advantage of,” Clevenger said. “People believe Democrats are attempting to use this to undermine the economy, once again just attacking the president.”

Increasingly, Republican state lawmakers, including some in Texas, Oklahoma and Wisconsin, have begun putting pressure on governors to reopen states for business. In Pennsylvania this week, the Republican-led legislature passed a bill that would loosen restrictions, though Democratic Governor Tom Wolf was expected to veto it.

The protests do not appear to be coordinated at a national level, though there are some similarities in the Facebook groups that have announced them.

Reporting by Joseph Ax in West Stockbridge, Massachusetts and Michael Martina in Detroit; Additional reporting by Makini Brice in Washington and Julio-Cesar Chavez in Richmond, Virginia; Editing by Daniel Wallis