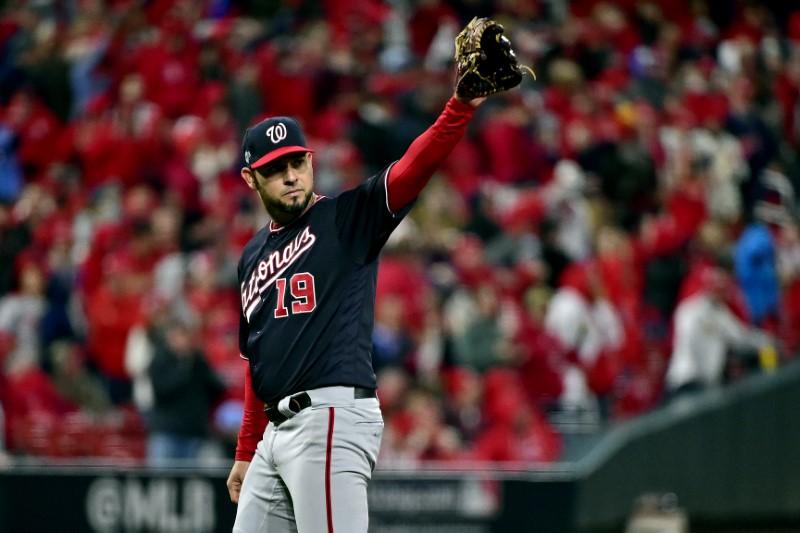 (Reuters) – Anibal Sanchez contemplated retiring from Major League Baseball in the past but rejuvenated his career and now has a chance to put the Washington Nationals on the cusp of a World Series title in the biggest game of his life.

The veteran right-handed pitcher will start Game Three of the World Series on Friday where the host Nationals will look to take a commanding 3-0 lead over the Houston Astros in the best-of-seven championship.

Sanchez has been stellar in the postseason for the Nationals and, while he will have had a two-week layoff between starts by the time he takes the mound on Friday, he said he is not at all concerned about any rust.

“I just think most of the time, like right now probably you need to rest because I’ve been throwing baseball since February, probably January,” Sanchez told reporters on Thursday. “So right now it’s not something that’s going to affect you.”

Sanchez has been excellent in his two starts this postseason, during which he has a 1-0 record with a miniscule 0.71 earned run average.

When Sanchez took the mound in the National League Division Series it was on 10 days rest and he looked solid as he struck out nine batters through five innings before leaving a game his team went on to lose.

Sanchez was even better in his next outing as he took a no-hit bid into the eighth inning of the NL Championship Series opener against St. Louis.

It has been a remarkable turnaround considering Sanchez, in his first season with a Nats team that boasts a highly touted rotation featuring Max Scherzer, Stephen Strasburg and Game Four starter Patrick Corbin, started the year 0-6 after nine starts.

But Sanchez, who resurrected a career that seemed all but over after a miserable three-year stretch with the Tigers from 2015-17, went 11-2 the rest of the regular season.

“Everybody talks about our big three, but Anibal has pitched unbelievable,” said Nationals manager Dave Martinez. “He gives us a chance to win ball games every outing.

“He’s got great command of all his pitches, which is a lot. Hopefully he goes out and keeps us in the ball game and we have a chance to win again.”

Reporting by Frank Pingue in Toronto; Editing by Paul Tait