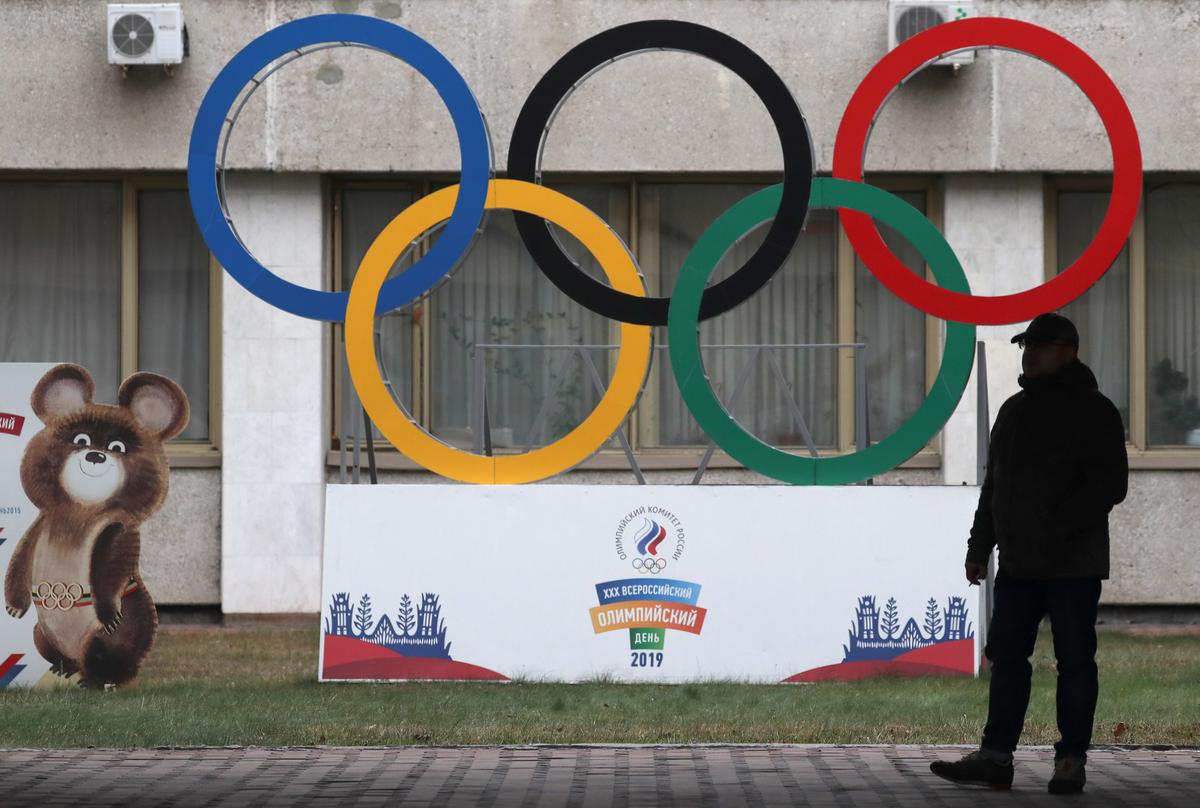 LAUSANNE/MOSCOW (Reuters) – Russia was banned from the world’s top sporting events for four years on Monday, a period that includes the next summer and winter Olympics and the 2022 World Cup in Qatar, for tampering with doping-related laboratory data.

FILE PHOTO: A man stands in front of the Olympic rings outside the headquarters of the Olympic Committee of Russia in Moscow, Russia November 28, 2019. REUTERS/Evgenia Novozhenina

The decision by the World Anti-Doping Agency (WADA) is a serious blow to Russia’s already tarnished sporting reputation and a disappointment for Russian sportsmen and sportswomen, who will not now be able to perform at the Olympics under their own flag and national anthem.

WADA’s executive committee in Switzerland acted after concluding that Moscow had tampered with laboratory data by planting fake evidence and deleting files linked to positive doping tests that could have helped identify drug cheats.

The decision to punish Russia with a ban was unanimous. It showed the agency’s determination to act resolutely to tackle the Russian doping crisis, WADA president Craig Reedie said.

“For too long, Russian doping has detracted from clean sport,” Reedie said in a statement.

“The blatant breach by the Russian authorities of RUSADA’s reinstatement conditions…demanded a robust response. That is exactly what has been delivered today.”

Russia, which has tried to showcase itself as a global sports power, has been embroiled in doping scandals since a 2015 report commissioned by the World Anti-Doping Agency (WADA) found evidence of mass doping in Russian athletics.

Its doping woes have only grown since, with many of its athletes sidelined from the past two Olympics and the country stripped of its flag altogether at last year’s Pyeongchang Winter Games as punishment for state-sponsored doping cover-ups at the 2014 Sochi Games.

Monday’s sanctions, which also include a four-year ban on Russia hosting major sporting events, were recommended by WADA’s compliance review committee in response to the doctored laboratory data provided by Moscow earlier this year.

One of the conditions for the reinstatement of Russian anti-doping agency RUSADA, which was suspended in 2015 in the wake of the athletics doping scandal but reinstated last year, had been that Moscow provide an authentic copy of the laboratory data.

The sanctions effectively strip the agency of its accreditation.

RUSADA head Yuri Ganus could not be immediately be reached for comment. His deputy, Margarita Pakhnotskaya, told the TASS news agency that WADA’s decision had been expected.

Russia’s punishment leaves the door open for clean Russian athletes to compete at major international sporting events without their flag or anthem for the next four years, something they did at the 2018 Pyeongchang Olympics.

“I think this is not a catastrophe for Russian sport,” Dmitry Svishchev, president of Russia’s curling federation, told Reuters.

“We will be either under the Russian Olympic Committee flag or as neutrals. We have gone through this before at the last Olympics. There is nothing horrible about this. We will not love our athletes any less.”

He said there would be additional psychological pressure on Russian athletes however who would fret about what flag they would compete under.

Some Russian officials have tried to cast WADA’s behavior as part of what they say is a broader Western attempt to hold back the country.

Igor Lebedev, a lawmaker and deputy speaker of Russia’s lower house of parliament, said on Monday the move was a serious blow to Russian sport that required a tough response from Russia’s authorities, the RIA news agency reported.

If RUSADA appeals WADA’s punishment, the case will be referred to the Court of Arbitration for Sport.

While the United Kingdom Anti-Doping Agency and others were quick to applaud the sanctions, some thought they did not go far enough.

“I wanted sanctions that cannot be watered-down. I am afraid this is not enough,” said WADA Vice President Linda Helleland on Twitter. “We owe it to the clean athletes to implement the sanctions as strong as possible.”