The highly controversial move by the US Supreme Court to end women’s right to abortion is the latest example of how the country is lurching to the right on a number of important issues.

With the decision leaving many Americans feeling disenfranchised and frightened about the direction their country is headed, Canada could be an ideal destination for those who have simply had enough of the US.

Overturning Roe vs Wade triggered the closure of abortion clinics across the country, with some states already having laws in place to ban abortion in anticipation of the Supreme Court’s decision.

In the same week, as Democrat President Joe Biden celebrated the successful passing of mild gun control measures, the Supreme Court moved to make it easier to carry firearms by overturning a 1913 New York licensing law.

This came despite 225 mass shootings in the US in 2022 (or more than one a day), including the bloody massacre of 19 school children and two teachers in Uvalde, Texas on May 24.

Same sex marriage and contraception could be next, with Justice Clarence Thomas suggesting the Supreme Court could reconsider a slew of decisions, placing further constitutional rights under threat.

The controversy dates back to the presidency of Donald Trump, when he was able to nominate three new Supreme Court justices – namely Neil Gorsuch, Brett Kavanaugh and Amy Coney Barrett – and significantly shift the balance of the bench to the right with Associate Justice Clarence Thomas, appointed amid controversy in 1992, leading the conservative bench.

The Trump appointees left many Americans fearful of the consequences, and now those fears are being realised.

Even before Trump’s Supreme Court picks, Americans were already considering their options to move north. His election victory over Hillary Clinton triggered a huge surge in the number of Americans researching how to move to Canada.

The number of American citizens becoming Canadian permanent residents rose in every year of the Trump presidency except the last, from 7,655 in pre-Trump 2015, to a peak of 10,900 in 2018, his third year in power. 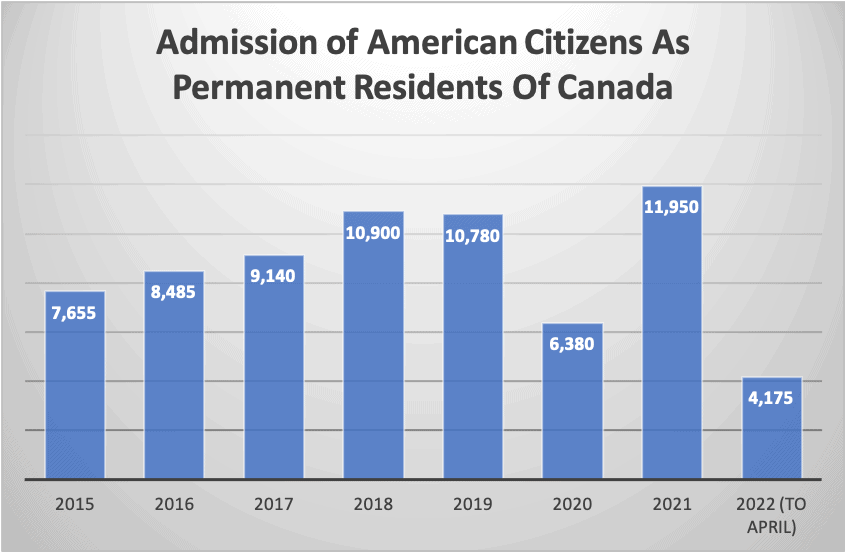 Canada has a plethora of options for American citizens who wish to immigrate here.

In addition to economic programs, Canada also has an established family sponsorship immigration program, which include options for LGBTQ couples and common law partners.

With provincial programs also welcoming newcomers under a wide variety of criteria, American citizens interested in moving to Canada have many pathways open to them.

What Are the Options for Immigrating to Canada from the USA?

Broadly, the options are:

Canada accepts the largest number of immigrants under the economic class, with annual levels set to reach nearly 270,000 by 2024.

The largest group within the economic class is the Federal High Skilled category.

There are many immigration streams to be considered when considering applying for Canadian permanent residence from the USA.

Express Entry requires candidates to submit a profile, with the highest scoring profiles issued an Invitation to Apply to one of the above immigration programs.

Candidates then get 60 days to submit a full application.

What Is the Express Entry Process?

One of the best ways to increase a CRS score is with a job offer, which can be worth 200 or 50 points depending on the skill level. Visit skilledworker.com, the leader in foreign recruitment, to access our job search services.

A provincial nomination is worth 600 points and effectively guarantees an Invitation to Apply.

If you meet the requirements, Express Entry can be a fast way to achieve Canada immigration, with target processing times of six months once the full application is received.

What Are Canada’s Provincial Programs?

If you do not qualify through a federal economic program, the next step is to consider provincial streams for your application for permanent residence from the USA.

Each one of Canada’s provinces runs their own immigration programs, targeting the specific demands of local labour markets.

If you have specific skills, there could be a provincial stream waiting to accept you.

Quebec has autonomy over economic based immigration and admits immigrants under its  immigration system, with the right to set its own immigration levels and the power to operate its own programs.

Quebec recently launched an Expression of Interest system similar to Express Entry, where candidates submit profiles to the Arrima system and are issued periodic invitations to apply.

Can I Apply for A Business Immigration Program?

Canada also aims to attract entrepreneurs and investors through its business immigration programs, with many applications accepted from the USA.

At the federal level, options include:

The program targets innovative entrepreneurs and links them with private sector investors in Canada who will help establish their start-up business.

Candidates can initially come to Canada on a work permit supported by their designated Canada-based investor, before qualifying for permanent residence once their business is up and running.

There are three types of private-sector investor:

Initially a three-year pilot, the program was made permanent on March 31, 2018.

What Are the Start-Up Visa Candidate Eligibility Requirements?

The basic candidate eligibility requirements for the Start-Up Visa are:

What Is A Start-Up Visa Program Designated Entity?

The required commitment must meet the following criteria:

What Are the Start-Up Visa Program Business Ownership Requirements?

For the candidate to qualify for permanent residence:

One of Canada’s most popular business programs is the Quebec Immigrant Investor Program.

It is the only passive investment program that leads to Canadian permanent residence.

Intake for the Quebec Investor is currently paused.

Several of Canada’s other provinces also operate business programs as a route to permanent residence from the USA.

Increasingly, the provinces require time spent in Canada setting up a business as a temporary resident before candidates are nominated for permanent residence.

Can I Transition from Temporary to Permanent Residence?

Increasingly, immigrants are coming to Canada as temporary residents and transitioning to permanent residents.

This is a popular route for candidates who do not immediately qualify for permanent residence when applying from the USA.

Time spent in Canada as a temporary resident counts towards a permanent residence application.

Caregivers also have their own streams for work permits (under the TFWP) and transition to permanent residence.

What Is Family Class Immigration?

Candidates in the USA with family members who are already permanent residents or citizens can apply through Family Class Sponsorship immigration.

Which Family Members Can Be Sponsored for Canada Immigration from the USA?

What Are the Requirements to Be A Sponsor?