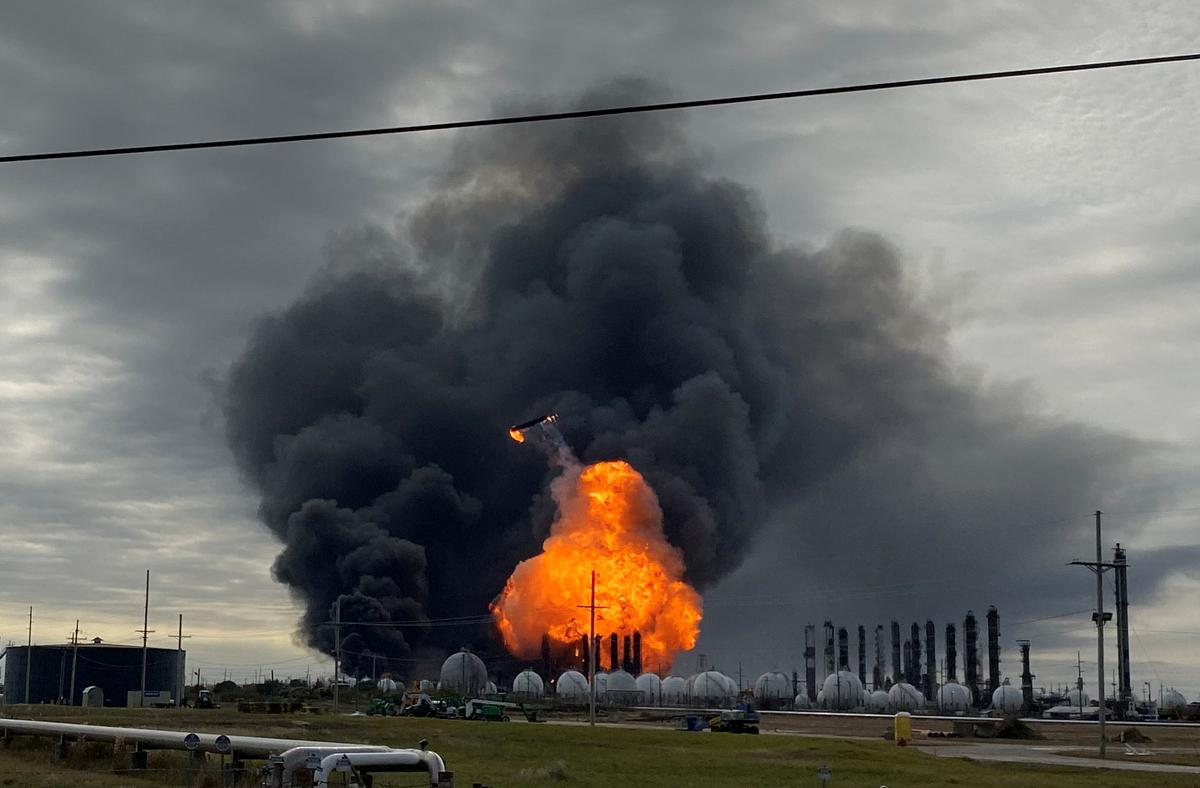 PORT NECHES, Texas (Reuters) – Three workers were injured and residents of four towns were told to evacuate after explosions on Wednesday at a Texas petrochemical plant, the latest in a series of chemical plant accidents in the region.

Flames are seen after a massive explosion that sparked a blaze at a Texas petrochemical plant in Port Neches, Texas, U.S., November 27, 2019.  REUTERS/Erwin Seba

An early morning blast at a TPC Group complex in Port Neches, Texas, was followed by a series of secondary explosions that shattered windows and blew locked doors off their hinges.

Jefferson County officials ordered residents within a four-mile (6.4 km) radius of the facility to leave after a distillation column blew up about 2 p.m. (2000 GMT)

The mandatory evacuation covers Port Neches and Groves, and portions of Nederland and Port Arthur, Texas, officials said. About 60,000 people live within the four-mile radius.

The plant sits on a 218-acre (88.22 hectares) site located about 90 miles (145 km) east of Houston. It processes petrochemicals used to make synthetic rubber and resins, and a gasoline additive. TPC is nestled among several other chemical complexes that were not affected by the flames.

Peyton Keith, a TPC spokesman, said fire officials were determined to let the fire in a butadiene processing unit burn itself out, and were attempting to keep the flames from spreading. He could not say when the fire could be extinguished.

A smoky plume visible from miles away released volatile organic compounds that can lead to eye, nose and throat irritation, shortness of breath, headaches and nausea, pollution regulator Texas Commission on Environmental Quality (TCEQ) said. No impact to water was reported.

Toby Baker, TCEQ executive director, criticized the “unacceptable trend of significant incidents” in the region and pledged to review the state’s compliance efforts.

The fiery blast caused extensive damage to operations at the TPC site and followed other fires at petrochemical producers and storage facilities in Texas.

A March blaze at chemical storage complex outside Houston burned for days and was followed a month later by another at a KMCO LLC plant northeast of Houston that killed one worker and injured a second. A fire at an Exxon Mobil Corp (XOM.N) chemical plant in Baytown, Texas, in July injured 37.

People more than 30 miles away from the complex were shaken awake by the 1 a.m. CT (0700 GMT) explosion, sources familiar with the fire-fighting and rescue operations said.

The blast collapsed a roof over the plant’s control room, sending workers fleeing, and damaged its fire-fighting system. The suppression system was restored later in the day, Keith said.

Some homes close to the plant also sustained heavy damage, and police had gone door-to-door early in the morning to check if residents were injured, said the Jefferson County Sheriff’s Office.

One of the three injured workers was flown by helicopter to a Houston Hospital. All three were treated and released, Keith said.

The plant employs 175 people and routinely has 50 contract workers on site.

“We cannot speak to the cause of the incident or the extent of damage,” the company said.

TPC processes petrochemicals for use in the manufacture of synthetic rubber, nylon, resins, plastics and MBTE, a gasoline additive. The company supplies more than a third of the feedstock butadiene in North America, according to its website.

“Right now, our focus is on protecting the safety of responders and the public, and minimizing any impact to the environment,” TPC Group said on its website.