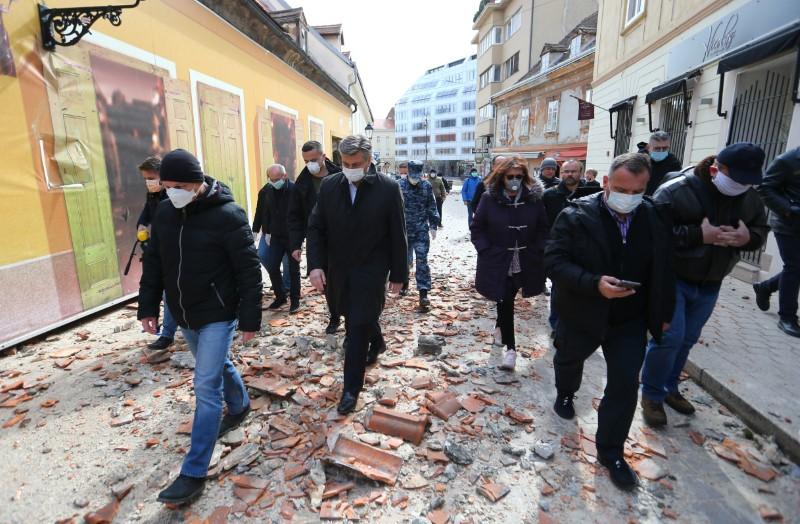 ZAGREB (Reuters) – A large earthquake struck near the Croatian capital Zagreb on Sunday, leaving a teenager critically injured after an apartment building in the city collapsed, the GFZ German Research Center for Geosciences and a hospital official said.

Another minor was badly injured and the quake caused several fires and power blackouts in parts of the capital, hospital and emergency services said.

Prime Minister Andrej Plenkovic called on citizens to remain outside their homes amid potential aftershocks. Plenkovic and Interior Minister Davor Bozinovic also appealed for people rushing onto the streets to keep social distances from each other as the country struggles to contain the spread of coronavirus. So far, Croatia has reported 206 cases of the virus and one death.

Plenkovic said the quake, with a magnitude of 5.3 according to GFZ, was the biggest to hit Zagreb in 140 years. It struck 6 km north of the city and was felt across the Western Balkans.

Zarko Rasic, head of the Zagreb Emergency Medicine Institute, a children’s hospital, said a 15-year-old was in a critical condition after being found by an emergency services team under a collapsed building and another minor had been admitted with head injuries from a falling roof. He did not give further details on the persons’ identities.

Plenkovic said the army had been called in to help clean up debris in Zagreb and urged citizens to “stay outside and keep your distance”.

“The situation is contradictory, we invited people to stay at home to avoid spreading of the corona virus, and now we are advising them to leave their homes,” Plenkovic told a press conference.

GFZ downgraded the magnitude of the quake from an initial reading of 6.0.

“It lasted over 10 seconds. By far the strongest I have ever felt,” one witness said, adding that it was followed by several aftershocks.

A Reuters reporter on the scene saw a church bell tower damaged, some buildings fell down as people fled apartments and took to the streets.

The government convened an urgent cabinet meeting and said it would hold another press conference on Sunday afternoon.