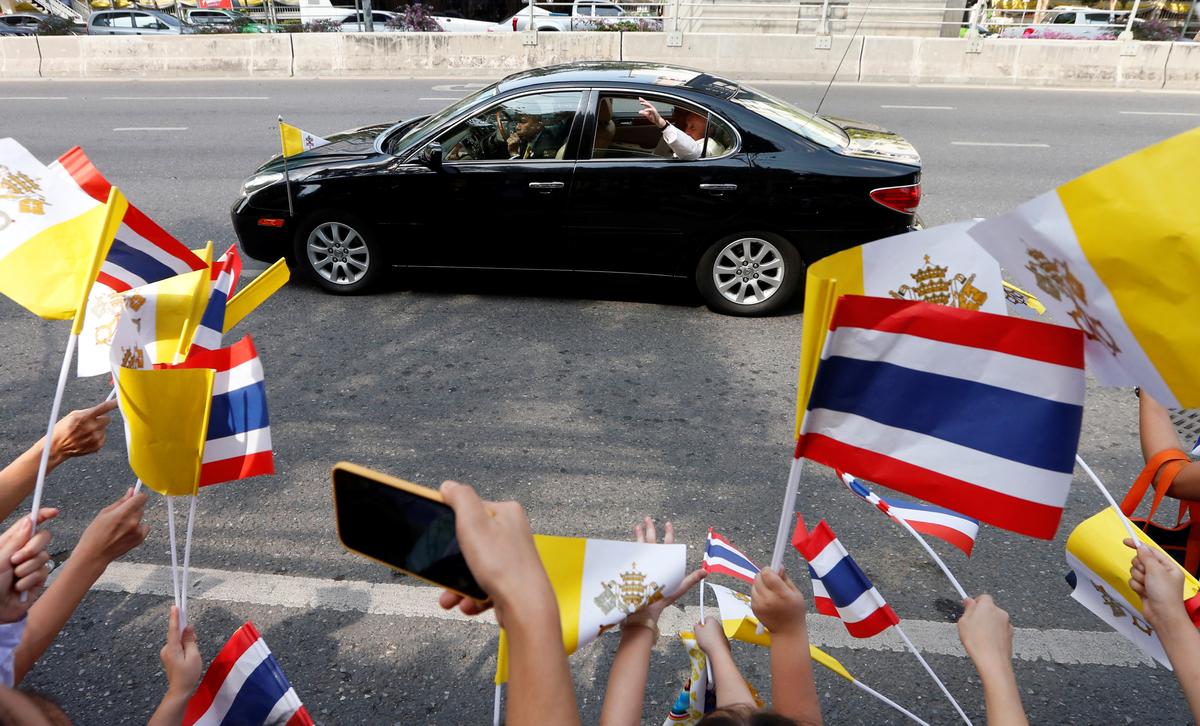 BANGKOK (Reuters) – Pope Francis arrived in Thailand on Wednesday to meet with its small but devoted Catholic minority on a seven-day Asian trip that will include a family reunion in Bangkok and take his anti-nuclear message to Japan.

Waiting for a glimpse of the pontiff, excited Catholics thronged around the Vatican’s Bangkok embassy and St. Louis Hospital to take selfies.

“Once in a lifetime, I want to see him and be able receive prayer from him,” said 60-year-old Orawan Thongjamroon outside the Vatican embassy, where she had been waiting since early morning for the papal motorcade.

Catholics are a tiny minority in mostly Buddhist Thailand, accounting for less than 2% of the population.

The pope’s plane touched down outside Bangkok around midday and he descended to a red-carpet airport welcome from church leaders for a visit that coincides with the 350th anniversary of the first papal mission in Siam, the former name of Thailand.

Among those welcoming him was his cousin and childhood friend from Argentina, 77-year-old nun Sister Ana Rosa Sivori, who has worked in Thai schools for more than 50 years and will be the pope’s personal translator in Thailand.

The pair, whose grandfathers were brothers, beamed as they made their way over the tarmac through crowds of clergy, children and government officials to a waiting motorcade.

“Dear friends in Thailand and Japan, before we meet, let us pray together that these days may be rich in grace and joy,” read a message on the pontiff’s official Twitter account before he left the Vatican.

At Bangkok’s St. Louis Church, a Thai Catholic woman proudly showed photographs of her and Pope Francis from a visit she made to the Vatican with her husband.

“I never thought that I would have another chance to see him again,” said Nuchnaree Praresri, 49.

But when she was invited to be a cleaner at St. Louis Church for the papal visit, she seized the opportunity.

“This might not be an important role for others, but I’m very proud,” she said.

Catholicism first arrived in Thailand in the mid-1500s with Portuguese missionaries and traders, and Catholics have over the years built respected schools and hospitals.

Pope Francis begins his official program on Thursday when he is scheduled to meet King Maha Vajiralongkorn as well as the supreme Buddhist patriarch before offering mass at the National Stadium.

He will hold another mass at Bangkok’s Assumption Cathedral before leaving on Saturday for Japan, where he will visit the nuclear ground zeros of Hiroshima and Nagasaki.