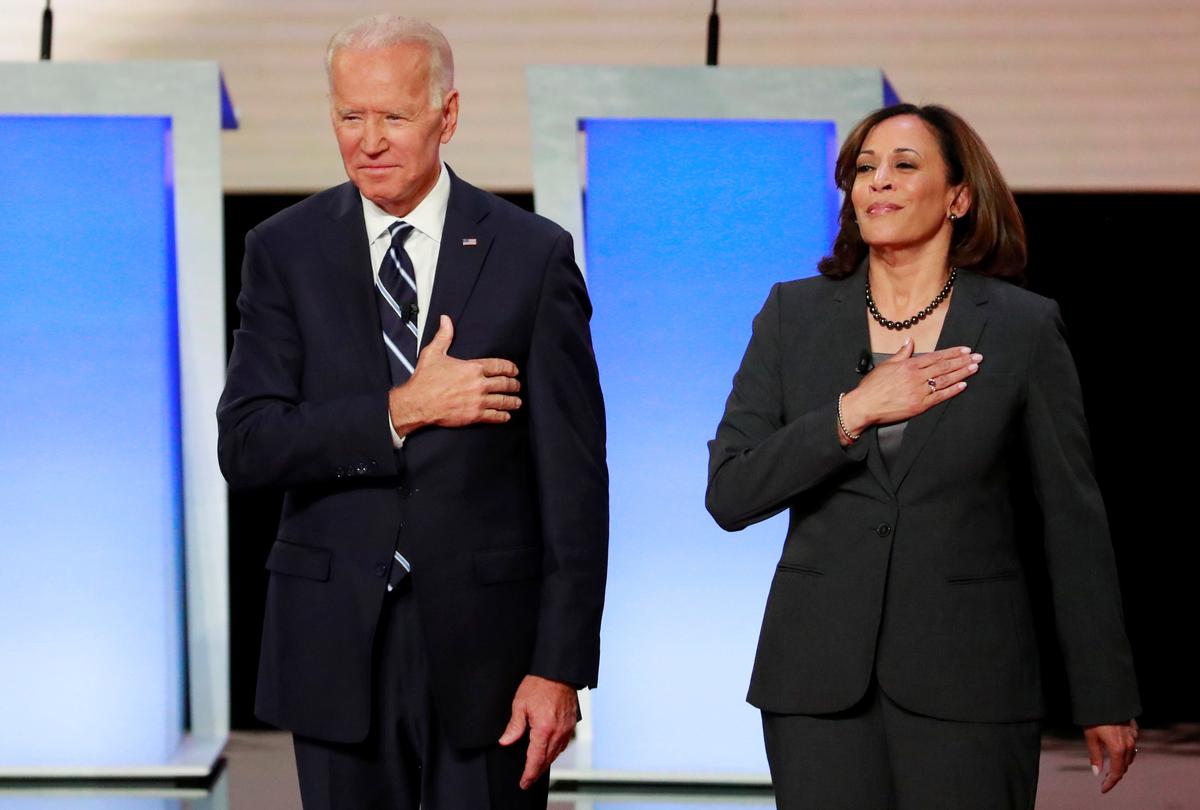 The backing of Harris, a black U.S. senator and former 2020 presidential candidate who clashed with Biden during the party’s early debates, could give him a boost as he and Sanders battle for voters before the next round of nominating contests in six states on Tuesday.

Biden, the Democratic front-runner, campaigned in Mississippi, and the more liberal Sanders was in Michigan, both seeking the party’s nomination to challenge Republican President Donald Trump in November’s election.

Below is a summary of Sunday’s events.

FROM ATTACKER TO BACKER

Harris, who has taken Biden to task over his civil rights record, planned to campaign with him on Monday in Detroit, which has a large African-American population.

“There is no one better prepared than Joe to steer our nation through these turbulent times, and restore truth, honor, and decency to the Oval Office,” said Harris, a first-term senator from California and the state’s former attorney general.

One of the most talked-about moments of Harris’ campaign was her blistering attack on Biden during a June presidential debate. She called his remarks about working with segregationist senators hurtful and questioned Biden’s 1970s opposition to school busing.

Still, black voters have backed Biden overwhelmingly, propelling him to big victories in South Carolina’s Feb. 29 presidential primary and on Super Tuesday last week. They will be crucial in Michigan, where they make up almost 14% of the population and as much as 80% of some areas of Detroit.

A number of Harris backers switched their support to Biden after she dropped out of the race in December. She had struggled to build support and raise money.

Even before she endorsed him, Biden said he would consider Harris as a potential vice presidential running mate.

Sanders garnered his own endorsement on Sunday from the Rev. Jesse Jackson, a well-known civil rights leader, especially among older African Americans.

Jackson described black Americans as those most left behind socially and economically and that the progressive path laid out by Sanders offered the best chance for them to catch up.

At a rally in Grand Rapids, Michigan, Sanders introduced Jackson, 78, and said Barack Obama was able to become the first black U.S. president in 2008 because of the achievements of Jackson, who ran for the presidency twice in the 1980s.

“I stand with Bernie Sanders today because he stood with me. I stand with him because he’s never lost his taste for justice for the people,” Jackson told the large outdoor crowd.

Jackson, who has been a civil rights activist since the 1960s, won the 1988 Democratic primary in Michigan, the big prize in Tuesday’s contests where the stakes are high for Sanders after Biden’s Super Tuesday victories.

In addition to Michigan and Mississippi, Washington state, Missouri and Idaho are holding primary elections on Tuesday. North Dakota will hold caucuses.

‘YOU’RE THE REASON I’M BACK’

“If I am the comeback kid, there’s only one reason I’ve come back: the African-American community all around the country,” Biden said on Sunday at the largely black New Hope Baptist Church in Jackson, Mississippi.

Hundreds of parishioners listened as Pastor Jerry Young said God works “behind the scenes” to protect the faithful even when they are confronted by hopeless situations.

Earlier on Sunday, Sanders cited a different force at work, saying in television interviews that “the power of the establishment” forced Klobuchar and Buttigieg out of the race. Both endorsed Biden before the crucial Super Tuesday primaries.

Sanders was joined by U.S. Representative Alexandria Ocasio-Cortez, who has emerged as a leading voice of the Democratic Party’s left wing, at a rally in Ann Arbor, Michigan, on Sunday evening, where he focused on grassroots support for his agenda, and spent less time criticizing Biden’s record than at recent events.

CORONAVIRUS AND THE CAMPAIGN

With the coronavirus outbreak spreading to more U.S. communities, Sanders was asked on Sunday if he would continue to hold campaign rallies, which draw tens of thousands of people.

“We will not endanger the health of anybody in this country,” he told CNN. “We are watching this thing very, very carefully.”

Sanders, who has made universal healthcare a pillar of his campaign, tweeted that a vaccine for coronavirus, once developed, should be freely available. He is scheduled to hold a roundtable with public health professionals in Detroit on Monday.

Sanders, 78, and Biden, 77, are in higher-risk categories from the virus because of their age, as is Trump, who is 73.

Asked about the impact of the coronavirus on Trump’s campaign schedule, Trump campaign communications director Tim Murtaugh said: “The campaign is proceeding as normal.”

The president held a fundraising at his Mar-a-Lago resort in Florida on Sunday, and is scheduled to address the Republican Jewish Coalition next weekend.

Reporting by Trevor Hunnicutt in Mississippi, Doina Chiacu in Washington and Michael Martina in Detroit; Editing by Sonya Hepinstall and Peter Cooney