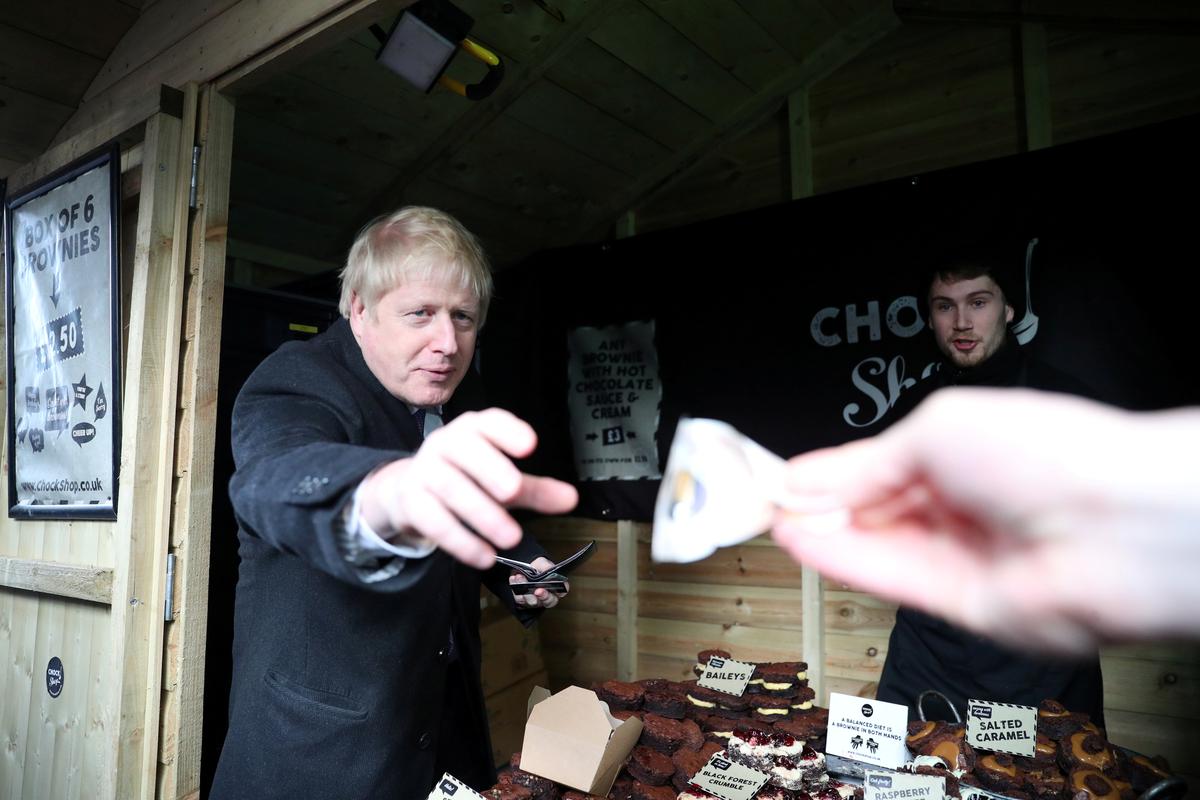 LONDON (Reuters) – Britain holds an election on Dec. 12, a political gamble by Prime Minister Boris Johnson who sees it as his best chance to break the deadlock in parliament over Brexit.

The parties are on the campaign trail, traveling the length and breadth of the United Kingdom to drum up support.

Following are some colorful snapshots from the election trail:

Johnson’s efforts to stimulate the local economy in the English city of Salisbury ran out of cash of Tuesday.

Touring local businesses during a campaign visit to a Christmas market, Johnson visited a local butcher and helped out behind the till at one stall, serving up sweets in front of a phalanx of cameras.

But the prime minister, whose Conservatives have cast themselves as the party of fiscal discipline during the election campaign, came unstuck when he tried to pay for a box of chocolate brownies.

Fumbling through his wallet, Johnson had to ask his team for a loan.

“I’m out of cash” he said, before someone eventually handed him a 10 pound ($12.83) note. “I lashed out on some sausages earlier on and it cleaned me out!”

Jeremy Corbyn, leader of the main opposition Labour Party, carries a little red book with him all over the country.

Not the famous collection of quotations from communist leader Mao Zedong – once brandished in parliament by Corbyn’s would-be finance minister – but a handwritten diary of knowledge he has picked up on the election trail.

“The wisdom that is there amongst people all over the country is something that absolutely inspires me, I go around with a notebook everywhere,” he said during a television interview, waving the book.

“I write notes about everything I do and everywhere I go, because you know what, everyone you meet knows something you don’t know.”

His interviewer on chat show ‘This Morning’ asked: “What are you going to write about us?”

He replied: “What a charming morning I am having, what wonderful Christmas decorations you’ve got.”

The army of grass roots volunteers who knock on doors, post leaflets and raise money for political parties are a crucial part of the machine that organizers must keep onside.

The Conservatives discovered the perils of failing to do on Tuesday when an emailed appeal for cash donations jarred with some volunteers.

“I’ve been reviewing our supporter list and it looks like you haven’t yet made a contribution to our campaign,” wrote Conservative Chairman Ben Elliot.

One of many disgruntled recipients wrote on Twitter: “A big thank you to the super rich Ben Elliot who sent all Tory members an email this morning to shame them if they can’t afford to contribute to the … election campaign.”

Elliot sent a second email four hours later, saying he had “in no way intended to detract from the invaluable support you have given our party.”