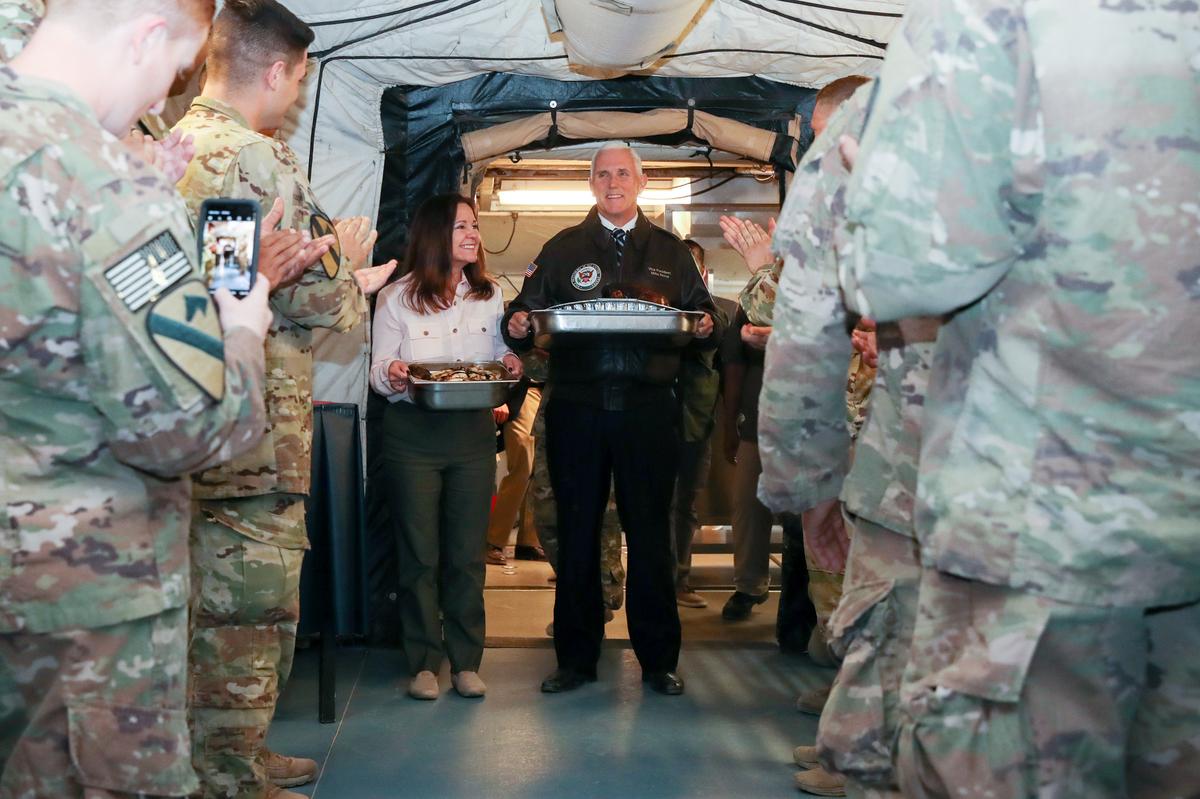 His trip included a visit with Nechirvan Barzani, the president of the Kurdistan region in Iraq, and also a phone call with Iraqi Prime Minister Adel Abdul Mahdi to discuss the unrest and protests over corruption that have rocked the country.

The visit also served to bolster U.S. troops ahead of next Thursday’s Thanksgiving holiday in the United States.

Pence made two stops during his short trip, which was previously unannounced for security reasons. Traveling on a military cargo plane, he landed first at Al Asad Air Base northwest of Baghdad and talked by phone with Abdul Mahdi.

“We spoke about the unrest that’s been taking place in recent weeks here in Iraq,” Pence told reporters. “He assured me that they were working to avoid violence or the kind of oppression we see taking place even as we speak in Iran.”

“He pledged to me that they would work to protect and respect peaceful protesters as … part of the democratic process here in Iraq.”

Hundreds have been killed since early October when mass protests began in Baghdad and southern Iraq. Protesters want to dislodge a political class they view as corrupt and beholden to foreign powers at the expense of Iraqis who suffer from poverty and poor healthcare.

U.S. Secretary of State Mike Pompeo said on Monday the United States was prepared to impose sanctions on any Iraqi officials found to be corrupt as well as those responsible for the deaths and wounding of peaceful protesters.

The trip gave the Trump administration a chance to show it is working on foreign policy even as impeachment hearings led by Democrats consume Washington.

Pence said he reiterated Trump’s commitment to an independent and sovereign Iraq. “We continue to be concerned about the malign influence of Iran across Iraq,” he said.

The vice president went on to Erbil in the semi-autonomous Kurdish region in Iraq, seeking to show U.S. appreciation for Kurdish sacrifices and affirm a message of U.S. support and partnership with Kurdish fighters.

Pence told Barzani at the beginning of their meeting at Erbil airport that he wanted on Trump’s behalf to “reiterate the strong bonds forged in the fires of war between the people of the United States and the Kurdish people across this region”.

Last month Turkey launched an offensive into northeastern Syria after Trump’s abrupt decision to withdraw all 1,000 U.S. troops there. Pence brokered a pause with Ankara to allow time for Kurdish fighters to withdraw.

That truce aimed to mitigate the crisis sparked by Trump’s announcement, which U.S. Republican and Democratic lawmakers criticized as a betrayal of Kurdish allies aligned with Washington in the fight against Islamic State.

Asked whether he had to smooth over any sense of betrayal from the Kurds, Pence said: “I don’t think there was any confusion now among the leadership here in the Kurdish region that President Trump’s commitment to our allies here in Iraq as well as to those in the Syrian defense forces, the Kurdish forces who fought along side us, is unchanging.”

At the Al Asad Air Base, which Trump visited in a similar surprise trip last year, Pence and his wife, Karen, served a traditional Thanksgiving meal of turkey, cranberry sauce and other fixings to some 700 U.S. troops.

Pence, on his first trip to Iraq as vice president, did not to go Baghdad to meet the prime minister personally because of safety concerns related to the protests, a U.S. official said.