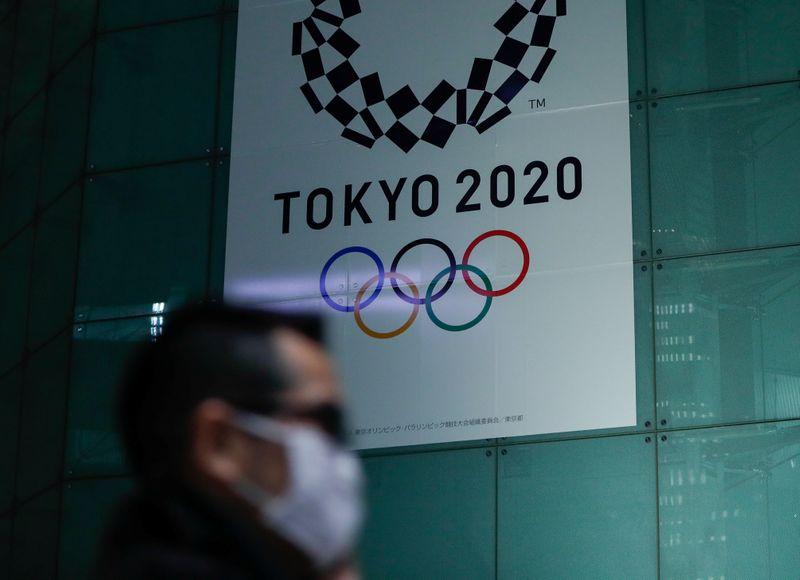 TOKYO (Reuters) – Any decision to delay the Olympics should be made before May, an organising committee board member told Japanese broadcaster TBS late on Wednesday, as doubts over the Summer Games may grow with the coronavirus now declared a pandemic.

A man wearing a protective face mask following an outbreak of the coronavirus disease (COVID-19) walks past a banner for the upcoming Tokyo 2020 Olympics in Tokyo, Japan, March 11, 2020. REUTERS/Issei Kato

Tokyo 2020 executive board member Haruyuki Takahashi’s comments came just hours after its chief, Yoshiro Mori, publicly chided him for remarks he first made to the Wall Street Journal that a delay of one or two years would be the most reasonable option if the coronavirus derailed the Games.

The Japanese and Tokyo metropolitan governments, local organisers and the International Olympic Committee (IOC) have all sought to quash persistent speculation that the Games could be cancelled or postponed.

Mori called Takahashi’s suggestion “outrageous”, while on Thursday Tokyo Governor Yuriko Koike said she believed cancellation was not an option, although she acknowledged that the pandemic label would affect future discussions.

The World Health Organization (WHO) described the coronavirus outbreak as a pandemic for the first time, prompting more countries to announce drastic measures.

The Tokyo 2020 Organising Committee said its stance had not changed following the declaration of a pandemic.

“We will continue to coordinate our response with the Government of Japan, the Tokyo Metropolitan Government and other stakeholders as we prepare for a safe and secure delivery of the Tokyo 2020 Games in July this year,” a representive said via email.

Speaking to TBS after Mori’s news conference, Takahashi said: “If you think about the athletes, May would seem too late” to make a decision on any delay, according to the broadcaster. “We need to think about taking the first step, before the IOC.”

He added that the organising committee would probably discuss postponement at its next meeting later this month, TBS reported.

Takahashi did not respond to a request for comment.

U.S. President Donald Trump suspended travel from Europe, except for the UK, for 30 days starting Friday, and hard-hit Italy tightened its lockdown.

One of the most common strategies to contain the coronavirus is to avoid large gatherings, and major sporting events around the world have been cancelled or held without spectators.

The U.S. National Basketball Association said it was suspending the season after a Utah Jazz player tested positive for the virus.

As of Wednesday, Japan had 620 cases and 15 deaths, excluding people on a cruise ship that was quarantined near Yokohama last month, according to the health ministry. Experts say the tally may be deceptively low due to the limited number of tests in Japan compared with many other countries.