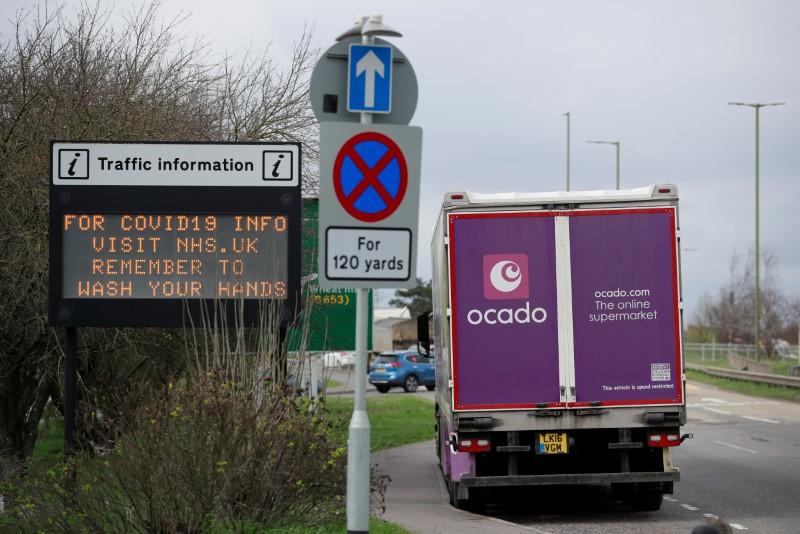 FILE PHOTO: General view of a message on a traffic information sign next to a Ocado lorry parked in a laybuy in Hatfield as the spread of the coronavirus disease (COVID-19) continues, in Hatfield, Britain, March 18, 2020. REUTERS/Andrew Couldridge

LONDON (Reuters) – The chairman of British online supermarket Ocado (OCDO.L) said there was no shortage of food in the country and “nobody will starve” during the coronavirus emergency.

Britain’s supermarket sector is facing unprecedented demand during the outbreak as consumers stock-up fearing a prolonged period of isolation, while schools, pubs, cafes and restaurants have been forced to close.

“The first thing is ‘don’t panic’. There isn’t going to be no food tomorrow,” Stuart Rose told BBC radio.

Rose, a former boss of Marks & Spencer, contracted the virus. Having been in self-isolation he ventured out to the supermarket for the first time in two weeks on Wednesday.

He said Britons should avoid going to supermarkets at peak hours and only buy what they need.

He called on the country to “make your meals work”.

“You can make a relatively small amount of food go a long way and I think we live in a very profligate society today – we buy too much, we eat too much and we have to learn new ways.”

Ocado has been operating at capacity during the crisis. It said on Tuesday it had around ten times more demand for its services than it did before the outbreak began.