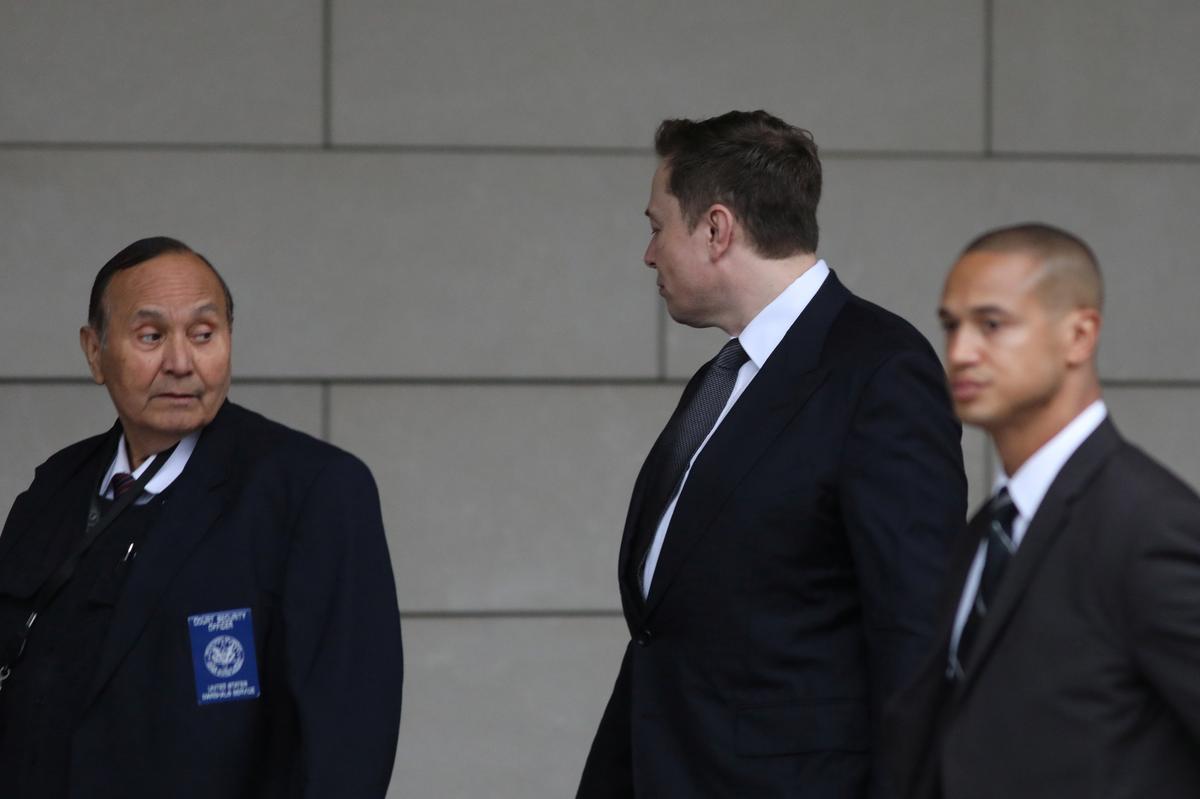 LOS ANGELES (Reuters) – The British cave explorer suing Elon Musk for calling him a “pedo guy” on Twitter testified on Thursday that his criticism of the Tesla Inc (TSLA.O) chief executive that led to the tweet was not a personal attack.

Elon Musk walks with his face turned away from cameras as he arrives at court for trial in a defamation case filed by British cave diver Vernon Unsworth who is suing the Tesla Inc chief executive for calling him a “pedo guy” in one of a series of tweets, as the case begins in Los Angeles, California, U.S., December 4, 2019. REUTERS/David McNew

In the defamation trial’s third day, Vernon Unsworth also refused to apologize for a July 13, 2018, CNN interview in which he said that Musk’s offer of a mini-submarine to help rescue a boys’ soccer team from a flooded Thailand cave was a “PR stunt” and that Musk could “stick his submarine where it hurts.”

“My insult was to the tube and not to Mr. Musk personally,” Unsworth said while being cross-examined by Bill Price, one of Musk’s lawyers. “I’m not sure how I need to apologize. It was my opinion at the time and I stand by that opinion.”

Jurors could have the case by Friday after testimony from other witnesses and closing arguments.

The lawsuit seeks unspecified damages over three Musk tweets on July 15, 2018, five days after Unsworth helped complete the rescue of 12 boys and their soccer coach from the cave.

Musk’s first tweet questioned Unsworth’s role in the rescue, while the second said, “Sorry pedo guy, you really did ask for it.” The third tweet, in response to a follower who asked Musk about the second tweet, said “Bet ya a signed dollar it’s true.”

Unsworth said the tweets harmed his reputation by branding him a pedophile and a liar, and said on Wednesday that they left him “humiliated, ashamed, dirtied.”

Musk’s lawyers have said Unsworth’s reputation was unsullied and that he even tried to profit from his role in the rescue, which Price said won him plaudits from the Thai and British governments.

Asked if there was talk of his being a pedophile at a 10 Downing Street event where he stood next to Theresa May, then Britain’s prime minister, Unsworth said: “Not that I recall.”

In his own testimony, Musk, 48, apologized to Unsworth and said he did not believe Unsworth was a pedophile.

He also dismissed the tweets as an “off the cuff” response to watching a replay of Unsworth’s CNN interview, at a time he felt overworked from running Tesla, which makes electric cars, and SpaceX, a rocket company that offered the mini-submarine.

Unsworth, 64, said he began caving as a hobby in 1971, and divides his time between Britain and Thailand, where he has a Thai girlfriend.

To win his lawsuit, Unsworth needs to show Musk was negligent in publishing a falsehood that clearly identified him and caused him harm. He does not need to show that Musk acted with “actual malice,” which is much tougher to prove.

Although the case does not involve Tesla, Musk’s Twitter habits have long been under scrutiny, with the company’s investors and regulators expressing concerns about his tweets.

With 29.9 million followers, Musk’s social media account is a major source of publicity for Palo Alto, California-based Tesla, which does not advertise.