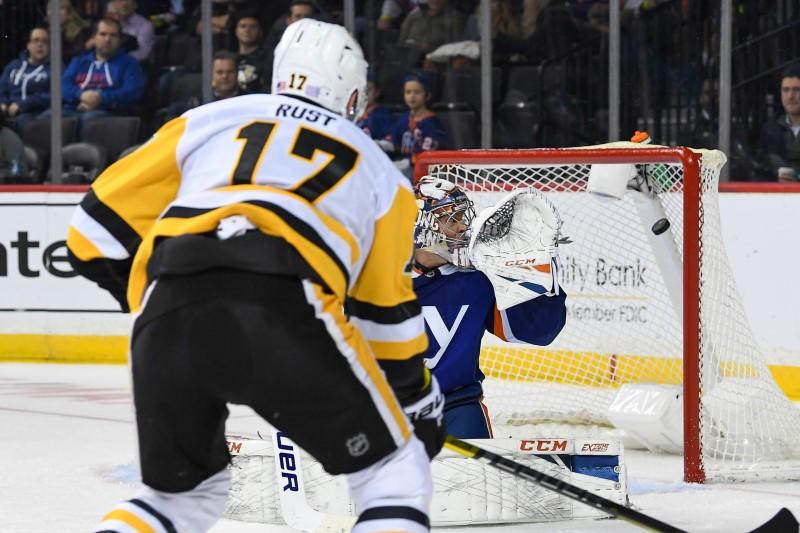 Bryan Rust scored his second goal of the game with 1:35 left in overtime Thursday night to cap a furious comeback by the visiting Pittsburgh Penguins, who scored four unanswered goals in the third period and overtime to snap the New York Islanders’ 10-game winning streak with a 4-3 win.

Rust stole the puck from Brock Nelson behind the net and tucked a wraparound shot past Islanders goalie Semyon Varlamov to cap the comeback by the Penguins, who snapped a two-game losing streak.

Jared McCann, Rust and Evgeni Malkin scored in the first nine minutes of the third period for the Penguins. Goalie Matt Murray overcame a slow start to make 20 saves.

Casey Cizikas, Cal Clutterbuck and Adam Pelech scored for the Islanders, whose winning streak was the second-longest in franchise history behind a 15-game run during the 1981-82 season. Varlamov made 35 saves.

The Capitals have won five straight games and have earned at least one point in 10 straight contests.

Washington also got two goals and one assist from Alex Ovechkin and one goal and two assists from John Carlson. Ovechkin, who has won the NHL goal-scoring title a league-record eight times, leads Washington with 13 goals.

John Tavares scored at 2:33 of overtime to complete Toronto’s comeback against visiting Vegas.

Tavares, who also had an assist in the game, took a pass from Mitch Marner and fired a shot from the right circle for his fourth goal of the season. Auston Matthews also scored for the Maple Leafs, tying the game in the third period with his 13th.

Max Pacioretty broke a scoreless tie 4:08 into the third for the Golden Knights, his fourth tally of the season. The teams combined for one goal on 11 power plays, Matthews’ tying score at 8:14 of the third.

Philippe Myers and James van Riemsdyk each added one goal for Philadelphia, which went 0-for-6 on the power play but nonetheless found a way to win. Flyers goaltender Carter Hart made 22 saves.

New York goalie Henrik Lundqvist made enough early stops, and his teammates finally generated offense in a victory over Carolina in Raleigh, N.C..

Lundqvist made 22 of his season-high 45 saves in the first period.

Artemi Panarin, Brendan Lemieux, Pavel Buchnevich and Adam Fox scored for New York, which took advantage of limited scoring opportunities. The Rangers have won two in a row and four of their last five games.

Anthony Duclair and Artem Anisimov also scored, and Anders Nilsson made 26 saves for the Senators, who improved to 2-5-1 when allowing the first goal.

Dustin Brown and Tyler Toffoli scored — the latter to tie it with eight seconds left in regulation — and Jack Campbell made 30 saves for the Kings, who are 1-5-1 in their past seven games.