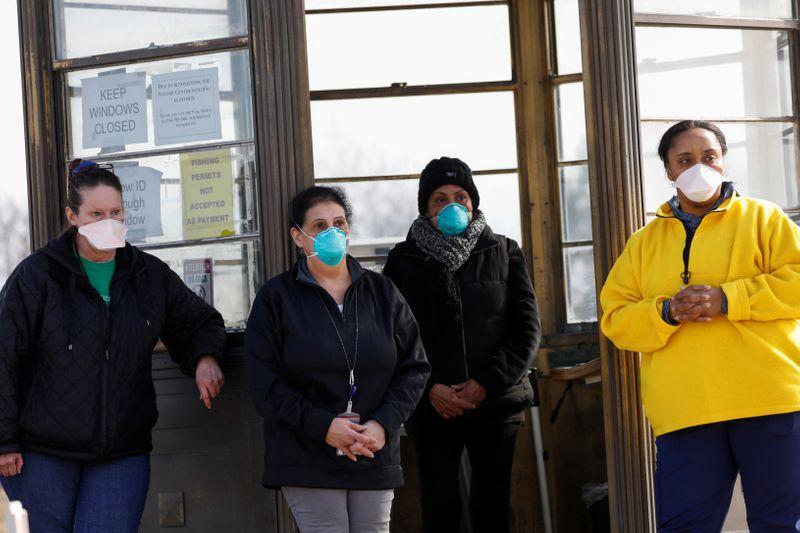 NEW YORK (Reuters) – New York City may soon compel most people to stay in their homes except in emergencies or when shopping for essentials, Mayor Bill de Blasio said on Tuesday, an order already imposed by San Francisco to slow the spread of the coronavirus.

Any decision to issue the “shelter in place” order is likely to be made in the next 48 hours, but even if imposed, it would likely still allow more than 8 million residents to make necessary trips out to buy food or medicine, the mayor said as the number of confirmed cases in the city rose to 814.

City officials acknowledged on Tuesday that they still do not have all the medical resources they have sought, and that they have been receiving protective equipment from the federal government that is past its expiry date.

The city has already asked New Yorkers to stay home when they can and has closed schools and limited bars and restaurants to take-out or delivery.

But if there is still not enough compliance, the city may soon enforce new rules restricting people to their homes unless they can prove they have a good reason to stay outside, Emergency Management Commissioner Deanne Criswell said in an interview.

A tally of mechanical ventilators found the city had many fewer of the life-saving machines than was thought, she said.

There are about 3,500 mechanical ventilators in the city’s public and private hospitals, the tally found, not the 5,000 city officials including the mayor had cited as recently as Tuesday afternoon.

Workers wait to assist people at the checkpoint of a testing facility for coronavirus disease (COVID-19) in Jones Beach on Long Island in New York, U.S., March 17, 2020. REUTERS/Andrew Kelly

In the most serious cases of COVID-19, the respiratory disease caused by the coronavirus, patients need the machines in order to breathe. Public health officials fear there may not be enough to go around, forcing doctors to make life-and-death decisions.

The city asked the federal government to send 2.2 million N95 respirator masks, which nurses and doctors place over their faces to prevent getting infected by the patients they treat, from the National Strategic Stockpile.

“We received 76,000,” Criswell said. “And they were all expired.” It was not clear when, or if, the government would send the other 2.1 million masks.

The U.S. Department of Health and Human Services, which runs the stockpile and has previously acknowledged some resources are expired, did not respond to a request for comment.

Federal health agency guidance allows expired masks to be used in certain circumstances, which Criswell said the city would follow.

“We’re facing an unprecedented disaster here and it’s going to continue to grow rapidly and get much worse before it gets better and we need to get the federal government to make sure we’re receiving the right resources to help our citizens,” she said.

The city has asked the U.S. Navy hospital ship Comfort, which can care for up to 1,000 patients, to dock in New York, a request echoed by lawmakers from the state on Tuesday, Criswell said.

U.S. Defense Secretary Mark Esper said on Tuesday he ordered the Navy to get ready to deploy Comfort and a second hospital ship, Mercy, if needed, but did not say to where.

“We’ve never been here before,” Mayor de Blasio said of the possible “shelter in place” order. “I have never heard of anything like this in the history of New York City. We’re going to have to create it from scratch, if we do it.”