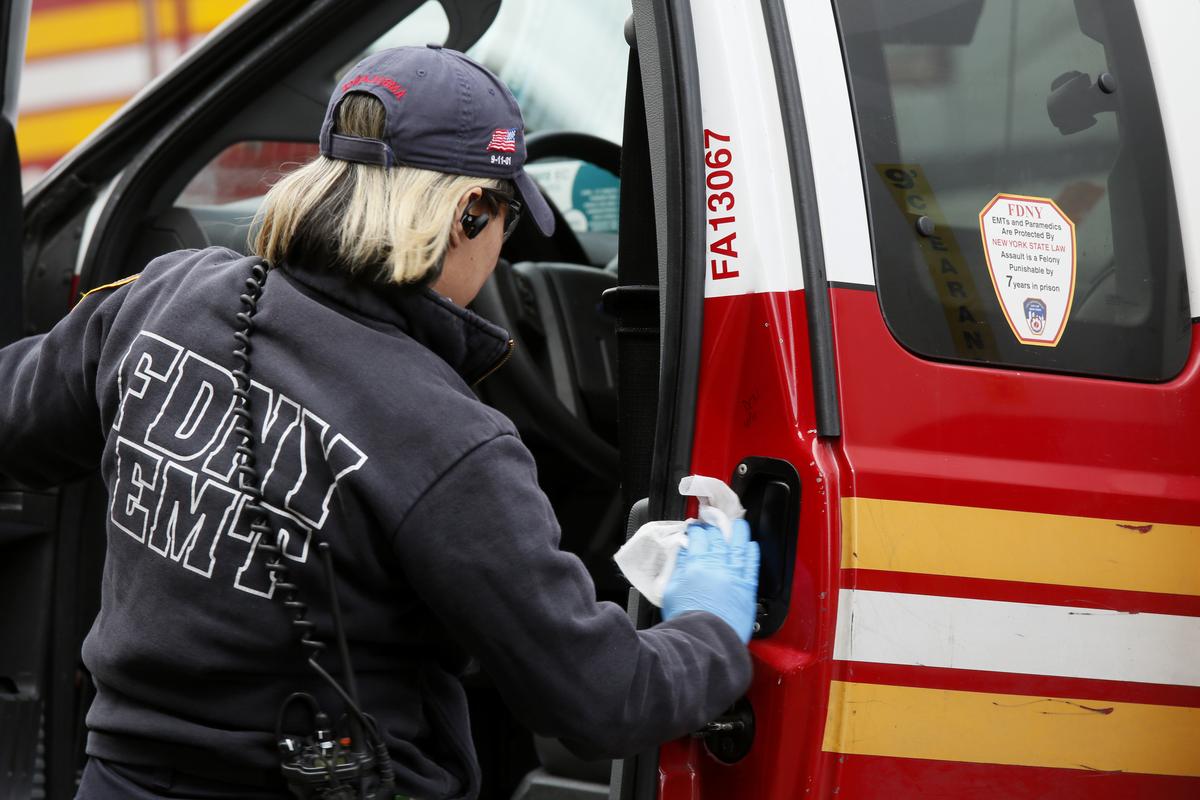 NEW YORK (Reuters) – New York City hospitals and morgues bent under the strain of the coronavirus pandemic on Thursday, struggling to treat or bury casualties, as the state’s governor offered a grim prediction that the rest of the country would soon face the same misery.

Global coronavirus cases surpassed 1 million on Thursday with more than 52,000 deaths, according to a Reuters tally based on country by country data.

Nearly 1,400 people have been killed by the virus in New York City, while an estimated 90% of Americans are under orders to remain at home, in many cases unable to work and fearing infection when they leave to buy food or other necessities.

“In many ways, New York state is a microcosm of the United States and that’s why I think it is going to be illustrative to the rest of the nation as to what is going to happen,” New York Governor Andrew Cuomo said.

The U.S. death toll stood at over 5,800 on Thursday, up more than 900 from the day before, with a total of 240,000 cases reported by states and counties, according to a Reuters tally.

The U.S. Navy relieved the commander of the aircraft carrier Theodore Roosevelt, who wrote a scathing letter asking for help controlling a coronavirus outbreak onboard, U.S. officials told Reuters on Thursday.

White House medical experts have forecast between 100,000 to 240,000 people could be killed even if Americans follow strict lock-down orders.

The U.S. government reported that a record 6.6 million workers, sent home by their employers as businesses closed, had filed for jobless benefits last week, double the previous all-time high set a week earlier.

“It takes your breath away,” Justin Hoogendoorn, head of fixed income strategy and analytics at Piper Sandler in Chicago, said of the unemployment numbers. “Obviously the immediate reaction to something like that is going to be fear.”

The Walt Disney Company said on Thursday it would furlough all non-essential employees beginning on April 19.

BURNING BODIES INTO THE NIGHT

New York City funeral homes and cemetery directors described a surge in demand not seen in decades as cases surpassed 50,000 in the city.

Crematories extended their hours and burned bodies into the night, with corpses piling up so quickly that city officials were looking elsewhere in the state for temporary interment sites.

“We’ve been preparing for a worst-case scenario, which is in a lot of ways starting to materialize,” said Mike Lanotte, director of the New York State Funeral Directors Association.

At Brooklyn’s Wyckoff Heights Medical Center, staff were seen disposing of their gowns and caps and other protective wear in a sidewalk trash can on Thursday after wheeling bodies out of the hospital and loading them into a refrigerated truck.

Reuters was unable to confirm whether the bodies were those of coronavirus victims and hospital administrators could not be reached for comment. Operator Beatrice Pereira said, “They said that there’s no one available right now, that everyone here is busy saving lives.”

An emergency stockpile of medical equipment maintained by the U.S. government has nearly run out of protective gear for doctors and nurses, as governors and healthcare providers across the country clamor for the gear and medical equipment such as ventilators, which help COVID-19 patients breathe.

New York City Mayor Bill de Blasio urged all residents to cover their faces when outdoors, recommending scarves while N95 masks and other professional gear was in short supply.

PENCE SAYS SUPPLIES ON THE WAY

Vice President Mike Pence, leading the White House response to the outbreak, told Fox News Radio the administration’s models suggest the virus will peak in the greater New York metropolitan area in the next seven to 14 days.

​ Pence said the Trump administration had distributed about 4,400 ventilators to New York over the last week and would be sending more on Thursday. He said 3M would be importing 10 million N95 masks from China.

Tesla co-founder Elon Musk, who previously provided more than 1,000 ventilators to California, said on Twitter that he would start delivery of the “intratracheal Medtronic units” in New York City on Thursday evening.

“The system that the administration has in place is horrible,” Schumer told MSNBC.

Trump tweeted that New York has received more federal aid than any other state and said the man he describes as “Cryin’ Chuck Schumer” and local officials should stop complaining, adding they should have stocked up long ago.

California Governor Gavin Newsom said at a daily news briefing that 203 people had died in the state, with more than 1,900 patients hospitalized. He said the numbers of cases were not spiraling at the same pace as New York, but cautioned that a spike could still be coming.

After 27 days at sea in which four passengers aboard one of the ships died, they can dock in Fort Lauderdale.