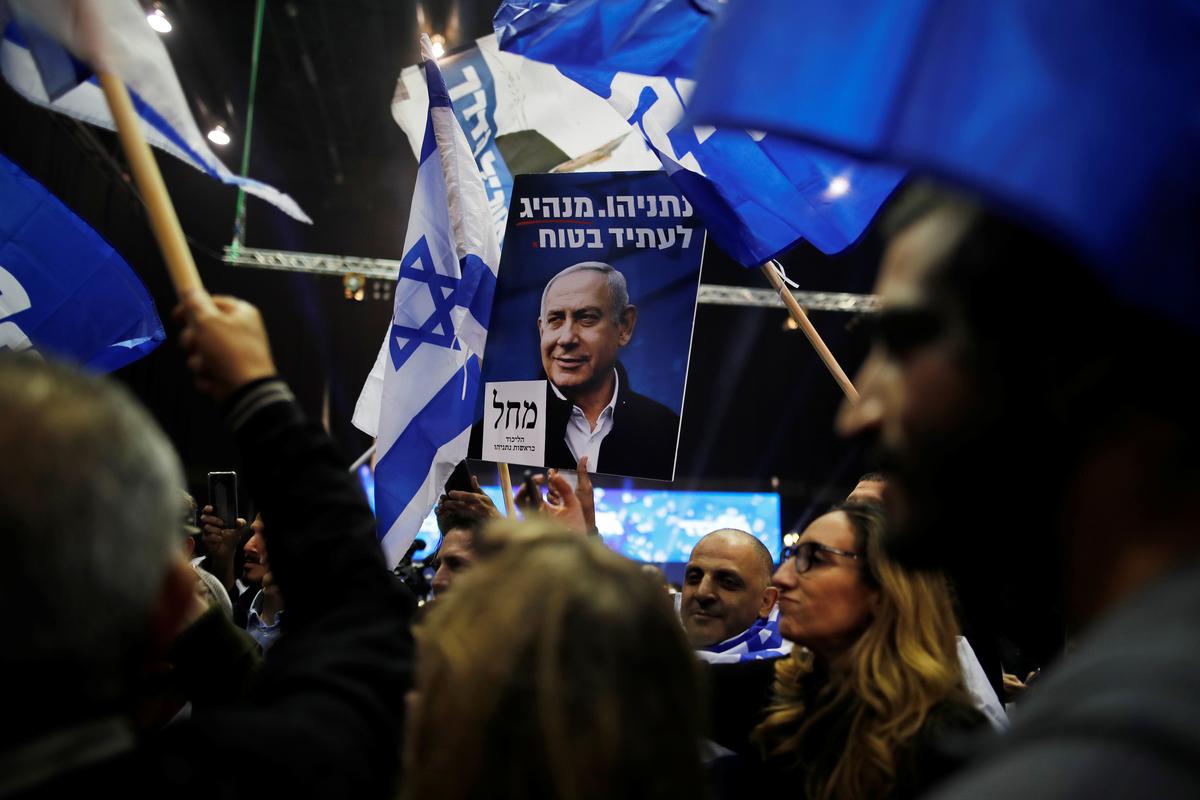 JERUSALEM (Reuters) – Prime Minister Benjamin Netanyahu planned to declare victory in Israel’s election on Monday, a spokesman for his party said, after television exit polls showed him just a seat short of a governing majority in parliament.

A win for Netanyahu, after inconclusive ballots in April and September, would be testimony to the political durability of Israel’s longest-serving leader, who fought the latest campaign under the shadow of a looming corruption trial.

It would also pave the way for Netanyahu to make good on his pledge to annex, after the election, Jewish settlements in the occupied West Bank, and the region’s Jordan Valley, under a peace plan presented by U.S. President Donald Trump.

Palestinians have rejected the proposal, saying it was killing their dream of establishing a viable state in the West Bank and Gaza Strip, territory Israel captured in the 1967 Middle East war.

A spokesman for Netanyahu’s right-wing Likud said the prime minister would deliver a victory speech at the party’s election headquarters in Tel Aviv at 2145 GMT.

“A giant victory for Israel,” Netanyahu, 70, tweeted after the projections were released.

During the campaign, right-wing and religious parties had pledged to join a Likud-led coalition government. But if the 60-seat projection held true, after actual results on Tuesday, Netanyahu would still have to enlist other allies in coalition negotiations.

A Likud spokesman said that after the exit polls were released Netanyahu telephoned the leaders of parties that have already partnered with Likud and “they agreed to form a strong, national government in Israel soon.”

There was no immediate reaction from Netanyahu’s main challenger, former armed forces chief Benny Gantz of the centrist Blue and White party.

The exit polls showed Likud taking between 36 and 37 parliamentary seats to 32 or 33 for Blue and White – a gap that would make it far harder for Gantz to find a path to putting together a governing coalition.

Netanyahu campaigned vigorously on his strongman “security-first” platform that Israeli voters have become familiar with over decades, and his loyal base has stood firmly behind him throughout, seemingly unfazed by his imminent trial.

“While we need to wait for the final results, there is no doubt that Prime Minister Netanyahu has won a significant political mandate from the Israeli people,” said Yohanan Plesner, president of the Israel Democracy Institute.

“Israelis voiced their support for the man they perceive to have brought them security and prosperity,” he said.

Netanyahu’s re-election bid has been complicated since the last election by his indictment on charges of bribery, breach of trust and fraud over allegations he granted state favors worth millions of dollars to Israeli media barons in return for favorable press coverage and that he wrongfully received gifts.

The first trial of a sitting prime minister in Israel is due to begin on March 17. Netanyahu denies any wrongdoing.

During the campaign, Gantz termed Netanyahu “the defendant” and has accused him of seeking to retain power to promote legislation that would bar authorities from putting a serving prime minister on trial.

Netanyahu has portrayed Gantz, 60, as a “coward”, saying he would need Arab politicians’ support in parliament to form a government and that they would tie his hands.

In the final days of the campaign, opinion polls had forecast further deadlock, but turnout was high despite concerns about the spread of the new coronavirus.

Voters under home-quarantine, such as those who have recently traveled back to Israel from coronavirus hot spots, voted at special polling stations wearing face masks and gloves.