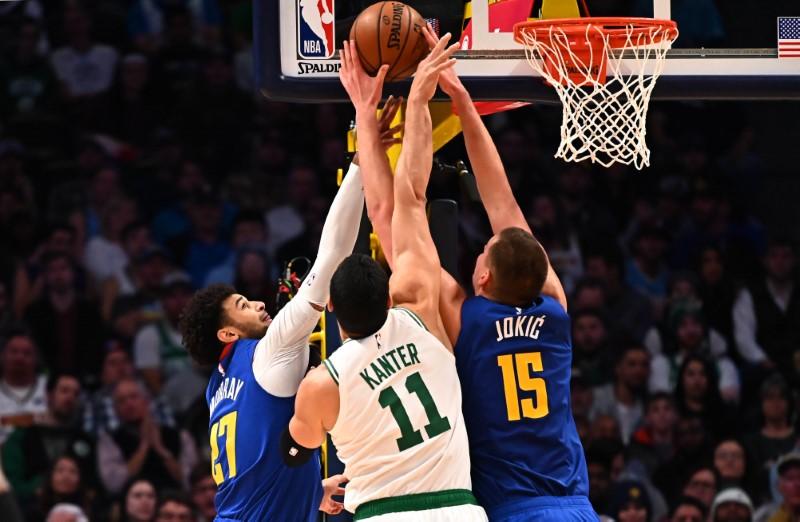 Nikola Jokic scored 18 points, collected a season-best 16 rebounds and also had 10 assists and three steals during his third triple-double of the season to lead the Denver Nuggets to a 106-102 victory over the visiting Boston Celtics on Friday night.

The game was marred by a scary incident that led to Boston guard Kemba Walker being taken off the court on a stretcher with 3:13 left in the second quarter. The Celtics later announced that Walker was diagnosed with “concussion-like symptoms” and was sent to a local hospital for further evaluation.

Denver’s Jamal Murray recorded a team-high 22 points to go with six rebounds and five assists as the Nuggets won their fourth straight game and eighth in the past nine. Will Barton added 15 points, and Paul Millsap contributed 14 points and 10 rebounds.

Jaylen Brown had 22 points and 10 rebounds, and Jayson Tatum added 16 points for the Celtics, who have lost three of their past four games following a 10-game winning streak.

It was the Lakers’ second victory over the Thunder in a span of three days, as they earned a tightly contested 112-107 decision Tuesday at Los Angeles.

Kentavious Caldwell-Pope scored 17 points, and Danny Green added 14 as the Lakers won their sixth consecutive game and earned a 13th victory in their past 14 contests.

Al Horford scored 18 points and Furkan Korkmaz had 17 to carry the Sixers to their third win in a row. Ben Simmons completed a triple-double with 10 points, 10 rebounds and 13 assists for Philadelphia, which improved to 6-0 at home.

DeMar DeRozan paced the Spurs with 29 points while Rudy Gay added 22. The reeling Spurs fell to 5-11 overall and suffered their eighth consecutive loss, the longest skid since head coach Gregg Popovich took over in 1996-97.

In winning a second straight game, the Jazz led by as many as 21 points early in the fourth quarter before the Warriors made an improbable late run that defied a fourth game in six nights on the road.

Donovan Mitchell finished with 30 points, Conley 27 and Bogdanovic 17 for the Jazz. With Draymond Green missing his second straight game with a sore heel, Golden State suited up just eight players, and seven of them scored in double figures.

Bradley Beal had 30 points and 12 assists, and Washington rallied to defeat visiting Charlotte.

The Wizards overcame a 13-point fourth-quarter deficit to win consecutive games for the first time this season.

Blake Griffin scored 24 points and host Detroit had its highest scoring first half in 36 years while snapping a five-game losing streak as it pummeled Atlanta.

Andre Drummond had 23 points and 15 rebounds in 27 minutes, and Bruce Brown supplied 14 points, seven assists and three steals while limiting Hawks star Trae Young to nine points on 3-for-12 shooting. Young poured in 38 points against the Pistons in the Hawks’ season opener, a 117-100 Atlanta victory.

Markieff Morris had 13 points, Langston Galloway tossed in 12 and Derrick Rose and Christian Wood added 11 apiece for Detroit. The Pistons shot 59.8 percent overall and made half of their 34 3-point tries.

Dinwiddie started in place of Irving for the fourth straight game. Irving has been out due to right shoulder impingement and the Nets did not provide a further update on his status.

Without Irving’s 28.5 points per game, Dinwiddie set a career high by getting at least 20 points for the fourth straight game. He shot 8 of 15 overall, hit all seven of his free-throw attempts and handed out seven assists in helping the Nets win for the third time in four games.

Luka Doncic collected 30 points and 14 assists as Dallas recorded a sweep of its four-game homestand with a convincing victory over Cleveland.

Doncic, who shot 11 of 18 from the floor before sitting out the fourth quarter, became the eighth Mavericks player to score 30-plus points in three straight games. The last to accomplish the feat was Dirk Nowitzki (2010), who received a standing ovation after being shown on the Jumbotron during the first quarter.

Nowitzki saw quite a performance from the home team, which surpassed 140 points for the second consecutive game. Justin Jackson had 19 points and Kristaps Porzingis scored 17 and added four blocks while playing in his 200th career game.

Jimmy Butler scored a team-high 27 points on 7-for-10 shooting to lead Miami to a win in Chicago.

Zach LaVine led the Bulls with 15 points on 6-for-14 shooting. Coby White and Thaddeus Young scored 12 points apiece to lead a spirited effort from the reserve unit for Chicago, which has lost four of its past five.

Prepare to study in Canada
Study permit: Who can apply
Canada Doubles Number Of Out-Of-Status Toronto Construction Workers Eligible For Permanent Residence
Bus Drivers Can Now Immigrate To Canada Through Express Entry
Alberta To Give PNP Preference To Immigrants With Family In Province
Express Entry Now Allows Estheticians To Immigrate To Canada
Here Are The Top 15 Jobs In Canada For 2023