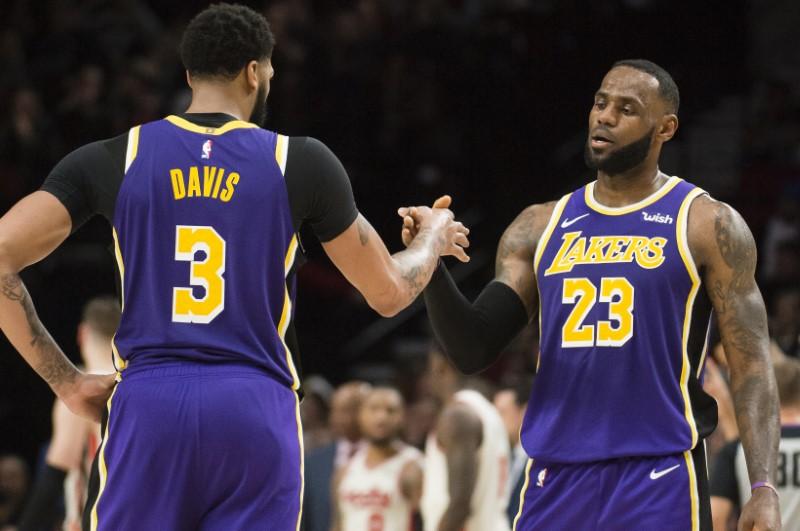 LeBron James made four 3-pointers while recording 31 points, eight assists and seven rebounds as the Lakers improved their record to 20-3, tied with the Milwaukee Bucks for best in the NBA. Kyle Kuzma scored 15 off the bench, and JaVale McGee added 13 points on 6-of-7 shooting as Los Angeles completed a 3-0 road trip that began with games against the Denver Nuggets and Utah Jazz.

Portland’s Rodney Hood sustained a torn left Achilles tendon during the first quarter. Hood collected a rebound and fell to the floor after landing, then immediately grabbed for the lower portion of his left leg with 3:27 left in the period. He was scoreless in the contest.

Giannis Antetokounmpo scored 27 points and grabbed 11 rebounds on his 25th birthday as Milwaukee extended its NBA-best winning streak to 14 games with a rout of visiting Los Angeles.

Khris Middleton scored 17 points while Pat Connaughton and Ersan Ilyasova added 13 each as the Bucks improved to 10-1 at home.

Kawhi Leonard scored 17 points for the Clippers in his first game at Milwaukee since the Toronto Raptors earned a victory there in Game 5 of last season’s Eastern Conference finals to take a 3-2 series lead. Leonard’s Raptors went on to win the series in six games on the way to the NBA title.

Jimmy Butler had his second triple-double in the past three games and the sixth of his career, posting 28 points, 11 rebounds and 11 assists and leading host Miami over Washington as the Heat set a franchise record by starting the season 9-0 at home.

Dennis Schroder forced overtime with a last-second basket, and Chris Paul scored 30 points to lead Oklahoma City win over visiting Minnesota. Shai Gilgeous-Alexander scored a career-high 29, including 11 of the Thunder’s 17 points in the extra period.

Oklahoma City had five players finish with 20-plus points for the first time in franchise history. Schroder scored 25 off the bench while Steven Adams (22 points, 11 rebounds) and Danilo Gallinari (21) also contributed.

Luke Kennard added 15 points and Rose scored 10 of his 14 points in the third quarter for the Pistons. T.J. Warren scored 26 points and Malcolm Brogdon added 21 points in a losing cause for the Pacers.

The Pistons wrapped the game up with a defensive stop and subsequent breakaway layup by Langston Galloway with 9.3 seconds remaining.

Joe Harris pumped in 22 points, and Brooklyn produced a couple of significant second-half scoring surges to win at Charlotte.

Taurean Prince tacked on 16 points, while centers Deandre Jordan and Jarrett Allen posted 16 and 14 points, respectively, for the Nets. David Nwaba and Spencer Dinwiddie provided 13 points apiece for Brooklyn, which has won five of its past six road games.

Dejounte Murray’s jumper with 29.6 seconds to play proved to be the difference as host San Antonio outlasted Sacramento, winning back-to-back games for the first time since the opening week of the season.

The Spurs were down by nine points with 1:50 to play in regulation but made a final push. Aldridge scored 19 points and grabbed 13 rebounds for the Spurs. DeMar DeRozan, who had three 3-pointers in the game after having only four all season, added 15 points for San Antonio.

Terrence Ross made four 3-pointers to highlight his 21-point performance as visiting Orlando recorded a victory over Cleveland.

Evan Fournier scored 18 points and Aaron Gordon added 14 for the Magic, who extended their winning streak to a season-high four games by defeating the Cavaliers for the third time this season.

Collin Sexton finished with 19 points and Cedi Osman added 14 for the reeling Cavaliers, who have lost five in a row and 11 of their past 12 games.

Kemba Walker had 19 points, and Marcus Smart chipped in nine in his return from an abdomen injury as the Celtics won for the fifth time in their last six games. Boston improved to 9-0 at home.

Nikola Jokic had a season-high 30 points and 10 rebounds for the Nuggets, who lost for the third time in their last four games. Denver was playing the second night of a back-to-back, having beaten the New York Knicks by a 37-point margin Thursday.

Glenn Robinson III scored a team-high 20 points, including a go-ahead basket with 1:03 left in the fourth quarter, and Golden State held on for a win at Chicago.

Alec Burks scored 14 points on 6-for-10 shooting off the bench for Golden State, which won only its fifth game of the season but improved to 2-0 against Chicago. Eric Paschall finished with 13 points and Willie Cauley-Stein added 10.

Zach LaVine scored 22 points to lead the Bulls, who had won their previous two games in a row. Lauri Markkanen tallied 20 points, and rookie Coby White finished with 14 points in 19 minutes off the bench.

Prepare to study in Canada
Study permit: Who can apply
Canadian Passport’s Power Gains One Point On Index
US Plans to Lift Covid Emergency Declarations May 2023
Manitoba Invests Another $4m In Immigrant Settlement Services
Teacher’s Assistants Can Now Immigrate To Canada Through Express Entry
Malaysians Can Now Work In Canada Through Trans-Pacific Trade Partnership