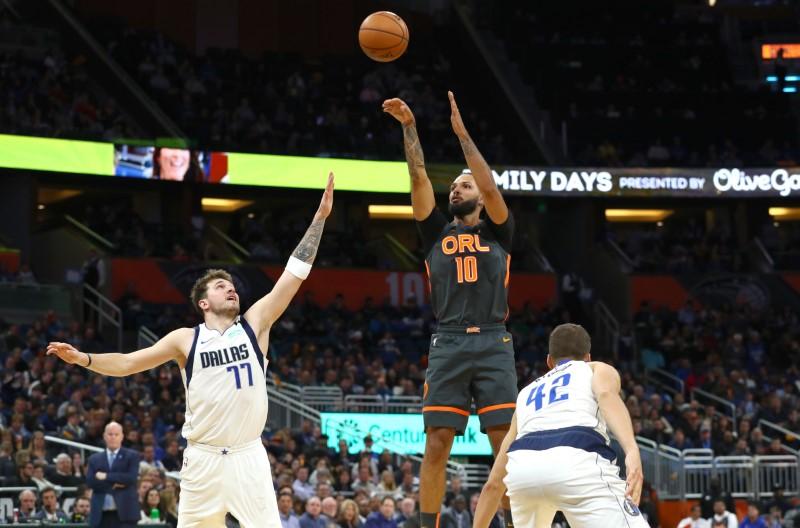 Luka Doncic scored 33 points, grabbed 10 rebounds and handed out eight assists, Maxi Kleber scored a career-high 26 points off the bench, and the Dallas Mavericks held off the host Orlando Magic 122-106 on Friday.

Kleber did much of his damage in the fourth quarter, hitting 3 of 4 3-point attempts and scoring 12 points in the frame. His effort ignited a critical final 12 minutes for the Mavericks, who were dominant in the opening and closing periods.

Evan Fournier scored a team 28 points including five 3-pointers, for the Magic, and Nikola Vucevic added 27 points, 12 rebounds and four steals. Terrence Ross finished with 19 points, although he made only 5 of 16 from the field.

Gordon Hayward scored a game-high 29 points and Boston played strong defense down the stretch to hold off Minnesota in Minneapolis.

Jayson Tatum scored 28 points and Jaylen Brown and Daniel Theis chipped in with 25 apiece as the Celtics came out of the All-Star break to win their fourth road game in the last five. Boston has won 12 of 14 overall.

Malik Beasley had 27 points to pace the Timberwolves, who were without star center Karl-Anthony Towns, out with a sprained left wrist. Minnesota lost for the 16th time in its last 17 games.

Anthony Davis sustained a bruised calf in the first quarter but remained in to contribute 28 points, 13 rebounds and seven of the Lakers’ 14 blocked shots. Avery Bradley added 14 points and three steals as the Lakers won their fourth in a row.

Josh Jackson scored 20 points on 9-of-12 shooting to lead the Grizzlies, who lost for the second time in as many nights. Rookie Ja Morant had 17 points, and Brandon Clarke and Gorgui Dieng each amassed 14 points and 10 rebounds.

Brandon Ingram added 16 points and six assists for the Pelicans, who have won seven of their past 10 games. Lonzo Ball had 15 points and seven assists, Josh Hart added 13 points and 13 rebounds and Nicolo Melli also scored 13 for New Orleans.

Dejounte Murray poured in 23 points to lead six teammates in double-figure scoring as San Antonio defeated Utah in Salt Lake City in the first game for both teams after the All-Star break.

DeMar DeRozan hit for 18 points for San Antonio while LaMarcus Aldridge and Patty Mills each added 15, Derrick White had 14 and Bryn Forbes scored 13. The Spurs have won two straight games after losing the first five on their annual Rodeo Road Trip. The trip ends Sunday in Oklahoma City.

Emmanuel Mudiay and Rudy Gobert led the Jazz with 18 points each; Gobert also grabbed 14 rebounds for his 43rd double-double this season. Jordan Clarkson and Bojan Bogdanovic added 15 points for Utah, with Donovan Mitchell scoring 12 points. The Jazz had a four-game win streak snapped.

Cedi Osman had 16 points and 10 rebounds and Darius Garland added 15 points for Cleveland, which has won two in a row after losing 13 of its previous 14 games.

Bradley Beal scored 26 points on 9-of-28 shooting for Washington, which had won five of its previous seven as it vies for an Eastern Conference playoff spot. Beal has recorded 13 straight games with at least 25 points.

Bobby Portis scored 19 points to lead the Knicks, who lost their third straight game and could not rally from a 22-point deficit. Rookie RJ Barrett added 17 points and Frank Ntilikina contributed 14 but leading scorer Julius Randle was held to seven points as New York shot 43.2 percent.

Chris Paul made four 3-pointers as part of a 29-point outing to lead Oklahoma City to a victory over visiting Denver.

Steven Adams recorded 19 points, 17 rebounds and matched his season best of four steals as Oklahoma City won for the 11th time in the past 14 games. Danilo Gallinari added 15 points, and Shai Gilgeous-Alexander contributed 11 points, nine rebounds and nine assists as the Thunder halted a seven-game losing streak when facing the Nuggets.

Pascal Siakam scored 37 points — 25 in the first half — and grabbed 12 rebounds as Toronto defeated visiting Phoenix. The Raptors have won 16 of their past 17 games.

Devin Booker scored 21 points and had eight assists for the Suns, who have lost seven of nine. Deandre Ayton contributed 17 points and 10 rebounds, Ricky Rubio had 13 points and nine assists, and Kelly Oubre Jr. scored 11 points.