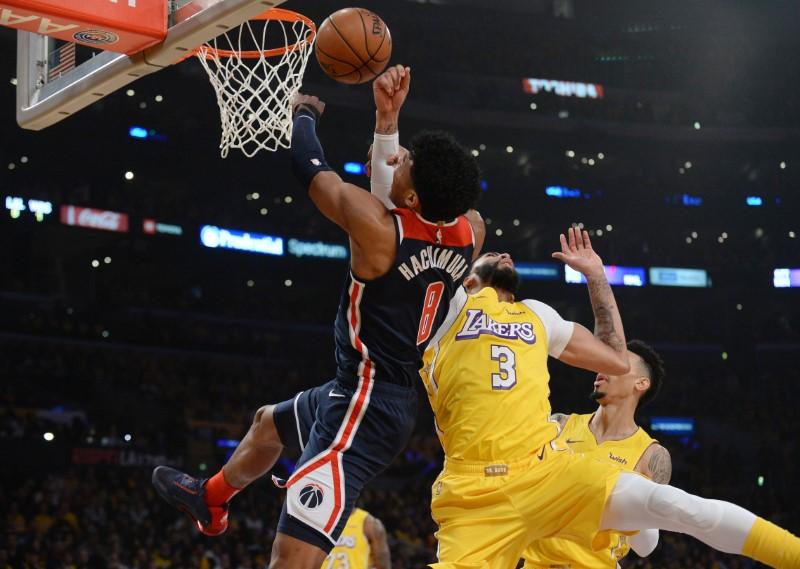 Anthony Davis had 26 points, 13 rebounds and three blocks in less than three quarters, leading the Los Angeles Lakers to their 10th consecutive win by crushing the visiting Washington Wizards 125-103 on Friday night.

LeBron James, who also rested in the fourth quarter, finished with 23 points and 11 assists for the Lakers, who captured their 17th win in 18 games. Their lone loss during the stretch was at home to the Toronto Raptors on Nov. 10.

Quinn Cook scored 17 points, while JaVale McGee added 15 and Rajon Rondo chipped in with 13. Danny Green added 11 for Los Angeles, which is 9-1 at home.

Wizards guard Bradley Beal, who entered the contest ranked fourth in the league in scoring at 28.9 per game, scored 18 points and recorded nine assists. Rui Hachimura had 16 points and eight rebounds for the Wizards, who have dropped three of four. Ish Smith and Jordan McRae each scored 13 off the bench for Washington.

Giannis Antetokounmpo capped a 33-point performance with four key hoops down the stretch as visiting Milwaukee held off Cleveland for its 10th straight win.

Antetokounmpo completed a double-double with a team-high 12 rebounds for the Bucks, who beat the Cavaliers for the second time this season. George Hill chipped in with 18 points, while Middleton had 12, DiVincenzo 11, and Eric Bledsoe and Ersan Ilyasova 10 apiece.

Rookie Darius Garland went for 21 points, his second-most of the season, to pace the Cavaliers, who lost their third straight. Fifteen of his points came on 5-for-7 shooting on 3-pointers, helping Cleveland outscore Milwaukee 51-36 from beyond the arc.

Seth Curry capped an 11-point Dallas run midway through the fourth quarter as the visiting Mavericks rallied for a victory in Phoenix.

Luka Doncic matched his career-high with 42 points, including four free throws during the late burst that turned a 97-96 deficit with 8:29 remaining into a 107-97 lead with just 5:01 to go. The Suns never seriously threatened after that.

Doncic’s 42 points, which equaled his total against San Antonio Nov. 18, included 15-for-18 shooting at the free-throw line, helped the Mavericks gain a 33-18 advantage over the host Suns. Dallas shot 38 foul shots, Phoenix 25. Doncic also found time for 11 assists and missed his eighth triple-double of the season by one rebound.

In a game that saw neither team shoot better than 46 percent, Portland eked out a win over visiting Chicago thanks to a historic effort from Hassan Whiteside.

Portland also had another balanced scoring effort in its third consecutive win, led by 28 points from Damian Lillard, 23 from Carmelo Anthony, 20 from CJ McCollum and 19 from Rodney Hood.

But defense was a key for Portland in the victory, including a franchise-record 10 blocks for Whiteside to go along with eight points and 15 rebounds.

Jayson Tatum scored 26 to lead the Celtics, who are 2-4 since their 10-game winning streak.

Bojan Bogdanovic scored 26 of his season-high-tying 33 points in the second half and finished with eight rebounds to lead Utah past host Memphis.

Donovan Mitchell added 20 points for the Jazz, who improved to 1-2 on a five-game road trip. But Mike Conley struggled for the second time in Memphis this season, hitting 3 of 13 shots for eight points Friday to make him 8-for-32 in the two games in his former home arena.

Jonas Valanciunas had 22 points and 17 rebounds for Memphis, which lost its sixth straight game. Brandon Clarke added 13 points while Dillon Brooks and Ja Morant scored 11 apiece for the Grizzlies, who committed 12 turnovers.

T.J. Warren’s corner 3-pointer with 1:13 remaining in overtime gave Indiana the lead for good, and the Pacers survived a career-high-tying 49 points from Trae Young to beat Atlanta in Indianapolis.

With 16 points, Warren was one of five Pacers to score in double figures. Jeremy Lamb led the way with 20 points, Myles Turner and Domantas Sabonis each added 17 points, and Malcolm Brogdon scored 16 points.

Young’s season-high scoring performance included a high-arching finger roll with 11.5 seconds remaining in regulation that ultimately forced overtime. Young, who hit 16 of 28 from the floor, 8 of 15 from 3-point range and 9 of 9 at the foul line, has scored at least 29 points in each of his past four games.

The Spurs, who had lost 10 of their previous 11 games, played some of their best basketball of the season in breaking out from a tie game at halftime to an 87-71 lead a minute and a half into the fourth quarter.

DeMar DeRozan added 15 points and Patty Mills hit for 13, Bryn Forbes scored 12 and Trey Lyles 10 for San Antonio. Former Spurs star Kawhi Leonard, in his second game back in San Antonio after being traded to Toronto prior to last season and signing with the Clippers in the most recent offseason, led all scorers with 19 points.

Norman Powell scored 19 of his career-best 33 points in the third quarter and Toronto overcame an 11-point deficit in the second quarter to defeat host Orlando.

Miami improved to 8-0 at home this season, matching the best home start in franchise history, and the Heat is also 7-0 against teams with losing records.

Goran Dragic (team-high 20 points), Herro (19) and Kelly Olynyk (15) combined for 54 points off the Heat bench. The injury-plagued Warriors, who have the worst record in the NBA, were led by Jordan Poole (20 points), Eric Paschall (17 points) and Alec Burks (16 points).

Joel Embiid totaled 27 points and 17 rebounds as visiting Philadelphia rallied again from a double-digit deficit to beat New York for the 10th straight time on a night in which it was without two starters, Al Horford (rest) and Josh Richardson (hamstring).

Reserve James Ennis III added 18 of his 20 in the second half, when the 76ers shot 52.9 percent. Tobias Harris contributed 19 points while Ben Simmons chipped in 15 points and eight assists. Philadelphia shot 43.1 percent from the floor, hit 32 of 40 free throws and won for the sixth time in seven games overall.

Julius Randle led the Knicks with 22 points, and Marcus Morris added 20, but New York missed 14 of 33 free-throw attempts and lost its fifth straight game. Rookie RJ Barrett contributed 18 points for the Knicks, who held a 16-point lead late in the first half.

The Hornets downed the Pistons for the third time this season and the second time in three nights. Charlotte pulled out a 102-101 home win on Wednesday.

Dennis Schroder scored 25 points off the bench as host Oklahoma City defeated New Orleans Pelicans in the first of two games between the teams in three days.

Chris Paul sank the go-ahead jumper with 1:24 left in the fourth quarter, and Steven Adams added a tip-in to stake Oklahoma City to a 107-104 lead. Adams capped the scoring by muscling up a left-handed dunk with 15.1 seconds remaining.

Abdel Nader scored 19 points and Danilo Gallinari added 17 for the Thunder, who will vie for a sweep of the home-and-home series when the teams reconvene in New Orleans on Sunday. Brandon Ingram finished with 26 points after shooting 11 of 17 from the floor for the Pelicans.