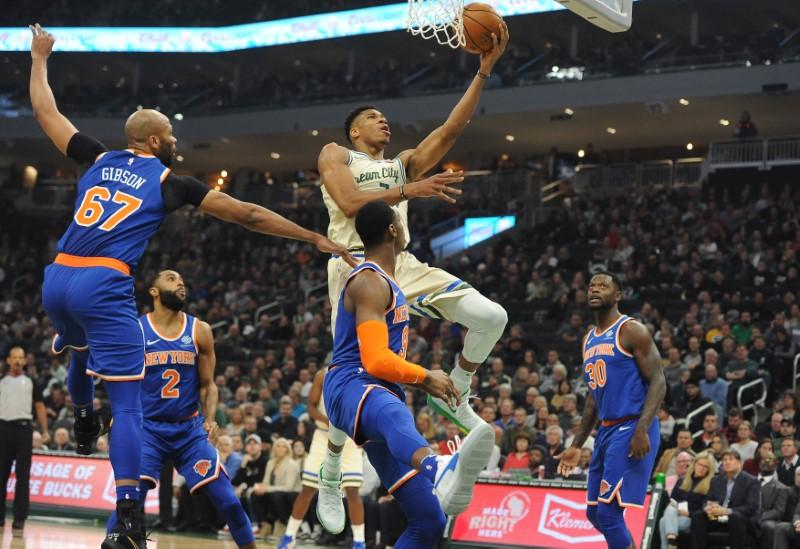 Giannis Antetokounmpo totaled 29 points and 15 rebounds in 22 minutes Monday night as the host Milwaukee Bucks easily extended their winning streak to 12 games with a wire-to-wire, 132-88 rout of the New York Knicks.

Antetokounmpo recorded his 20th double-double in 21 games, getting his latest one in 15 minutes into the first half when the Bucks asserted their will. The only time Antetokounmpo failed to get a double-double was two nights ago, when he finished a rebound shy on Saturday in Milwaukee’s 41-point win over Charlotte.

Antetokounmpo shot 10 of 14 from the floor, hit three 3-pointers and did not play for the final 16:54, spending the entire fourth quarter cheering on his teammates, including his brother Thanasis. D.J. Wilson added a career-high 19 points and Khris Middleton finished with 16 points for Milwaukee, which shot 55.8 percent and hit 16 3-pointers.

Julius Randle led the Knicks with 19 points, but New York’s other four starters — Kevin Knox, Taj Gibson, RJ Barrett, and Dennis Smith Jr. — combined for 18 points on 5-of-33 shooting. The Knicks lost their seventh game in a row.

Kelly Oubre Jr. hit two 3-point baskets in the final minute to rescue Phoenix, which blew a big lead and then recovered to win at Charlotte.

Oubre finished with 23 points, missing the first seven of his 3-point attempts before hitting twice from long range in the last minute. Booker also had 23 points, while Dario Saric posted 16 points and 10 rebounds and Frank Kaminsky and Mikal Bridges both had 12 points.

Marvin Williams scored 22 points off the bench for Charlotte. The Hornets received 15 points and 13 assists from Graham. Terry Rozier had 13 points while P.J. Washington and Cody Zeller both finished with 11 points.

Joel Embiid contributed 16 points and 11 rebounds while Ben Simmons had 14 points, nine assists, eight rebounds and four steals for the Sixers, who improved to a league-best 10-0 at home. The Sixers won their fourth game in a row.

Rudy Gobert paced the Jazz with a season-high 27 points to go along with 12 rebounds while Donovan Mitchell added 18 points. Joe Ingles had 13 points, eight assists and eight rebounds.

Trae Young scored 24 points and helped Atlanta break its 10-game losing streak with a win over visiting Golden State. It was the largest margin of victory for Atlanta this season, easily besting the previous high of 17 points against Detroit on Oct. 24.

Young reached the 20-point mark for the 18th time this season, and extended his streak of making at least 10 field goals to six games. Rookie De’Andre Hunter scored 18 points but left the game with five minutes remaining and went to the locker room with a hand injury.

Golden State got 24 points from Eric Paschall, who has scored in double figures in 11 straight games, the most by a Warriors rookie since Klay Thompson went 14 straight in 2012. Paschall added nine rebounds and six assists.

The Pacers shot 50 percent from the floor, and 16 of 38 (42.1 percent) from behind the 3-point arc. Central to the outstanding night from long range, reserves Justin Holiday and Aaron Holiday had 15 and 11 points, respectively. They combined to make eight of Indiana’s 3-pointers. Malcolm Brogdon, who scored a team-high 19 points, also led the squad with nine assists.

Lauri Markkanen stalled a Sacramento flurry with four free throws, and Zach LaVine buried a rally-killing 3-pointer with 1:15 remaining as visiting Chicago held off the Kings.

In ending a three-game losing streak, the Bulls led by as many as 19 points and were still up 92-79 with 9:01 remaining before Sacramento, much as it had done Saturday in a dramatic win over Denver, came on strong.

LaVine had a game-high 28 points and Markkanen 20 to pace the Bulls, who lost at Golden State and Portland to begin a three-game western swing. Buddy Hield totaled a team-high 26 points for the Kings.