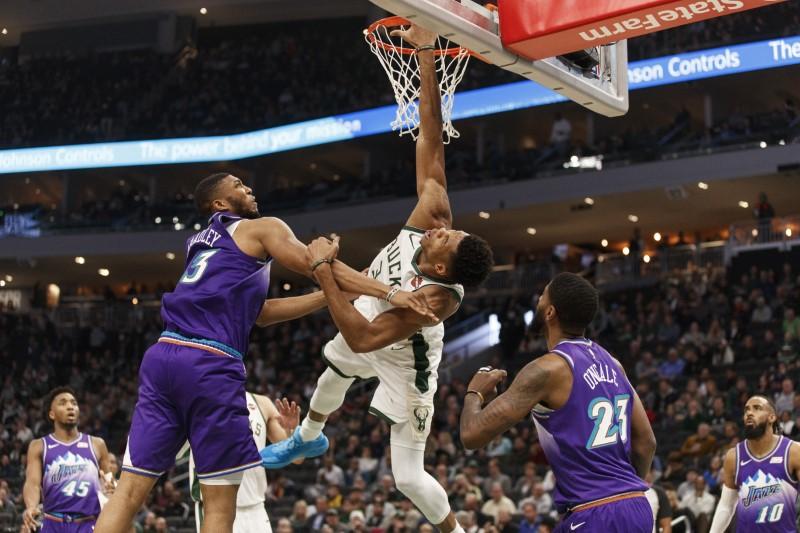 Giannis Antetokounmpo scored 50 points, collected 14 rebounds and dished out six assists to help the Milwaukee Bucks hold on for a 122-118 win over the visiting Utah Jazz on Monday night.

Wesley Matthews added 19 points and Eric Bledsoe chipped in 13 for the Bucks, who won for the 12th time in 13 games and avenged their only loss during that stretch.

Bojan Bogdanovic scored 24 points and Donovan Mitchell added 20 for the Jazz. Utah played without Rudy Gobert, who was sidelined for a second consecutive game with a sprained ankle. In Gobert’s absence, the Jazz enjoyed another fast start on offense. They shot 48.8 percent from the field in the first half — including 9 of 18 from 3-point range.

Utah rallied from a 10-point deficit in the fourth quarter and cut Milwaukee’s lead to 120-118 on Mitchell’s layup with 43.8 seconds remaining. The Jazz had a chance to tie, but Brook Lopez blocked another layup attempt from Mitchell with 4.4 seconds left.

Chris Paul buried a 19-footer with 36.8 seconds remaining as part of a 13-0, game-ending run, and Oklahoma City stunned Golden State in San Francisco.

It appeared Golden State was in line for just its second home win of the season when Glenn Robinson III capped a career-best, 25-point night with a 3-pointer with 3:18 to play, putting the Warriors up 97-87.

But Oklahoma City, in beating the Warriors for the third straight time this season, did the rest of the game’s scoring, starting with 3-pointers by Paul (20 points) and Dennis Schroder (team-high 22 points).

Spencer Dinwiddie scored 23 points and hit the game-winning jumper with 1.8 seconds as Brooklyn withstood blowing a nine-point lead in the final two-plus minutes and pulled out a dramatic victory at Cleveland.

Dinwiddie continued to fill in effectively for Kyrie Irving (right shoulder impingement), who missed his sixth straight game and is out for at least one more game. He posted at least 20 points for a career-high sixth straight game, and the Nets improved to 5-1 in those contests.

Allen added 22 points and 21 rebounds for his second career 20-20 game as Brooklyn (9-8) also moved above the .500 mark for the first time this season. Harris contributed 19 points and Prince chipped in 18 for Brooklyn. Jordan Clarkson led Cleveland with 23 points.

Pascal Siakam had 25 points for the Raptors, including a dunk as time expired in the fourth quarter, and Rondae Hollis-Jefferson contributed 16 points and 10 rebounds. The Raptors are 7-0 at home and have won 14 straight regular-season games at home against the 76ers.

Josh Richardson scored 25 points for the 76ers, Tobias Harris added 18, Al Horford had 11 points and 10 rebounds, and Ben Simmons notched 10 points, nine rebounds and 14 assists. Joel Embiid had no points on 0-for-11 shooting and 13 rebounds in 32 minutes — the first scoreless game of his career.

LeBron James poured in 33 points and dished out 14 assists to push visiting Los Angeles past struggling San Antonio for its eighth straight win.

Anthony Davis added 19 points, 15 of them in the second half, and 12 rebounds while Kentavious Caldwell-Pope scored 14 for the Lakers. Los Angeles is off to its best start since the 2008-09 season, which ended with the Lakers as NBA champions.

Kennard was among six Pistons in double figures. Blake Griffin contributed 17 points and Bruce Brown had 13 points and eight rebounds. Langston Galloway, Svi Mykhailiuk and Christian Wood all had 12 points for the Pistons, who had lost six of their previous seven games. Andre Drummond led the rebounding effort with 18.

Terrence Ross scored 19 points off the bench for the Magic, who are 0-7 on the road this season. Evan Fournier had 17 points but shot just 5-for-16 from the field. Markelle Fultz supplied 16 points.

Marcus Smart connected on a driving layup with 31.1 seconds remaining and followed with a key steal to lead host Boston past Sacramento.

Jaylen Brown led Boston with 24 points, Jayson Tatum added 20, and Smart and Enes Kanter were also in double figures with 17 and 13, respectively. Boston played without point guard Kemba Walker, who was ruled out a couple hours before tipoff due to a neck sprain.

Buddy Hield enjoyed a big night for the Kings with a career-high 41 points and a franchise-record 11 3-pointers. Harrison Barnes added 20 points, and Bogdan Bogdanovic had 13 points and eight assists for Sacramento.

Carmelo Anthony scored a season-high 25 points on 10-for-20 shooting, and Portland cruised to a win at Chicago. Anthony connected on 4 of 7 attempts from beyond the arc in his fourth game with the Trail Blazers.

CJ McCollum scored 21 points, and Damian Lillard notched a double-double with 13 points and 12 assists for Portland, which snapped a four-game losing streak.

Zach LaVine led the Bulls with 18 points on 6-for-13 shooting, and Wendell Carter Jr. had 12 points and nine rebounds. Chicago, which trailed by as many as 28 and was outrebounded 55-37, took its fifth loss in seven games.

Warren made 11 of 15 attempts from the floor and Domantas Sabonis collected 13 points and 13 rebounds for the Pacers, who shot 54.5 percent from 3-point range to record their 10th win in 13 outings. The point total also served as a season high.

Indiana’s Malcolm Brogdon had 14 points, eight assists and six rebounds in his return from a three-game absence due to a sore back. Jaren Jackson scored 28 points for the Grizzlies, and rookie Ja Morant had 19 points and 10 assists.

Miami, which led for the game’s final 41 minutes, also was powered by rookie guards Tyler Herro (18 points) and Kendrick Nunn (19 points, 5-of-6 3-pointers). Terry Rozier topped the Hornets with 19 points and nine rebounds.

The Timberwolves won for just the second time in six games while sending the Hawks to their seventh loss in a row.

Minnesota trailed by 10 points at halftime, but a 39-point eruption in the third quarter powered the Timberwolves into a lead they maintained for the duration of the fourth. The Hawks got a game-high 37 points from Trae Young and 22 from Jabari Parker.