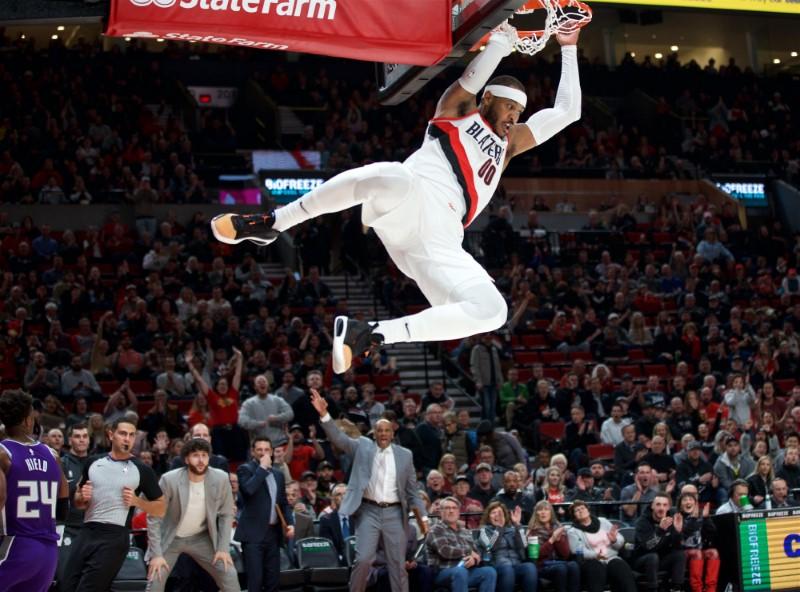 Anthony signed a non-guaranteed, one-year, $2.15 million deal upon joining the team last month but his production has fast-speeded the decision.

The team has until early January to guarantee the deal but apparently figures there is no reason to wait.

Anthony was Western Conference Player of the Week last week after averaging 22.3 points and 7.7 rebounds. Overall, the 10-time All-Star is averaging 16.9 points and 5.9 rebounds and has scored at least 20 points in three of his eight games with the team.

—Not backing down in their fight to overturn their 135-133 double-overtime loss to the San Antonio Spurs, the Houston Rockets plan to file an official protest over the James Harden dunk that wasn’t counted, multiple media outlets reported.

The Rockets planned to file their appeal within the 48 hours required to protest. Relevant evidence by both teams must then be provided within five days. After receiving the evidence, NBA commissioner Adam Silver must issue a ruling within a five-day period.

The Rockets were hoping a judgment by the league wouldn’t require filing a protest but are doing so to ensure the NBA makes a ruling.

Bagley, who fractured his right thumb in the Oct. 23 season-opening game against the Phoenix Suns, will be listed as day-to-day, according to the club.

There isn’t yet a projected return date for Bagley, the promising second-year pro who recorded 14 points and 10 rebounds in the opening contest. Bagley was projected to miss four to six weeks when he suffered the injury.

The 28-year-old McRae is averaging 8.9 points, 2.4 rebounds and 2.8 assists in 13 games off the bench this season. He is shooting 47.3 percent from the field, which is the best mark of his career, along with 39.4 percent from 3-point range on a career-high 2.5 attempts per game.

The Tennessee alum initially injured his finger in the season opener against the Dallas Mavericks. He received a pin in his injured finger, but the pin became dislodged during a dunk Nov. 22 against the Charlotte Hornets.

—The Los Angeles Lakers’ LeBron James took to Instagram one day after he was criticized by Utah Jazz announcers for celebrating teammate Kyle Kuzma from the side of the court while not wearing his shoes.

James, who had given away his shoes to two kids in the crowd, gave his side of the story through his Instagram account.

“Imagine doing your job at the highest level to where you’re not needed anymore, giving your shoes to a lil girl and boy who you inspire and hoped you made proud that night, then cheering on your teammates cause you love seeing them succeed more than yourself only to be criticized while doing it,” James wrote.

—The woman who accused Sacramento coach Luke Walton of sexually assaulting her in a hotel room in 2014 has dropped her lawsuit.

Sports reporter Kelli Tennant filed papers this week with the Los Angeles County Superior Court to have her lawsuit dismissed, per multiple reports.

The NBA concluded its investigation of Tennant’s allegations in August and determined that there was insufficient evidence to support her claims.