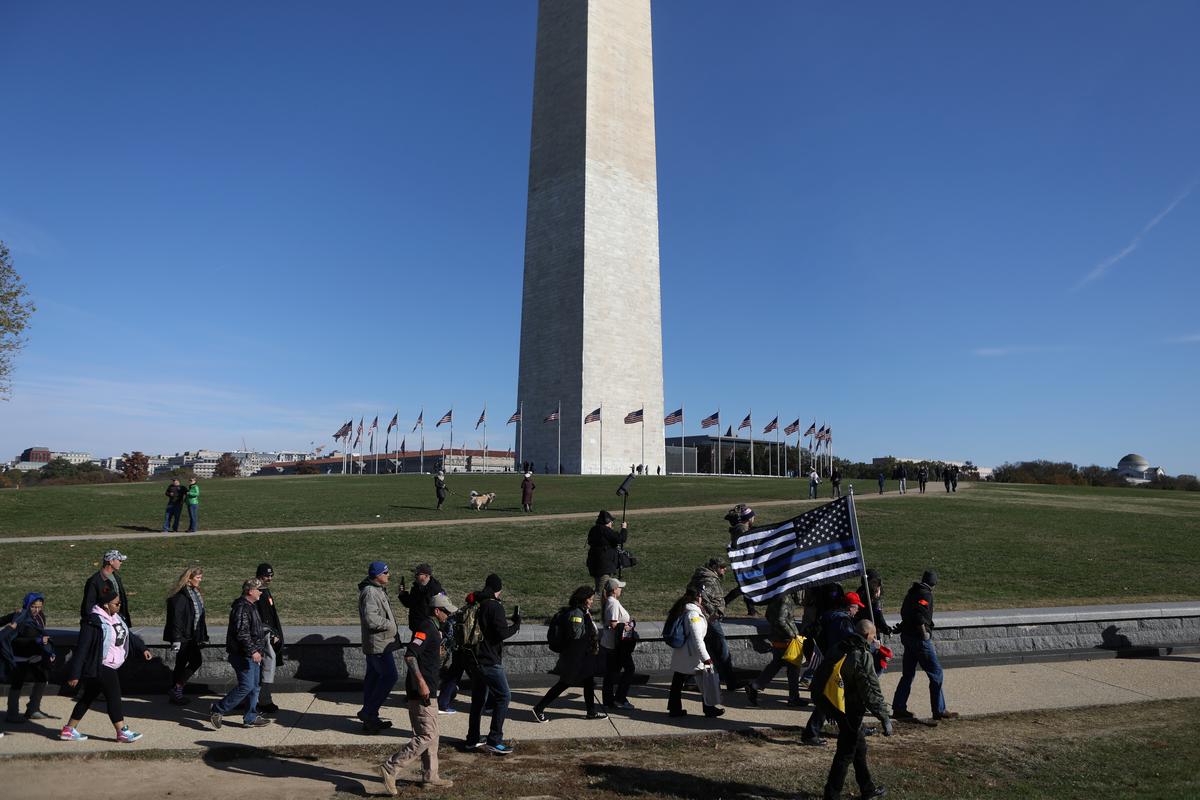 WASHINGTON (Reuters) – Militias and conservative activists rallied in Washington on Saturday to demand protection of gun ownership rights, term limits for lawmakers in Congress, and tighter U.S. borders against immigrants, among other things.

Waving American flags, Confederate flags, and a Trump 2020 flag, the crowd of about 100 activists deposited their firearms at a park in northern Virginia before crossing a bridge into the District of Columbia, where guns cannot be openly carried.

The rally wrapped up peacefully, though it came amid concerns about a surge in political violence after clashes between activists at events such as the 2017 right-wing rally in Charlottesville, Virginia, in which a woman was killed.

Gathered on the Washington mall between the White House and Congress, the demonstrators vowed on Saturday to be more active ahead of the elections in November 2020.

“What’s been happening the past several years isn’t working, so you’re going to be seeing more of this,” said Gary Sigler, who led security for the event and formerly led a Maryland militia.

Sigler, 48, said he also patrolled Virginia’s statehouse in July alongside several other militia members when a special legislative session was held to discuss changes to gun laws.

After that event, Virginia’s attorney general said the militia members may have violated state law by purporting to secure a public area, a role reserved to law enforcement bodies.

Sigler’s roughly 30-member security team on Saturday decided against wearing battle fatigues in order to be more approachable, he said. Instead, they carried walkie-talkies and earpieces, and wore matching black shirts, khaki pants, and orange armbands.

But some attendees said they feared the spectacle still might intimidate onlookers.

“They’re giving off a little ‘I want to take over the government’ vibe, even though most people here just want to fix it,” said Michael Cosper, the president of Heartland Defenders, an Ohio group that does not identify as a militia but holds firearm training in addition to preparing for emergencies.

Other groups in attendance, however, said they were bracing for a period of political violence in the country.

“We do a lot of military training. Whatever the Army does, we’ll do it too, so we’re ready when shit hits the fan,” said Carrie Cordell of Pennsylvania, commander and founder of Freedom Patriot Defenders. Cordell, 44, said she prefers not to call the group a militia, despite the training it engages in.

Cordell attended Saturday’s rally with her mother and Sid Helms, 62, who serves as Cordell’s general. He said immigration was one of his top grievances.

“We’re being invaded, and that’s going to provoke a response from those who want to defend this country. Wherever we need to be, we’re going to try to be there, whether it’s the election process or anything else,” said Helms.