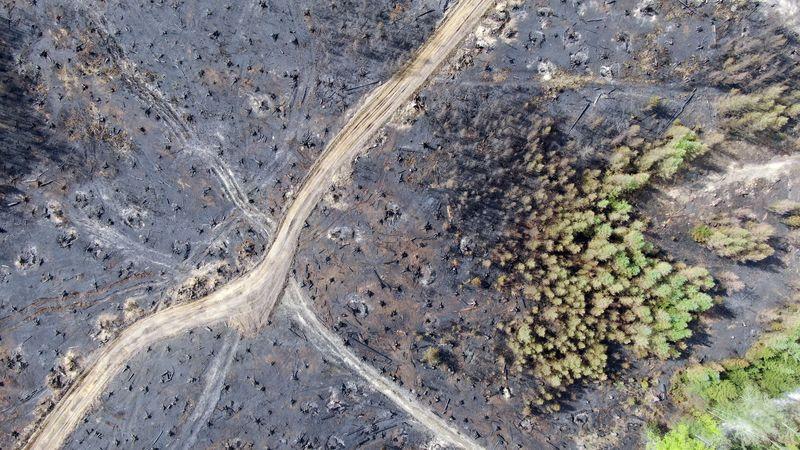 GUMMERSBACH, Germany (Reuters) – Germany’s forests, covering a third of its territory and as much a part of its cultural landscape as its physical one, are in danger.

An aerial view shows a forest near Gummersbach, Germany, April 24, 2020, following an unusually warm, dry winter after a summer of record temperatures leaving forests dried out. Picture taken with a drone. REUTERS/Stephane Nitschke

On Germany’s annual “Day of the Tree”, Chancellor Angela Merkel used her weekly video message to highlight a growing threat from climate change.

The last two exceptionally hot and dry summers have weakened millions of trees, undermining their defences against the bark beetle, which can be fatal to ancient woodlands.

And after an exceptionally dry April, with summer still two months away, a forest fire has already had to be put out near the town of Gummersbach in western Germany this week.

“We’re already noticing these days that it’s not raining enough in many areas of Germany,” Merkel said.

Danny Ohnesorge, head of the Association of the German Wood Industry, told German radio there had been only 5% of the usual rainfall in April and that, if the drought continued, trees could die en masse.

Concern has been mounting in recent years about the impact of climate change on Germany’s heavily forested landscapes, scene of many of its Romantic myths, legends and fairy tales.

Ursula Heinen-Esser, environment minister of the western state of North Rhine-Westphalia, said the soil had been wet enough until the beginning of March.

“Within a few weeks, it’s completely reversed, and we’re now dealing with drought,” she said. “It’ll also have a major impact on the forest and on bark beetle infestation.”

There is always an increased risk of forest fires in spring from the dry, dead leaves lying on the ground before new plants grow, but it is particularly acute this year, said Mathias Niesar from the state’s forest and climate protection team.

“This is an extremely explosive situation, where really just a few sparks or a spark can be enough to cause such a catastrophe here,” he told Reuters television.