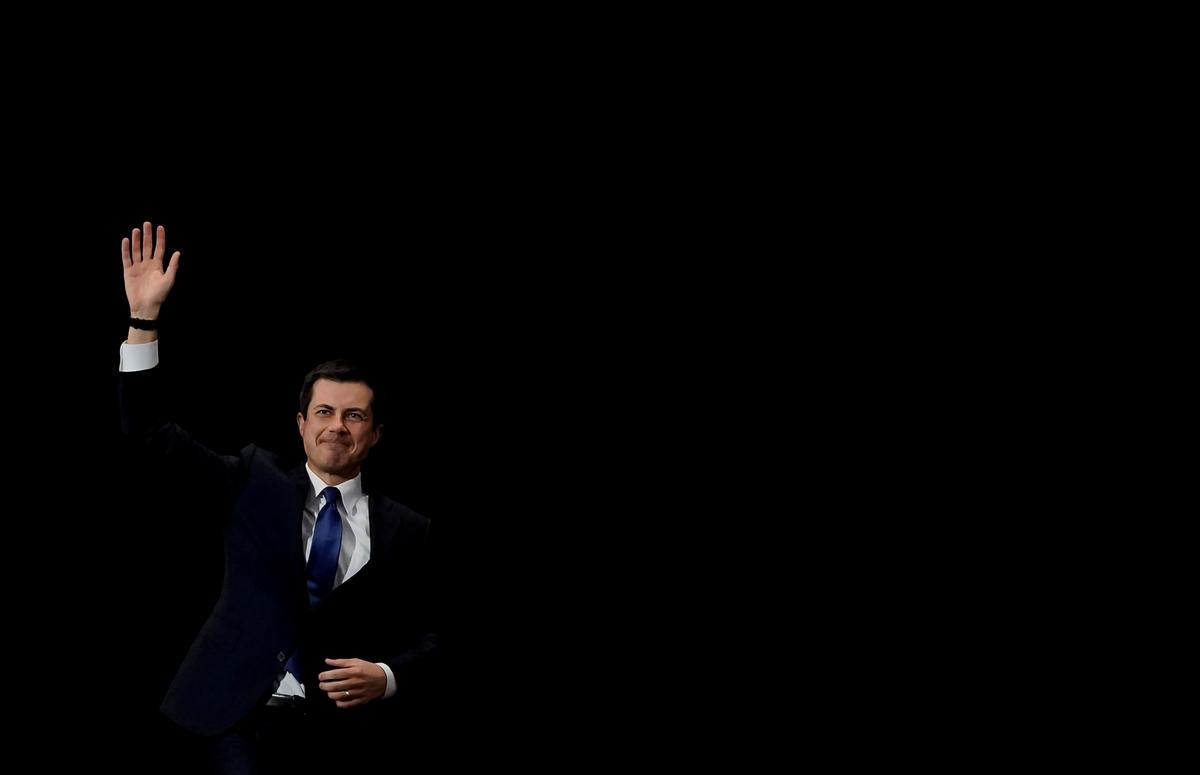 DETROIT (Reuters) – Pete Buttigieg, who entered the Democratic presidential race as a relative unknown and positioned himself as the future of the party during an improbable rise to the top tier of a crowded field, ended his White House bid on Sunday.

Buttigieg, 38, a former two-term mayor of South Bend, Indiana, an Afghanistan war veteran and the first openly gay candidate to make a competitive run for the U.S. presidency, narrowly won the Iowa caucuses that kicked off the nominating race in February and finished a close second in New Hampshire.

But his early momentum from those rural, mostly white states did not translate into electoral success in the more diverse states of Nevada and South Carolina.

After finishing a distant third in the Nevada caucuses, Buttigieg came in fourth on Saturday in South Carolina, where he won support from just 3% of African-American voters.

The centrist Democrat’s withdrawal from the race could help former Vice President Joe Biden, a fellow moderate who got a much-needed victory on Saturday and now is looking to wrest momentum from liberal front-runner Bernie Sanders in this week’s 14-state Super Tuesday nominating contests.

Speaking in South Bend, Buttigieg said his campaign began its “unlikely journey” with a staff of four, no big email lists and no personal fortune.

“We got into this race in order to defeat the current president and in order to usher in a new kind of politics,” Buttigieg told a crowd of supporters. Now, he said, it was time to “step aside and help bring our party and our country together.”

In a tweet, Biden said Buttigieg had run a “trail-blazing campaign based on courage, compassion, and honesty,” adding: “This is just the beginning of his time on the national stage.”

Buttigieg had sought to unite Democrats, independents and moderate Republican voters, arguing his status as a Washington outsider could rebuild a majority to defeat Republican President Donald Trump in November’s election.

But he faced persistent questions about his ability to win over black voters, a core Democratic voting bloc.

Buttigieg’s tenure as South Bend mayor, which ended on Jan. 1, drew scrutiny for a lack of diversity on the local police force and a fatal shooting of a black resident by a police officer. He also lacked Biden’s national profile or long-standing relationships with the black community.

Buttigieg would have been the first openly gay major-party presidential nominee in U.S. history. He did not make his sexuality a centerpiece of his candidacy, although his husband, Chasten Buttigieg, a teacher he married in 2018, regularly accompanied him on the campaign trail.

Buttigieg, often referred to simply as “Mayor Pete,” promised a departure from the politics of the past. As a “proud son” of Indiana, he argued he could speak directly to voters struggling economically in crucial swing states such as Michigan and Wisconsin that handed Trump the presidency in 2016.

A U.S. Navy veteran who often spoke of his military service and Christian faith, Buttigieg was critical of Sanders’ uncompromising liberal proposals, which Buttigieg warned could alienate moderate Democratic voters ahead of “the fight of our lives” to unseat Trump.

At the televised debate ahead of the South Carolina primary, Buttigieg said Sanders’ shifting estimates to fund proposals such as a government-run healthcare system for all would doom the Democratic Party in November.

“I can tell you exactly how it all adds up. It adds up to four more years of Donald Trump,” Buttigieg said.

Buttigieg had considerable early success in fundraising, proving popular with the Hollywood and big-tech money scenes. He came under fire from Democratic competitors, including Senator Elizabeth Warren, who questioned whether he was beholden to his big-money donors and criticized his ritzy, closed-door fundraiser in a wine cave in California.

His campaign, however, faced tighter purse strings after heavy investments in the first two voting states and raised only $6 million in January. Sanders, by comparison, raised $25 million the same month.

Before Biden’s South Carolina win, Buttigieg had argued he was the only candidate who had proven he could beat Sanders in state contests. His campaign had laid out a strategy to get through Super Tuesday contests and focus on later primaries where it believed it had an edge.

That changed as the race remained outsized and questions mounted about possibly non-viable contenders splitting moderate votes to give Sanders, a self-described democratic socialist, an easy path to the nomination. A campaign aide told Reuters that Buttigieg was not going to be a “spoiler” who helped Sanders win.

Still, his decision to drop out before Super Tuesday caught some supporters by surprise. Buttigieg spent the day in Selma, Alabama, commemorating a landmark civil rights march in 1965. A big crowd had gathered later on Sunday for the candidate’s scheduled event in Dallas when they learned he was no longer coming.