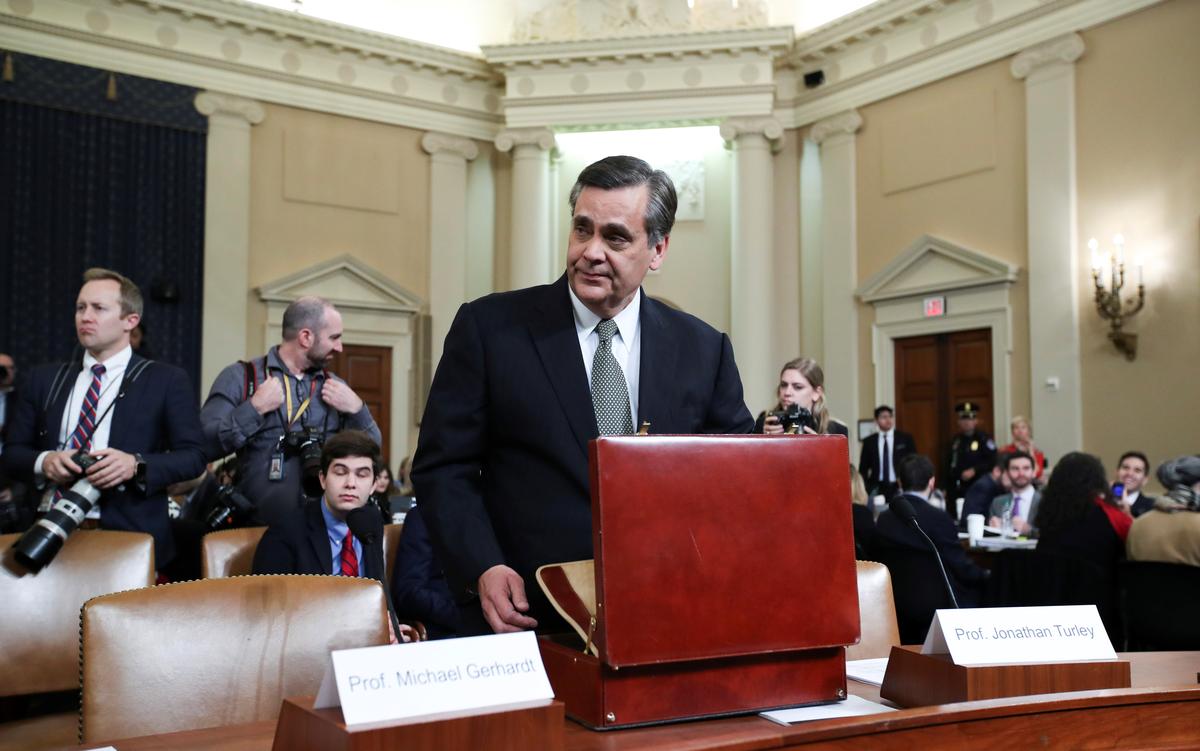 A law professor selected by Trump’s fellow Republicans said that the impeachment inquiry lacked testimony from people with direct knowledge of the events and that current evidence did not show that Trump had committed “a clear criminal act.”

The hearing featured political theatrics. From the outset, Republicans repeatedly tried to interrupt the proceedings by raising objections and points of order. One of the three professors called by the Democrats told the committee’s top Republican, Doug Collins, she felt insulted by his remarks.

The impeachment inquiry launched by the Democratic-led House in September focuses on the Republican president’s request for Ukraine to conduct investigations that could harm Democratic political rival Joe Biden.

The Judiciary Committee heard from the four law professors during its first hearing to examine whether Trump’s actions qualify as the “high crimes and misdemeanors” punishable by impeachment under the U.S. Constitution. If the House approves articles of impeachment – formal charges – then Senate then would hold a trial on whether to remove Trump from office.

The three committees leading the inquiry issued a report on Tuesday formally accusing Trump of abusing his office by soliciting foreign interference to boost his 2020 re-election chances, undermining national security and ordering an “unprecedented” campaign to obstruct Congress. Another House panel previously held a round of public hearings with testimony from current and former U.S. officials.

In London, Trump called the impeachment report a “joke” and appeared to question the patriotism of the Democrats, asking, “Do they in fact love our country?” Trump has denied wrongdoing.

The Judiciary Committee heard from the professors on what constitutes an impeachable offense and how Trump’s actions compare with those of two former presidents – Republican Richard Nixon, who resigned after the House launched the impeachment process, and Democrat Bill Clinton, who was impeached by the House but not removed by the Senate.

The focus of the inquiry is a July 25 telephone call in which Trump asked Ukrainian President Volodymyr Zelenskiy to open an investigation into Biden and his son Hunter Biden and into a discredited theory that Ukraine, not Russia, meddled in the 2016 U.S. election.

Hunter Biden had joined the board of Ukrainian energy company Burisma while his father was U.S. vice president. Trump has accused the Biden’s of corruption without offering evidence. They have denied wrongdoing.

The three professors chosen by the Democrats made clear they believed Trump’s actions constituted impeachable offenses.

“The president’s conduct described by the testimony embodies the (Constitution’s) framers’ concern that a sitting president would corruptly abuse the powers of office to distort the outcome of a presidential election in his favor,” Harvard University law professor Noah Feldman told the panel.

‘A KING ON AMERICAN SOIL’

“If Congress fails to impeach here, then the impeachment process has lost all meaning, and, along with that, our Constitution’s carefully crafted safeguards against the establishment of a king on American soil. No one, not even the president, is beyond the reach of our Constitution and our laws,” Gerhardt said.

Witness Jonathan Turley, a professor of law at George Washington University Law School, takes his papers from his briefcase as he prepares to testify at the start of a House Judiciary Committee hearing on the impeachment Inquiry into U.S. President Donald Trump on Capitol Hill in Washington, U.S., December 4, 2019. REUTERS/Tom Brenner

Stanford University law school professor Pamela Karlan said Trump abused his power by demanding foreign involvement in a U.S. election, adding that the president’s actions “struck at the very heart of what makes this country the republic to which we pledge allegiance.”

Karlan said the evidence showed that Trump sought to “strong arm” Zelenskiy into smearing one of his rivals, adding, “This is not politics as usual – at least not in the United States or any other mature democracy. It is, instead, a cardinal reason by the Constitution contains an impeachment power.”

She pushed back at Collins for saying the witnesses could not have absorbed the evidence gathered in the inquiry. “I’m insulted by the suggestion that as a law professor I don’t care about those facts,” Karlan said.

George Washington University Law School Professor Jonathan Turley, the only witness chosen by the Republicans, said the current evidence does not adequately support the Democrats’ allegations against Trump.

Still, Turley admonished Trump over the call to Zelenskiy – disagreeing with Trump that the conversation was “perfect” – and said leveraging U.S. military aid to investigate a political opponent “if proven, can be an impeachable offense.”

Democrats have accused Trump of abusing his power by withholding $391 million in security aid to Ukraine – a vulnerable U.S. ally facing Russian aggression – as leverage to pressure Kiev into conducting the two investigations politically beneficial to Trump and for granting Zelenskiy a coveted White House visit.

The money, approved by the U.S. Congress, was provided to Ukraine in September only after the controversy had spilled into public view.

The Democratic-drafted impeachment report appeared to lay the groundwork for at least two articles of impeachment: abuse of power and obstruction of Congress.

The committee could move quickly in the coming weeks to recommend articles of impeachment against Trump, setting up a possible vote by the full House before Christmas, followed by a trial in the Senate in January. Republicans, who control the Senate, have shown little appetite for removing Trump from office.

A 110-page House Republican report released on Monday that said the probe uncovered no evidence of an impeachable offense.

Like the president, Republicans maintain that the Democratic investigation is a politically motivated sham, with evidence cherry-picked by the lead investigator, House Intelligence Committee Chairman Adam Schiff.

“You know where this started? It started with tears in Brooklyn in November 2016 when an election was lost. So we are here, no plan, no fact witnesses, simply being a rubber stamp,” the committee’s top Republican Collins said, referring to the New York borough where 2016 Democratic candidate Hillary Clinton had her campaign headquarters.

Reporting by David Morgan and Patricia Zengerle; Additional reporting by Doina Chiacu and Susan Heavey in Washington and Steve Holland in London; Writing by Alistair Bell; Editing by Ross Colvin and Will Dunham