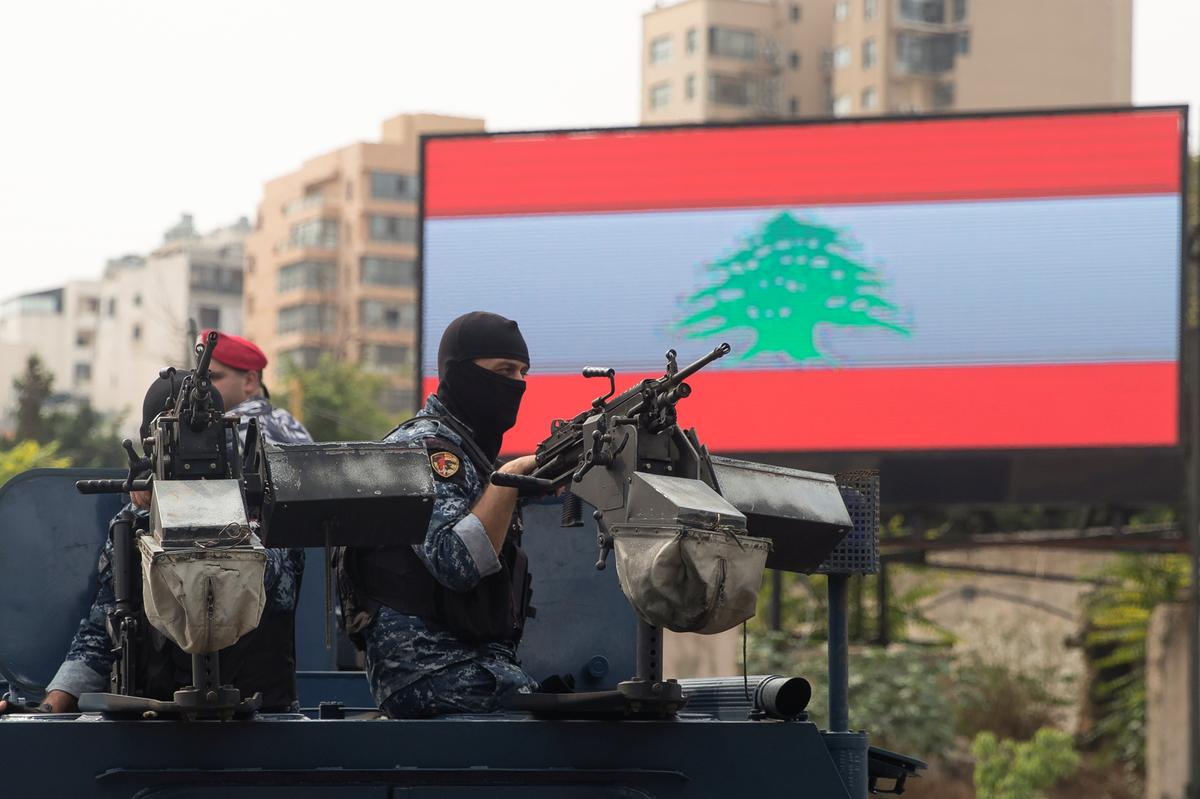 BEIRUT (Reuters) – Protesters trickled back on to the streets across Lebanon on Saturday, despite army efforts to unblock roads, with no end in sight to a crisis that has crippled the country for 10 days.

A riot police officer is seen on an armoured vehicle following a police operation to open a highway blocked by demonstrators during ongoing anti-government protests in downtown Beirut, Lebanon, October 26, 2019. REUTERS/Alkis Konstantinidis

A military statement said army and security commanders met to plan ways to re-open main arteries to get traffic flowing again while “safeguarding the safety of protesters”. People have closed routes with barriers and sit-ins as part of a wave of unprecedented protests demanding the government resigns.

Lebanon has been swept by 10 days of protests against a political class accused of corruption, mismanagement of state finances and pushing the country towards an economic collapse unseen since the 1975-90 civil war.

Banks, schools, and many businesses have shut their doors.

“We won’t leave the streets because this is the only card that people can pressure with,” Yehya al-Tannir, an actor protesting at a makeshift barricade on a main bridge in the capital Beirut. “We won’t leave until our demands are met.”

Troops and riot police deployed to main roads across Lebanon on Saturday.

The forces re-opened some roads for a few hours on Saturday morning before people gathered again. On the bridge in Beirut, riot police scuffled with protesters who were sitting on the ground to keep it closed.

Protesters have resisted efforts earlier this week to open some roads, including along a main highway.

Banks will stay closed until life returns to normal and will pay month-end salaries through ATMs, the Association of Banks in Lebanon has said.

It has held crisis meetings in recent days in search of a way to reopen banks amid growing fears that a rush on them could deplete dwindling foreign currency deposits.

The protests have continued to grip Lebanon despite the government announcing an emergency reform package this week that failed to defuse anger. It has also yet to reassure foreign donors to unlock the billions in badly needed aid they have pledged.

Lebanon has one of the world’s highest levels of government debt as a share of economic output.

The size and geographic reach of the protests have been extraordinary in a country where political movements have long been divided along sectarian lines and struggle to draw nationwide appeal.

On Saturday, the first day of Lebanon’s weekend, people milled around to patriotic music, waving Lebanese flags and banners in central Beirut.

In the southern coastal city of Saida, some shops opened their doors after days of closure.

“Shopkeepers are opening up to see if they can get things moving. The end of the month is near, people have rents to pay,” said protester Hoda Hafez. “But in the end, they will all take part and come down to the (protest) square.”

The leader of Lebanon’s powerful Hezbollah movement, backed by Iran, warned on Friday against a power vacuum and urged followers to stay away from the protests after they confronted demonstrators in central Beirut.