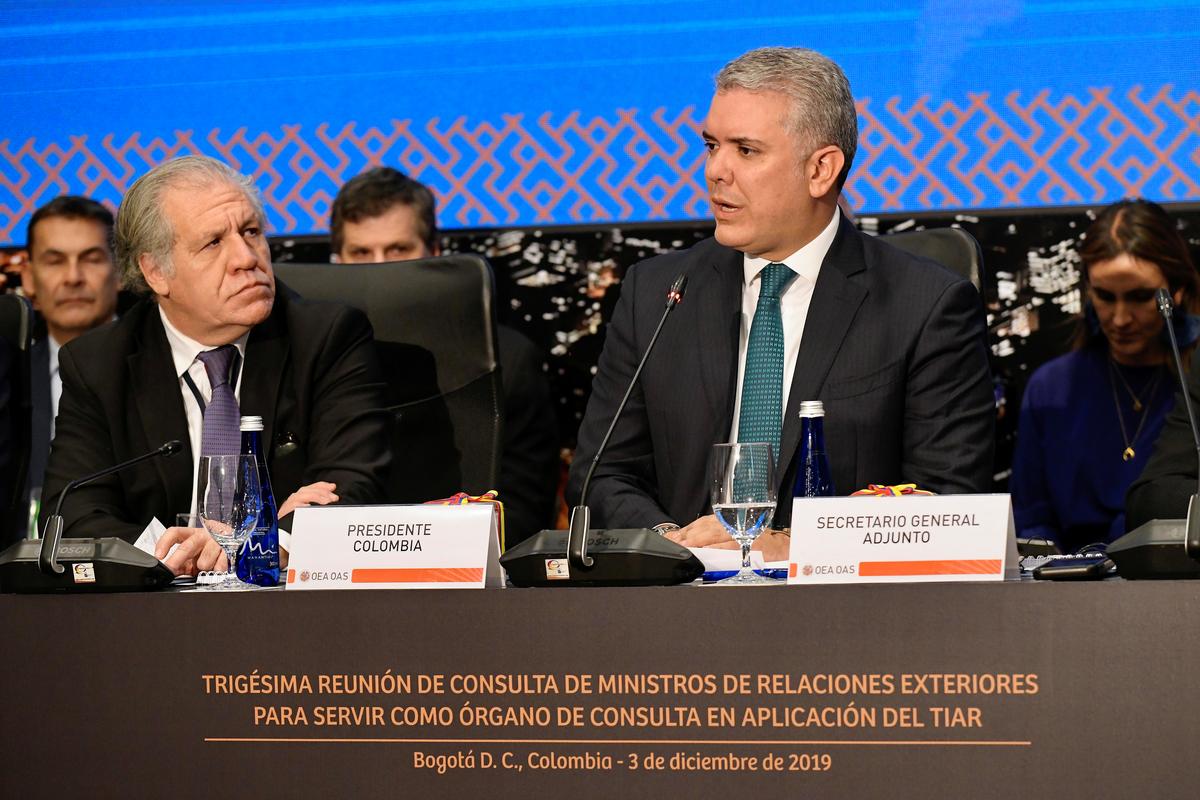 BOGOTA (Reuters) – Fifteen countries in the Americas agreed on Tuesday to ban 29 Venezuelans, including the oil-producing country’s president, Nicolas Maduro, and his close allies, from traveling within their borders as part of diplomatic efforts to push him to step down.

Colombia’s President Ivan Duque speaks next to OAS General Secretary Luis Almagro, during a meeting of foreign ministers from countries that are signatories to the Inter-American Treaty of Reciprocal Assistance, known by its Spanish initials TIAR, in Bogota, Colombia December 3, 2019. Efrain Herrera/Colombian Presidency/Handout via REUTERS ATTENTION EDITORS – THIS IMAGE WAS PROVIDED BY A THIRD PARTY NO RESALES. NO ARCHIVES.

The meeting included representatives from Argentina, Brazil, the United States, Colombia, Chile and Peru, all signatories of the Inter-American Treaty of Reciprocal Assistance (TIAR), an accord that promises mutual defense among members of the Organization of American States (OAS).

The group in September approved the identification, sanctioning and extradition of leading members of Venezuela’s government who it said were linked with activities related to money laundering, drug trafficking and terrorism.

The list of people banned on Tuesday from traveling to the 15 TIAR countries also included top Maduro allies such as Foreign Minister Jorge Arreaza, Defense Minister Vladimir Padrino, Vice President Delcy Rodriguez and Diosdado Cabello, the No. 2 of the ruling Socialist Party.

Cabello dismissed the measures by the TIAR countries.

“I reject the imperialist attempt and the attempts of these North American allies to come and involve themselves in Venezuela’s internal matters. Venezuela demands respect,” Cabello said, following a march against the meeting in Caracas.

Some 500 people linked to Maduro have already been targeted by various sanctions, said Julio Borges, who attended the meeting as a representative of Venezuelan opposition leader Juan Guaido, who argues Maduro’s 2018 re-election was illegitimate. Guaido this year invoked the constitution to assume an interim presidency. Most Western countries have backed him as head of state.

Maduro has said Guaido is a puppet of the United States.

The countries at Tuesday’s meeting discussed new measures to support a re-establishment of democracy and respect for human rights in Venezuela, said Colombia’s foreign minister, Claudia Blum, as part of a strategy to stem migration flowing from the country.

“At this meeting there are no unilateral decisions nor invitations to use force,” Colombian President Ivan Duque said. “There is only an open invitation to strengthen diplomatic pressure so that every time it is more effective.”

The OAS should avoid “extreme” positions when confronting regional crises like Venezuela’s and instead promote dialogue, Hugo de Zela, Peru’s ambassador to the United States and candidate for OAS secretary-general, told Reuters on the sidelines of the meeting.

Prepare to study in Canada
Study permit: Who can apply
Alberta To Give PNP Preference To Immigrants With Family In Province
Canada Governments Urged To Encourage Immigration To Smaller Communities
Here Are The Top 15 Jobs In Canada For 2023
Express Entry Now Allows Estheticians To Immigrate To Canada
Canada Doubles Number Of Out-Of-Status Toronto Construction Workers Eligible For Permanent Residence