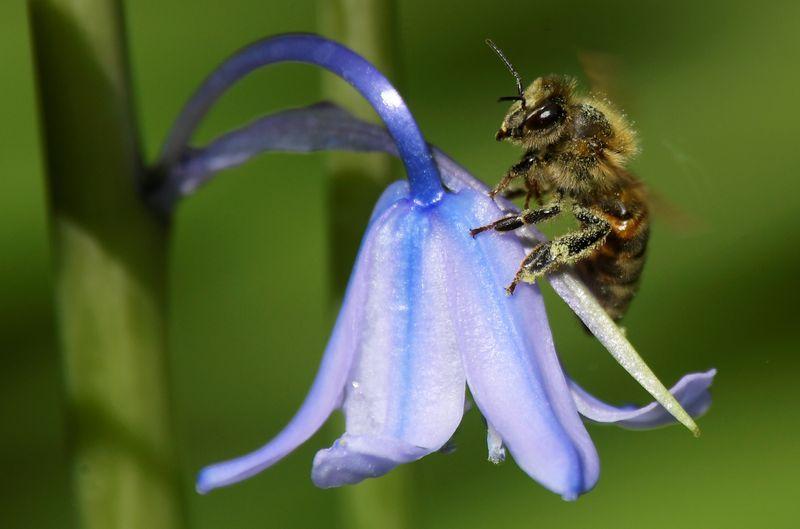 WASHINGTON (Reuters) – The world’s ants, bees, butterflies, grasshoppers, fireflies and other land-dwelling insects have been suffering population drops of about 9% per decade but freshwater bugs such as dragonflies and mosquitoes have been rallying, researchers said on Thursday.

FILE PHOTO: A bee lands on a bluebell in a garden in West London, Britain, April 23, 2020. REUTERS/Toby Melville/File Photo

The findings, based on 166 sets of data covering 1,676 sites in 41 countries dating as far back as 1925, provided a nuanced assessment for insects, the most ubiquitous and diverse animals on the planet, with the strongest declines documented in the Midwestern United States and in Germany.

Insects such as mosquitoes – which live in the water as larvae – as well as midges, mayflies, water beetles and caddisflies that spend at least part of their lives in freshwater were found to have experienced a population increase of about 11% per decade.

Freshwater covers only about 2.5% of the Earth’s surface, so the vast majority of insects live on land.

The number of insects on average has declined in the air, in the grass and on the soil surface, but not in trees or underground, the researchers found.

Projecting the trends into the future shows that land-dwelling insects would sustain a population drop of 24% over 30 years while the freshwater bugs would experience a 38% increase over the same period.

“Insects are a central part of almost all ecosystems because they stand in the middle between the plants they eat and the animals that eat insects, like birds, bats and lizards,” said entomologist Roel van Klink of the German Centre for Integrative Biodiversity Research, lead author of the research published in the journal Science.

“They also impact our own lives, often in ways we don’t think about. Insect pollinate many of our crops, and without them we would have no fruits and no flowers. But at the same time, insects transmit terrible diseases like malaria, Zika and West Nile virus, they eat our crops and damage tree plantations,” van Klink added.

The study did not break down the findings by species. There was scant data from South Asia and the Middle East, and limited data from Africa.

The researchers credited clean-water policies instituted in recent decades for the increase in freshwater bugs.

They attributed the declines in land-dwelling insects to human activities such as habitat destruction and fragmentation, urbanization, light pollution and chemical pollution, while saying insecticides and increased droughts due to climate change may also have played a role.