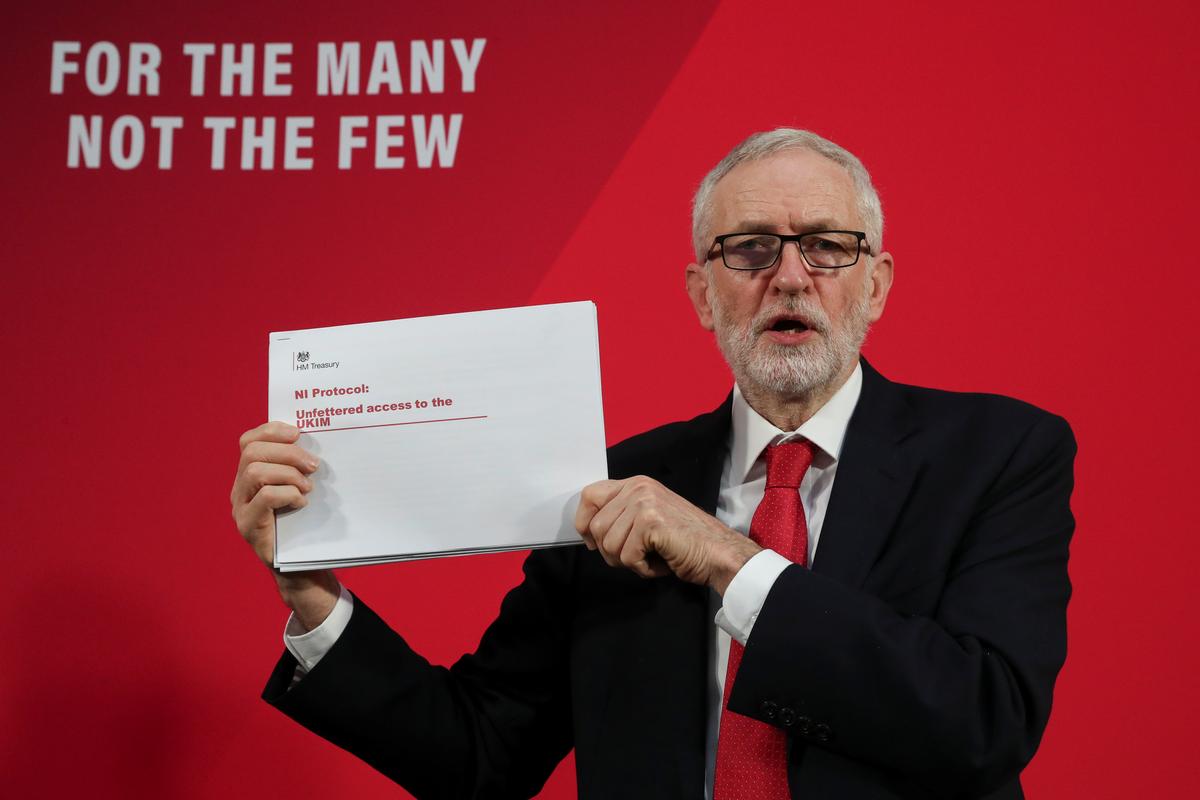 DETLING, England (Reuters) – British opposition Labour leader Jeremy Corbyn went on the Brexit offensive on Friday, seeking to hit back at Prime Minister Boris Johnson’s main campaign message as they both prepared for a final TV showdown ahead of next week’s election.

Polls show Johnson’s Conservative Party is well ahead of Labour six days before Britons vote in an election which could finally resolve the impasse over Britain’s departure from the European Union, three years after a divisive referendum.

The latest survey by Ipsos MORI on Friday showed Labour closing the gap although Johnson’s party remained 12 points clear and on course to win a majority in parliament. Brexit remained the biggest issue for voters, it found.

Johnson, who renegotiated a new divorce deal with the EU in October, has promised to “get Brexit done”, a slogan he has repeated constantly during campaigning in a bid to win over Labour supporters who backed leaving the bloc, and those who are simply fed up of the political haggling over the issue.

Britons voted by 52%-48% in 2016 for Brexit but parliament has failed to agree a way forward with Johnson calling the election having lost his majority.

If Johnson wins, Britain will leave the EU by Jan. 31 and then seek to enact a trade agreement with the bloc by the end of 2020.

Corbyn went on the attack on the issue on Friday, calling Johnson’s promises a fraud and saying his Brexit deal would simply be the start of years of “painful negotiations and broken promises”.

He also revealed a leaked government document which he said showed the divorce deal would lead to customs declarations and security checks between Britain and Northern Ireland, a direct contradiction to Johnson’s statements that it would not create any barriers with the British province and the mainland.

The confidential Treasury report said the impact of the deal would be higher prices and that 98% of Northern Irish exporters would struggle to bear the additional costs.

“There will be other secret reports like this one in every government department that reveal the disastrous impact of Johnson’s damaging deal,” Corbyn said.

He has ridiculed the stance adopted by Corbyn, who has said a Labour government would strike another exit deal with the European Union to include a customs union, and then hold a second referendum on whether Britons wanted to accept it, with Corbyn himself vowing to remain neutral.

“Have we sent out search parties to discover Jeremy Corbyn’s position on the EU?” Johnson said in a speech to supporters in southeast England. “If you want to get this thing done, if you want to the country to move forward, you’ve got to vote Conservative.”

The two leaders will face off later in the last leaders’ TV debate, with Brexit likely to be to the fore.

Johnson’s appearance comes a day after he was accused in an on-air challenge by veteran BBC journalist Andrew Neil of ducking an interview in which he would have faced questions about his trustworthiness.

Meanwhile, former Conservative Prime Minister John Major will on Friday call for voters to back three rebels who Johnson expelled from his party, saying Brexit was the “worst foreign policy decision in my lifetime”.

Corbyn’s own leadership has been called into question by some of his own ex-lawmakers and by those who say he has allowed anti-Semitism to become rife in the party.