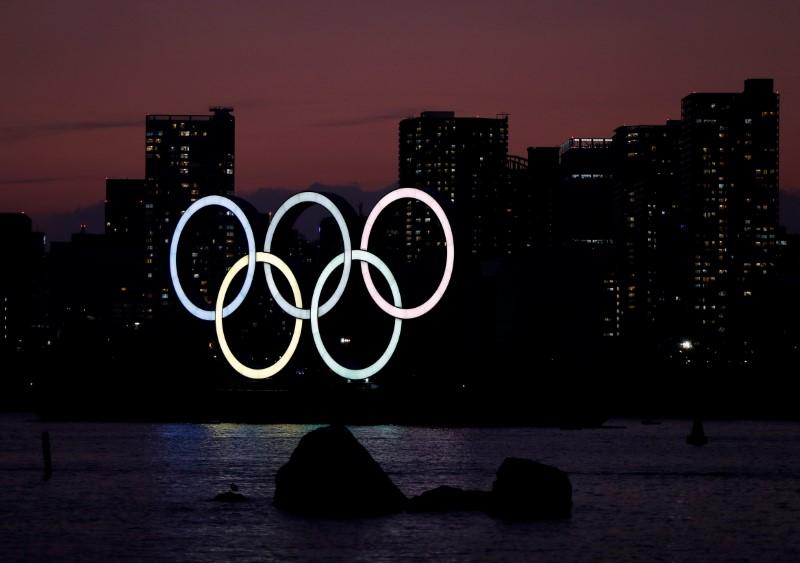 ATHENS (Reuters) – The International Olympic Committee faced mounting opposition on Sunday to the current schedule for the Tokyo 2020 Games as athletes, teams and federations called for a delay because of the coronavirus pandemic.

The giant Olympic rings are seen in the dusk at the waterfront area at Odaiba Marine Park in Tokyo, Japan, March 22, 2020. REUTERS/Issei Kato

IOC President Thomas Bach, who has insisted the Games will go ahead as planned, said any decision to change an Olympic Games was not a simple matter like rescheduling a soccer match and would need careful planning and information.

“The Olympic Games cannot be moved like a football game next Saturday,” he told Germany’s SWR broadcaster. “It is a complex undertaking and you can only act responsibly when you have a clear decision-making foundation.”

He also ruled out cancelling the July 24-Aug. 9 Games.

“A cancellation of the Games would be the least fair solution. A cancellation would destroy the Olympic dream of 11,000 athletes of 206 Olympic committees.”

Sources told Reuters on Sunday, however, that Tokyo Games organizers had started drafting possible alternatives to holding the Olympics this summer.

“Finally, we have been asked to make a simulation in case of a postponement,” a source close to the organizing committee who is involved in drafting the scenarios said.

Other sources within the Olympic movement said the IOC was likely to hold an unscheduled executive board meeting as early as next week.

One source told Reuters the meeting could be “very, very early next week.” The IOC did not comment.

Countries have sealed borders and enforced lockdowns to fight the pandemic. The virus has killed around 13,000 people since surfacing in China at the end of last year.

As the virus triggers more restrictions and claims more victims around the globe, pressure at least to delay the event is increasing.

Serbia and Croatia joined the Olympic committees and sports bodies opposing the IOC’s plans to proceed, while German former world champion fencer Max Hartung, who has already qualified for Tokyo, said he would boycott the Games.

“Japan has invested a lot of resources into the Olympics and they are adamant that the Games should go ahead, but that defies common sense and we cannot support it because human lives come first,” Serbian Olympic Committee president Vanja Udovicic said.

His Croatian counterpart, Zlatko Matesa, said it was “impossible” to proceed with the Olympics under the current circumstances.

“Sports is not an issue now as competing has become impossible,” Matesa said. “I believe it is impossible for the Games to go ahead as scheduled and in my opinion they should and will be postponed for a few months. It won’t be a dramatic delay.”

Germany’s Hartung, a four-times European champion who also heads the German Olympic Committee’s athletes’ commission, said he could no longer justify competing in Tokyo and said everyone had to play their part in stopping the spread of the virus.

“I have taken my decision. This summer I will not be taking part at the Olympic Games at the scheduled dates,” he told German broadcaster ZDF.

“I cannot train at the moment but more importantly I thought how can I as a sportsman contribute to end this crisis and I can do that by showing strength to do the right thing instead of training. So those dates in my view are not possible.”

Many athletes who are unable to train or compete have also demanded a postponement as qualifying events have been scrapped and training facilities shut down.