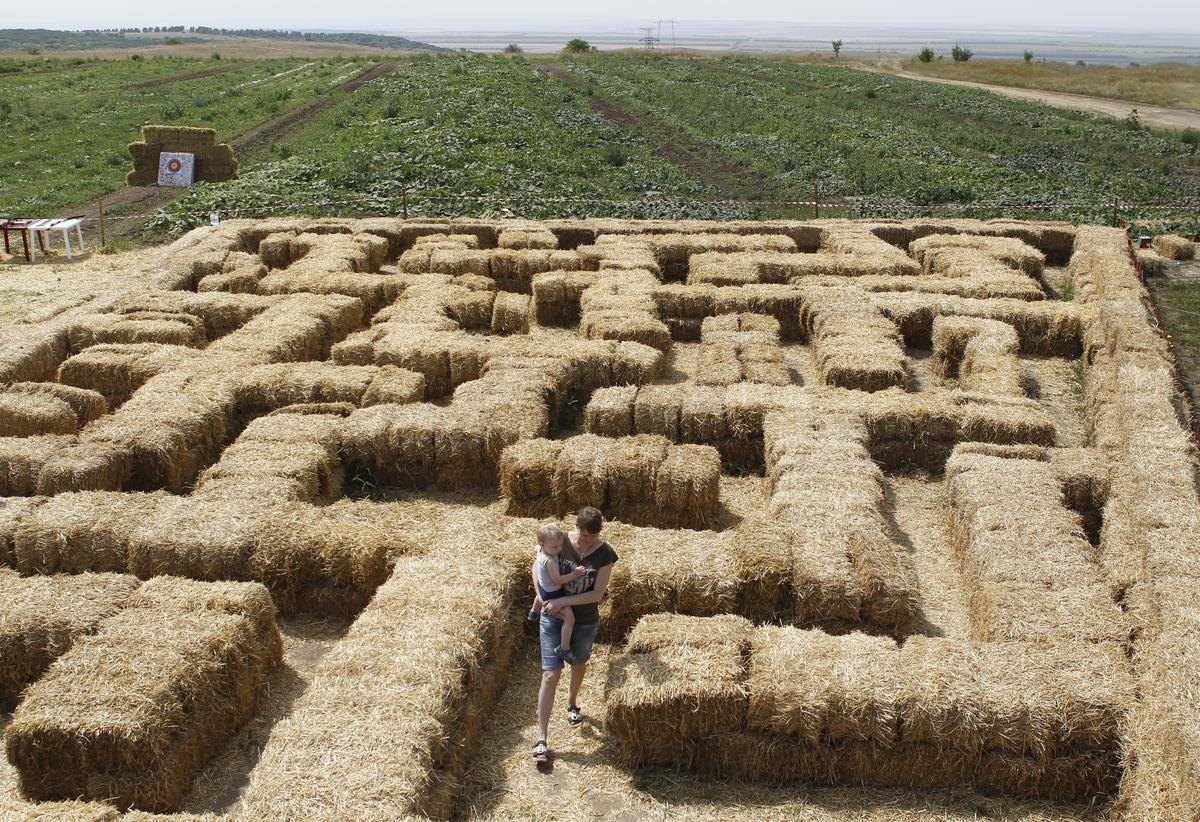 LONDON (Reuters) – Wide variations in the way oil companies report their efforts to reduce carbon emissions make it difficult to assess the risk of holding their shares as the world shifts away from fossil fuels, senior fund managers say.

FILE PHOTO: Visitors walk through a maze at an amusement park at the “Ponomaryovo” farming enterprise in the settlement of Krasnoye in Stavropol region, Russia July 19, 2017. REUTERS/Eduard Korniyenko/File Photo

Investors have poured money into so-called sustainable funds, which take into account companies’ environmental, social, legal and other standards, and funds are under pressure from their customers and authorities to make those standards robust.

Fund managers are also applying environmental, social and governance (ESG) criteria more widely in traditional investments to help them judge how companies will fare over the long term.

There is a growing realization that some companies’ profits will shrink faster than others as governments prioritize low-carbon energy to meet the U.N.-backed Paris agreement’s goal of cutting emissions to “net zero” by the end of the century.

But oil and gas companies are among the biggest dividend payers, and major funds are reluctant to divest from them, arguing that by staying in they are in a better position to pressure companies to improve.

“Disclosure is not necessarily so we can seek to change the numbers, but so we can start understanding and pricing the risks,” Stansbury said.

“A THOUSAND WAYS TO PARIS”

There are many voluntary initiatives and frameworks to unify carbon accounting and target setting; some overlap but none have been universally adopted. Further projects exist for other greenhouse gases such as methane.

The Greenhouse Gas Protocol is one such set of standards, established by non-governmental organizations and industrial groups in the 1990s.

Companies can report their progress in line with these standards through non-profit CDP, formerly known as the Carbon Disclosure Project, which then ranks them. Norway’s Equinor comes first in its list of 24 oil major companies, but not all of them report in every year.

There is also the Task Force on Climate related Financial Disclosures (TCFD), created by the G20’s Financial Stability Board, as well as industry bodies, in-house models at oil firms and banks and third-party verifiers and consultants.

“There are a thousand ways to Paris,” London-based BP’s Chief Executive Bob Dudley said at a Chatham House event earlier this year referring to the 2015 accord aiming to keep global warming well below 2 degrees.

BP Finance Chief Brian Gilvary told Reuters BP would welcome more consistency within the sector to show what oil companies are doing about emissions and that an industry body, the Oil and Gas Climate Initiative (OGCI), was discussing carbon accounting.

A plethora of third party ESG verifier companies were emerging with varying ways of measuring ESG metrics, he said, adding that some such firms would say to an oil company, “We believe your score is this, and, by the way, if you spend $50,000 we’ll show you how you can improve that score.”

UBS, with $831 billion of invested assets, has $2 billion in its Climate Aware passive equity strategy, which is in part based on a company’s emissions reporting.

In that strategy “we tilt towards companies that are better performing on a range of climate metrics and away from companies that do not perform so well in this respect,” Francis Condon, executive director for sustainable investing, said.

“We don’t want to be accused of greenwashing or falling for it,” he said, adding that UBS regularly encouraged companies to prepare for the climate transition.

Using a broad measure, global sustainable investment reached $30.1 trillion across the world’s five major markets at the end of 2018, according to the Global Sustainable Investment Review. This equates to between a quarter and half of all assets under management, due to varying estimates of that figure.

Condon said most investors were still more focused on returns than wider sustainability criteria but were becoming concerned that companies may expose them to possible future climate-related financial losses.

“There is a very limited appetite for giving up performance for higher ESG. The question is more: is management taking on risks it can’t manage?”

To try to answer that question, the world’s biggest financial service providers are investing in companies which provide ESG-related data.

Independent climate risk advisors Engaged Tracking say they attracted two-thirds of their clients in the past year. All six companies provide data, assessments and consulting on the climate exposure of companies or bonds.

A central issue, discussed at European oil majors’ shareholder meetings this year, is how they deal with the emissions caused by the products they sell, such as gasoline or kerosene, which are known as Scope 3 emissions.

Such emissions are typically around six times larger than the combined emissions from oil companies’ direct operations and power supply, also known as Scope 1 and 2 emissions, according to Reuters calculations.

Even if a company publishes Scope 3 data, there are 15 different categories based on the Greenhouse Gas Protocol. These include use of sold products such as fuel alongside secondary factors such as business travel or employee commuting.

Constantine Pretenteris at Engaged Tracking said some companies achieved a high score for comprehensiveness by disclosing data for most of the Scope 3 categories, but left out the key ones, such as emissions from use of their fuel.

“We would love to see a general standard which makes comparisons easy,” Sven Reinke of Moody’s said. “It doesn’t fully exist these days.”

The majority of climate-related targets are based on intensity measures, which means absolute emissions can rise with growing production, even if the headline intensity metric falls.

Total recorded Scope 3 emissions from the world’s top public oil companies are still rising, largely due to rising oil and gas output, according to Reuters calculations based on data carried on Refinitiv’s Eikon platform and company websites.

Individual figures vary according to the metrics a company chooses to include. Conoco said its Scope 3 emissions had fallen 5%, while the other companies’ individual recorded Scope 3 emissions either rose or stayed roughly the same.

Asked for comment, BP and Chevron pointed to absolute targets related to their own operations. Total pointed to progress it had made towards lowering emissions intensity per unit produced. Shell and Repsol referred to their short-term intensity-based targets and Equinor said it could not take responsibility for emissions it does not control.

Top oil companies have boosted investment in renewable energy and low-carbon technology in recent years, particularly in Europe, but much bigger sums are still going into developing oil and gas.

“We cannot change the patterns of consumption around the world – we cannot make people fly less. We can reduce the carbon intensity of the products we sell,” Shell Chief Executive Ben van Beurden said in June.

Mark Lewis from BNP Paribas and a member of TCFD, said overall cuts were what would count in the end. Repsol is currently the only major oil company to have set absolute reduction targets for all its output.

“The Paris Agreement is all about a carbon budget and that’s an absolute number. It’s not an intensity number,” Lewis said. “The atmosphere works in terms of absolutes not intensity.”

In the meantime, some investors are avoiding oil companies which others say should be supported for going further than many of their peers.

London-based investment management firm Sarasin & Partners said in June it was selling down its stake in Shell because its spending plans were out of synch with international climate targets.

Asked for comment, Shell pointed to comments from representatives of the pension funds of the Church of England and Britain’s government Environment agency, which praised the company’s transparency and said others should follow its lead.

Prepare to study in Canada
Study permit: Who can apply
Roe vs Wade: How Disenfranchised Americans Can Immigrate to Canada
How Do I Get In The Canada Express Entry Pool?
Canada Has 3 Of The Most Livable Cities In The World
Canada Express Entry 6-Month Review: Slow First Half of 2022, With All Eyes On Return Of All-Program Draws
Canada Immigration Drives Fastest First Quarter Population Growth For 30 Years