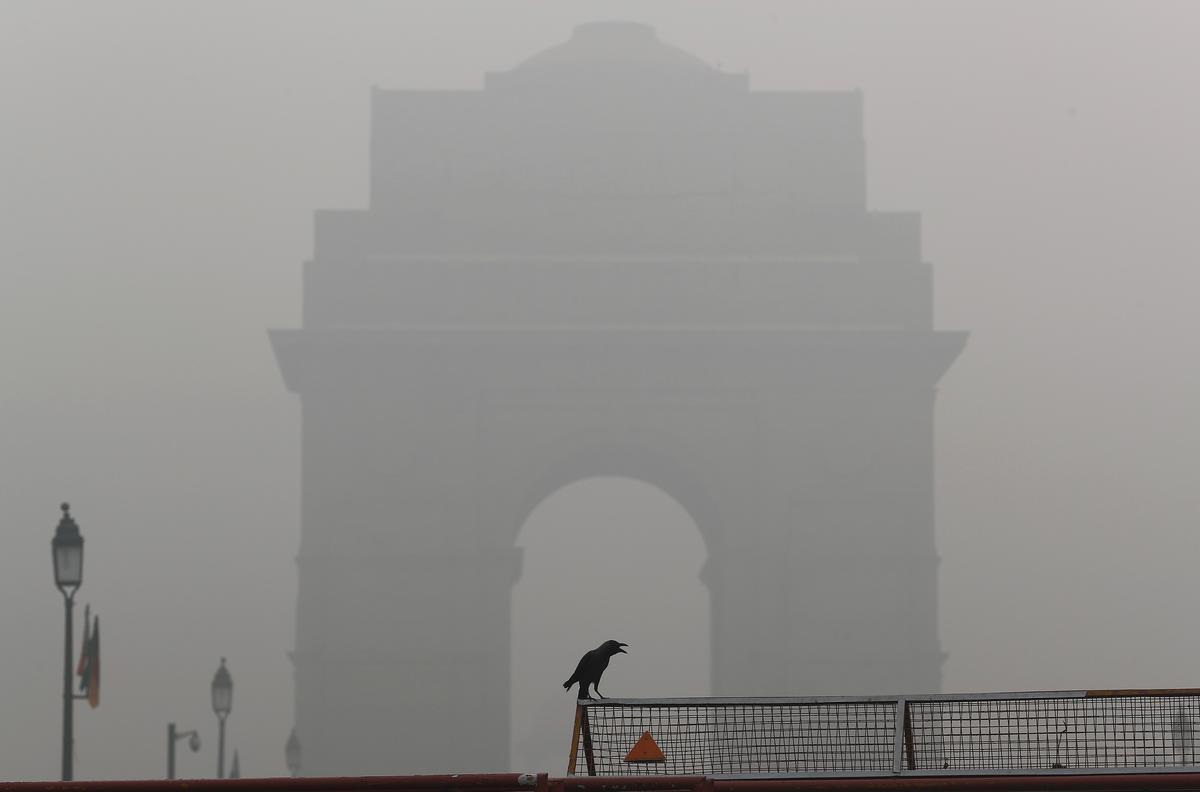 NEW DELHI (Reuters) – Air pollution in New Delhi and surrounding towns reached the worst levels so far this year on Sunday, with authorities in the world’s most polluted capital city having already declared a public health emergency and ordered the closure of schools.

A crow sits on a barricade in front of India Gate amidst smog in New Delhi, November 3, 2019. REUTERS/Adnan Abidi

The air quality index, measuring levels of PM 2.5, tiny particulate matter in the air, deteriorated to above 900, way over the 500-level that qualifies as “severe-plus”.

Aside from the harm it was doing to the lungs of some 40 million people living in the capital region, the smog was so bad more than 30 flights were diverted from Delhi airport due to poor visibility.

Roads looked deserted as large numbers of people stayed home, rather than expose themselves to the noxious atmosphere outside.

The government environment monitoring agency SAFAR warned that no relief was expected for the next one to two days, as humidity resulting from unexpected light rains overnight had exacerbated pollution, already driven by higher the seasonal crop stubble burning by farmers in the surrounding states.

“Wind speed is picking up and it could take 24 to 48 hours before the pollution level reduces to a level of around 500,” Mahesh Palawat, vice president of Skymet, a private weather forecasting agency, said.

Anything above 400 on the AQI poses a risk for people with respiratory illness and can also affect even those with healthy lungs.

Doctors were reporting a spike in patients with respiratory related issues, according to Sachin Taparia, head of Local Circles, a Delhi-based private consultancy that conducts surveys on government policies and programs.

“Delhi has turned into a gas chamber as the pollution levels hit the ‘severe+’ category,” Taparia said.

Authorities in Delhi on Friday declared a public health emergency and closed schools and all construction activity.

From Monday, the city government will also restrict the use of private vehicles on the capital’s roads under an “odd-even” scheme based on license plates.

“The temporary restrictions on private vehicles will have a negligible impact as we face the most hazardous situation,” said Skymet’s Palawat.

Delhi’s Kejriwal, and the chief ministers from the neighboring states of Punjab and Haryana, urged the federal government to do more to combat the pollution.

On Monday, according to a lawyer, the Supreme Court is likely to hear a petition on Monday from the environment agency, looking for ways to make state governments to take tougher action against farmers to curb the stubble-burning. Politicians have been reluctant to upset their farming constituencies.

According to SAFAR, satellite pictures had captured more than 3,000 incidents of stubble burning last week in neighboring states, contributing to 44% of Delhi’s pollution.

Prepare to study in Canada
Study permit: Who can apply
Canada Invites 893 Candidates In First PNP-Only Express Entry Draw Of 2023
Ontario Targets 53 Tech and Health Occupations In New PNP Draw
US Plans to Lift Covid Emergency Declarations May 2023
Aircraft Assemblers Can Now Immigrate To Canada Through Express Entry
How You Could Immigrate To Canada Through The Start-Up Visa In 2023