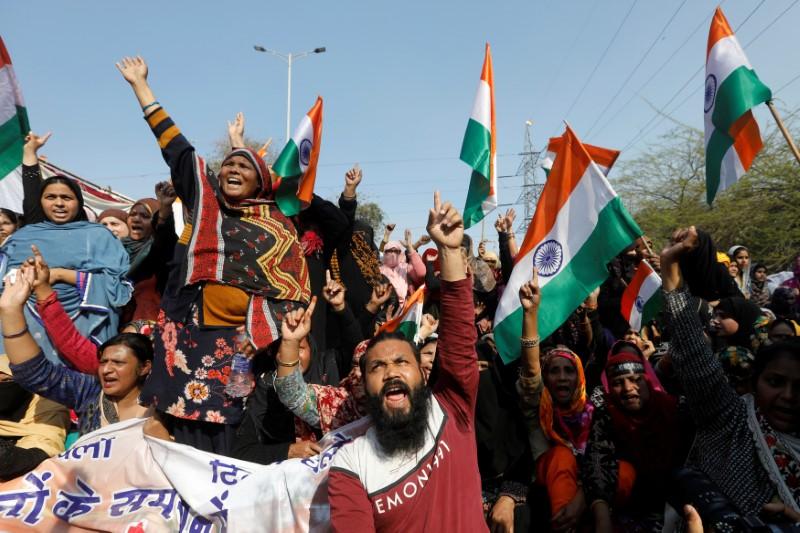 NEW DELHI (Reuters) – Police in India’s capital broke up the longest-running protest against Prime Minister Narendra Modi’s citizenship law on Tuesday, citing a ban on public gatherings because of the coronavirus outbreak.

Dozens of people, many of them women, have been staging a sit-in protest since early December on a street in the Shaheen Bagh neighborhood, which has become a focal point for opposition to the law seen as discriminating against Muslims.

“It is a dangerous environment, with this coronavirus, we urged them to leave,” he told reporters.

Some demonstrators resisted the police and at least nine people had been detained, six of them women, Srivastava said, adding there was no violence.

Television showed police taking down tents and billboards at the protest site with bulldozers.

Delhi is under a lockdown until the end of the month to halt the spread of the virus and public gatherings of more than five people have been banned.

The Citizenship Amendment Act, which eases the path for non-Muslims from neighboring Muslim-majority countries to gain citizenship, triggered weeks of sometimes violent protests against Modi’s government after it was passed in December.

At least 78 people have been killed in demonstrations triggered by the law across the country, a large number of them in another part of Delhi in clashes between Hindus and Muslims.

Critics say the law discriminates against Muslims and it has deepened concern that Modi’s administration is undermining India’s secular traditions.

Even before the coronavirus epidemic, the protest at Shaheen Bagh had become a thorn in the government’s side, and there had been calls by hardline Hindu groups linked to Modi’s alliance and residents in the area to clear it out.

India has reported 471 cases of the coronavirus but health experts have warned that a big jump is imminent, which would likely overwhelm the underfunded and crumbling public health infrastructure.