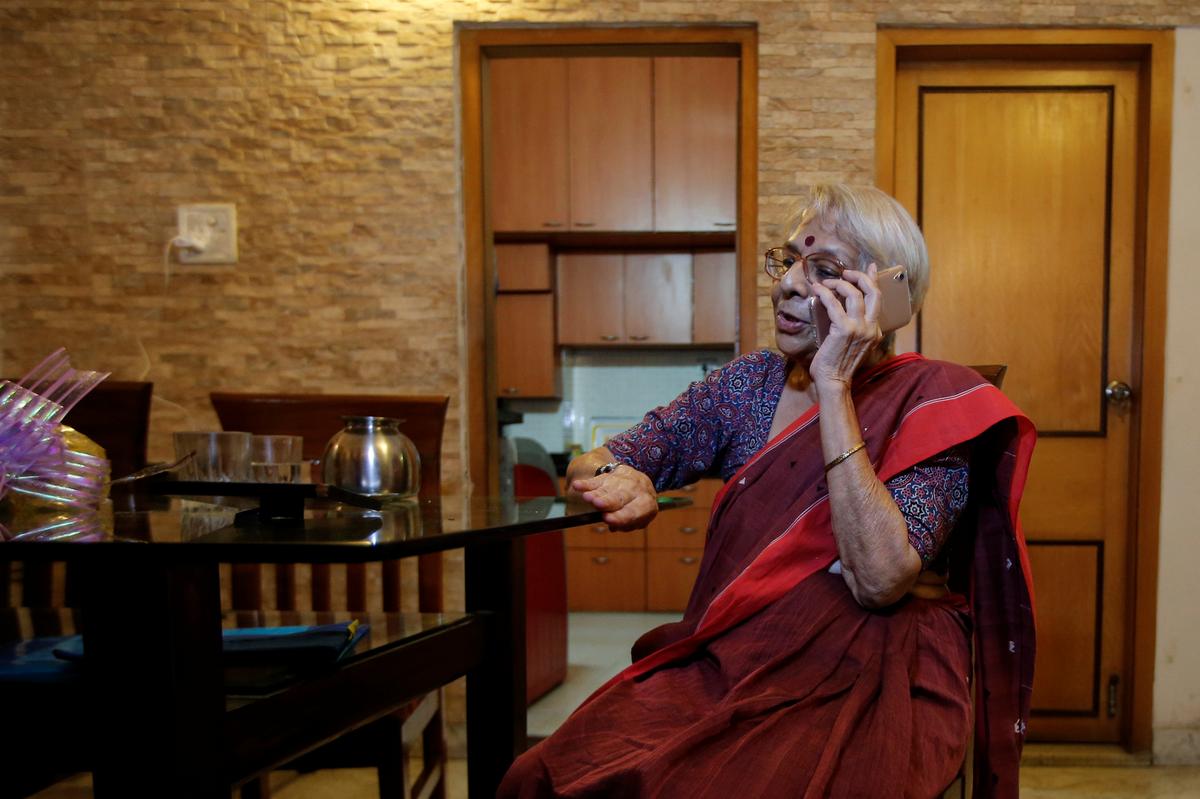 NEW DELHI (Reuters) – Indian politicians and academics cheered the Nobel economics prize awarded on Monday to Indian-born American Abhijit Banerjee, whose proud mother told visitors crowding into her apartment that he came from “a family of economists”.

Nirmala Banerjee, mother of Abhijit Banerjee, one of the winners of 2019 Nobel Economics Prize, speaks on the phone at her house in Kolkata, India, October 14, 2019. REUTERS/Rupak De Chowdhuri

Nirmala Banerjee showed journalists a copy of her son’s book “Poor Economics” as bouquets arrived at her home in the city of Kolkata and friends and family called to congratulate her.

“We are a family of economists, his father, me … everyone is an economist,” she said. “But we worked in different fields. We had discussions and debates on many issues.”

Banerjee was recognised for his work on fighting poverty and some said the award was a repudiation of policies pursued by Prime Minister Narendra Modi.

Banerjee, who won the prize along with Esther Duflo and Michael Kremer, has been critical of the Modi government, saying some of its economic decisions, such as banning high-value currency notes, were “weird”.

In March, he joined 107 economists and social scientists in seeking an end to political interference in India’s statistics institutions, saying the integrity of economic data must be protected after allegations that growth had been inflated and figures showing unemployment at a 45-year high suppressed.

Nonetheless, Modi offered praise. “Congratulations to Abhijit Banerjee … He has made notable contributions in the field of poverty alleviation,” he said in a Tweet.

Others were more ebullient.

The leader of India’s main opposition Congress party said Banerjee, who is based in the United States, had helped the party draft the minimum income scheme to fight poverty on which it fought elections earlier this year.

But the Congress suffered a resounding defeat at the hands of Modi’s nationalist Bharatiya Janata Party which ran a campaign focused on national security.

Banerjee had helped conceptualise a programme that had the power to destroy poverty and boost the economy, Gandhi said.

“Instead we now have Modinomics, that’s destroying the economy and boosting poverty.”

Banerjee told India’s online news outlet The Wire in 2017 that the Modi government didn’t seem to have any new economic plan, despite its promise to transform India and free it from the yoke of government.

“Having said that, there are a couple of weird things that the government did, one of those things was demonetization. I don’t think there was any serious economics in it, and there was no particular reason it would do much good,” he said.

The shock ban on currency notes in 2016, which Modi hailed as part of a broader fight against corruption, is widely seen to have contributed to the economic slowdown along with a hastily implemented national goods and service tax.