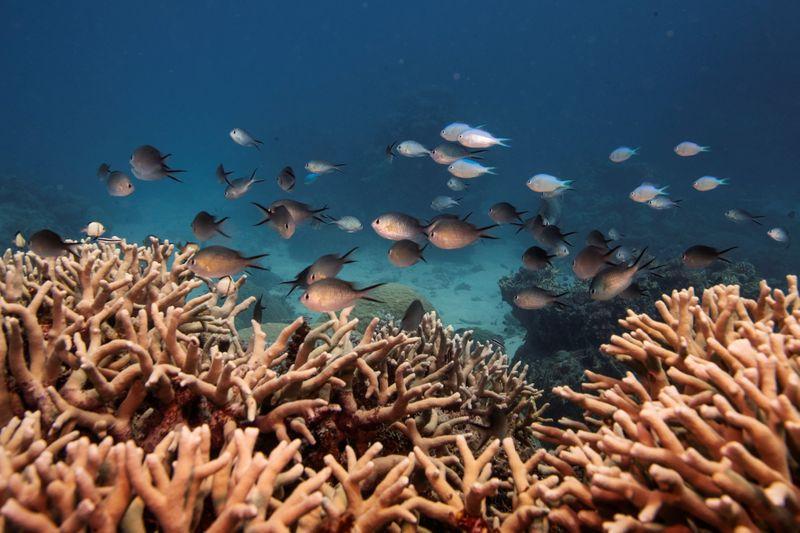 PALISADES, N.Y. (Reuters) – Some 20 miles north of New York City, a team of scientists is searching for clues about how the environment is changing by studying organisms not usually found in the woods around here: corals.

A school of fish swim above a staghorn coral colony as it grows on the Great Barrier Reef off the coast of Cairns, Australia October 25, 2019. REUTERS/Lucas Jackson

In the labs of the Lamont-Doherty Earth Observatory, a research unit of Columbia University overlooking the Hudson River, the scientists led by Professor Braddock Linsley pore over feet-long coral cores they extracted from far-away reefs.

For Linsley and his colleagues, corals are a precious repository of clues tmsnrt.rs/360ebeX about the past that may help predict future climate trends. They can also reveal how much and how fast environmental conditions have changed during a certain period of time.

Cores are the hard, stony part of a coral underneath the top of the colony – its skeleton. Much like trees, corals produce growth rings that record climatic conditions like seawater temperatures and rainfall as they grow.

In a lab room packed with boxes of coral samples, Linsley and a small team of colleagues cut the cores into slabs and then X-ray the slabs to reveal the annual growth bands.

Using dentist drills, they pulverize small pieces and run geochemical analyses of the coral dust to reconstruct changes in the temperature, salinity and acidity of the water around the coral on a monthly basis going back hundreds of years.

“It is years of lab work and a lot of frustration but once you get to that point, the final product is just so exciting because you’ve got this long dataset,” Linsley said.

Coral reefs develop over thousands of years and are vital to the survival and prosperity of countless marine species. They also curtail flood damage from storms and support human activities like fisheries.

Some of Linsley’s recent research on corals from the South Pacific island of Tonga suggests that increased seawater acidification caused by excess CO2 could lead to a decline in coral growth rates, endangering the wellbeing of entire reefs.

Linsley, a tall and soft-spoken 60-year-old, grew up on the Connecticut coast, making dams in the sand and observing erosion on the beaches near the town of Guilford. He loved water and began his career studying ocean sediments and fossils.

His work on corals began after a chance encounter with a colleague who was visiting his girlfriend at the University of New Mexico – where Linsley was studying to get his PhD in the late 1980s – led to a collaboration.

“I was fascinated by the fact that the corals had these annual bands in them and you could potentially extract annual resolve records back several hundred years,” he said at his office in the leafy campus, papers and books scattered on his desk and photos of diving expeditions on the wall.

Corals also brought him closer to the water and he had to learn how to dive, a perk of the job for Linsley.

By studying the environmental records derived from corals, the scientist is hoping to be able to shine a light on issues like the rate of surface ocean warming, ocean acidification and the impact on coral reef ecosystems worldwide.

But one thing is already evident, he said. Environmental changes are happening much more rapidly than in the last several thousand years and they are “clearly linked” to human activity.