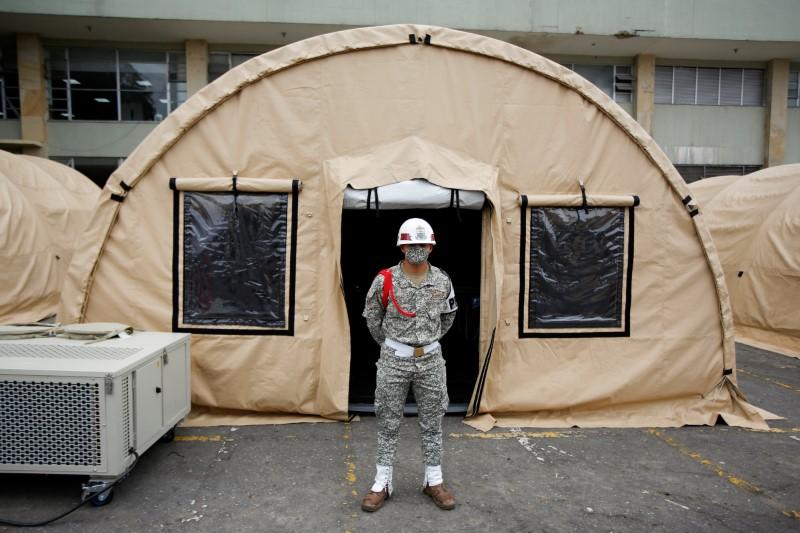 BOGOTA (Reuters) – Colombia’s central military hospital, which for decades was inundated with victims of landmines and other casualties of the country’s internal conflict, is being outfitted to battle a new enemy: coronavirus.

A Colombian soldier stands outside one of the tents being built in a parking lot of the Military Hospital for patients with coronavirus disease (COVID-19), in Bogota, Colombia March 23, 2020. REUTERS/Leonardo Munoz

The hospital’s staff parking lot is now home to eight generator-supplied tents, each with 11 beds, meant to house coronavirus patients without respiratory complications in an effort to avoid crowding the existing intensive care unit.

The Andean country will enter a nationwide 19-day quarantine this week aimed at preventing further spread of the virus, which has killed more than 15,300 people worldwide. Colombia has 277 confirmed infections and three deaths attributable to the virus.

“We’ve been preparing for several months, since we started to see what was happening in other countries in relation to COVID-19,” hospital director General Clara Esperanza Galvis told Reuters.

The hospital, set close to the steep hills that descend to Bogota’s eastern fringes, is used to very different kinds of patients.

During the height of the country’s armed conflict between the government, leftist rebels, right-wing paramilitary groups and drug cartels many patients were security force personnel injured by bombs, bullets and landmines. The conflict has killed 260,000 people.

The hospital is also known for its work on mental health and tropical diseases.

Without the tents the hospital has 450 beds and an intensive care unit with capacity for 50 patients.

The health ministry predicts that up to 4 million people, about 8% of the population, could contract coronavirus in Colombia.

The country’s already overstretched health system has 84,500 hospital beds, well below international standards that urge between 2.5 and 4 beds per 1,000 inhabitants.

Intensive care units in the country have just 5,600 beds and insufficient respirators.

Asked if contingency plans will be enough to respond to the virus, Galvis said she “would like to hope so.”

A Colombian soldier stands outside one of the tents being built in a parking lot of the Military Hospital for patients with coronavirus disease (COVID-19), in Bogota, Colombia March 23, 2020. REUTERS/Leonardo Munoz

“Given the experience of other countries we know it will be difficult, but we are preparing,” she said.

“If we don’t comply with these isolation, these control measures that they are giving us, it could take us to a collapse at health centers.”