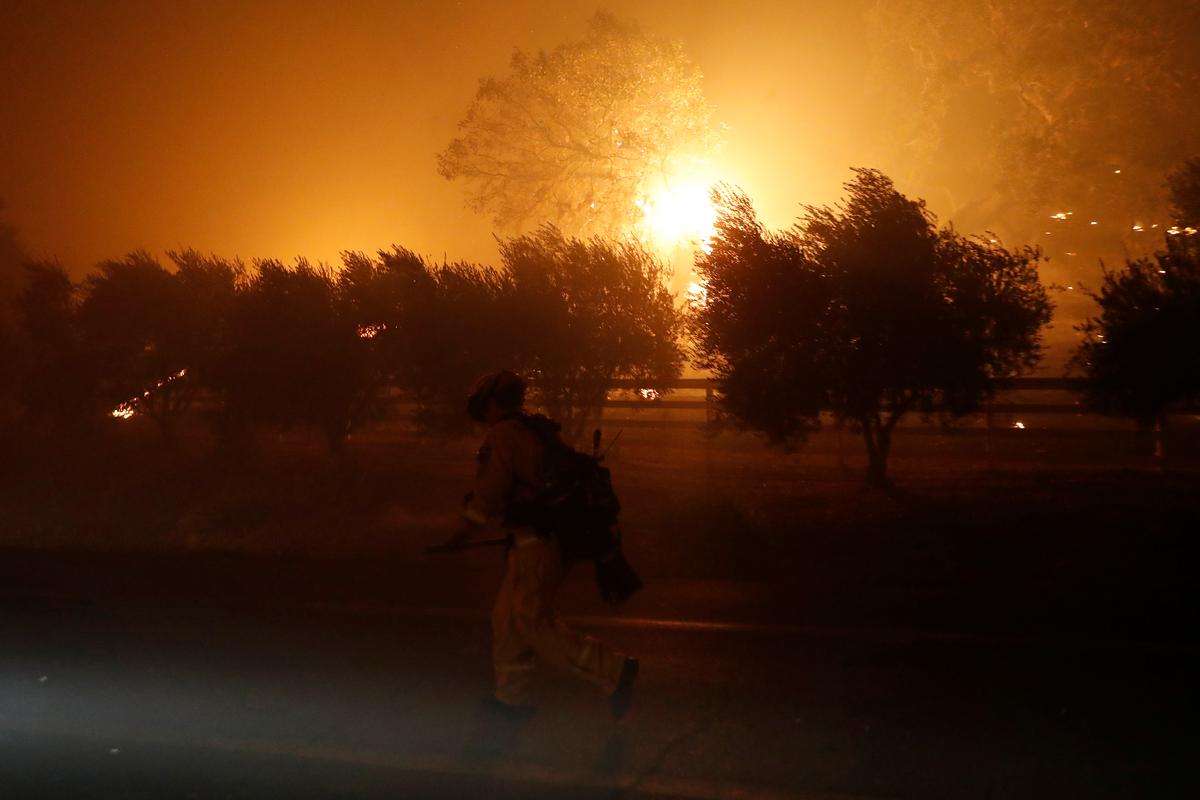 GEYSERVILLE, Calif. (Reuters) – A wind-driven wildfire roared across a swath of northern California wine country on Thursday, prompting the evacuation of some 2,000 Sonoma County residents, including the entire town of Geyserville, where about a dozen homes were destroyed.

The Kincade fire was the most severe of several blazes raging throughout California as utility companies cut off electricity to nearly 200,000 homes and businesses across the state in precautionary outages to reduce wildfire risks from high winds.

The Sonoma County blaze erupted late Wednesday night and by Thursday morning had scorched some 10,000 acres (4,047 hectares), the California Department of Forestry and Fire Protection (Cal Fire) reported, as firefighters struggled to contain the spreading flames.

The Sonoma County Sheriff’s Office issued an evacuation order for Geyserville, home to nearly 900 people. Founded in the mid-19th century, the town was named for nearby hot springs and other geothermal attractions.

A Reuters photographer observed about a dozen homes in flames in the town on Thursday.

By midday on Thursday, mandatory evacuation notices had been expanded to cover roughly 2,000 people overall, the sheriff’s office said. An evacuation warning was in effect for the northern end of the larger wine country town of Healdsburg, a short distance to the south, urging residents to be ready to flee at a moment’s notice.

A firefighter walks by a burning tree along Red Winery Road during the Kincade fire in Geyserville, California, U.S. October 24, 2019. REUTERS/Stephen Lam

Governor Gavin Newsom said the state had secured a grant from the Federal Emergency Management Agency to help ensure adequate resources to battle the Kincade fire and to help local and state authorities recover eligible costs.

Large parts of California were under red-flag alerts this week due to forecasts of hot, dry winds blowing into populated areas from deserts to the east.

More than half a million homes and workplaces in the state could lose power this week as utilities, including Pacific Gas & Electric Company (PCG.N) and Southern California Edison (SCE_pe.A), turned off electricity in areas where the wildfire threat was deemed most dire.

Wind-damaged utility equipment was found to have triggered a number of major California wildfires in recent years, including a spate of blazes that swept Sonoma and adjacent counties north of San Francisco in 2017, as well as last year’s catastrophic Camp Fire, which killed 85 people in and around the town of Paradise.

Billions of dollars in civil liabilities incurred by PG&E from those disasters prompted the utility to file for bankruptcy earlier this year. The company last year also instituted a strategy of large-scale preventive power shutdowns when high winds were in the forecast.

Earlier this month, more than 730,000 PG&E customers lost electricity in northern California in a planned power shutdown of unprecedented scale, widely criticized as having been poorly managed and communicated to the public.

National Weather Service meteorologist Marc Chenard said severe winds were expected to intensify later in the day and into Friday.

“It looks like at its worst, Southern California will see wind gusts of 55 miles per hour (89 kph). Down in some of the coastal areas, the winds could reach 75 miles per hour (121 kph) later today,” he said.

Chenard added that northern California could experience wind gusts of up to 45 mph (72 kph).

“This is not going to abate until at least this weekend,” he said.