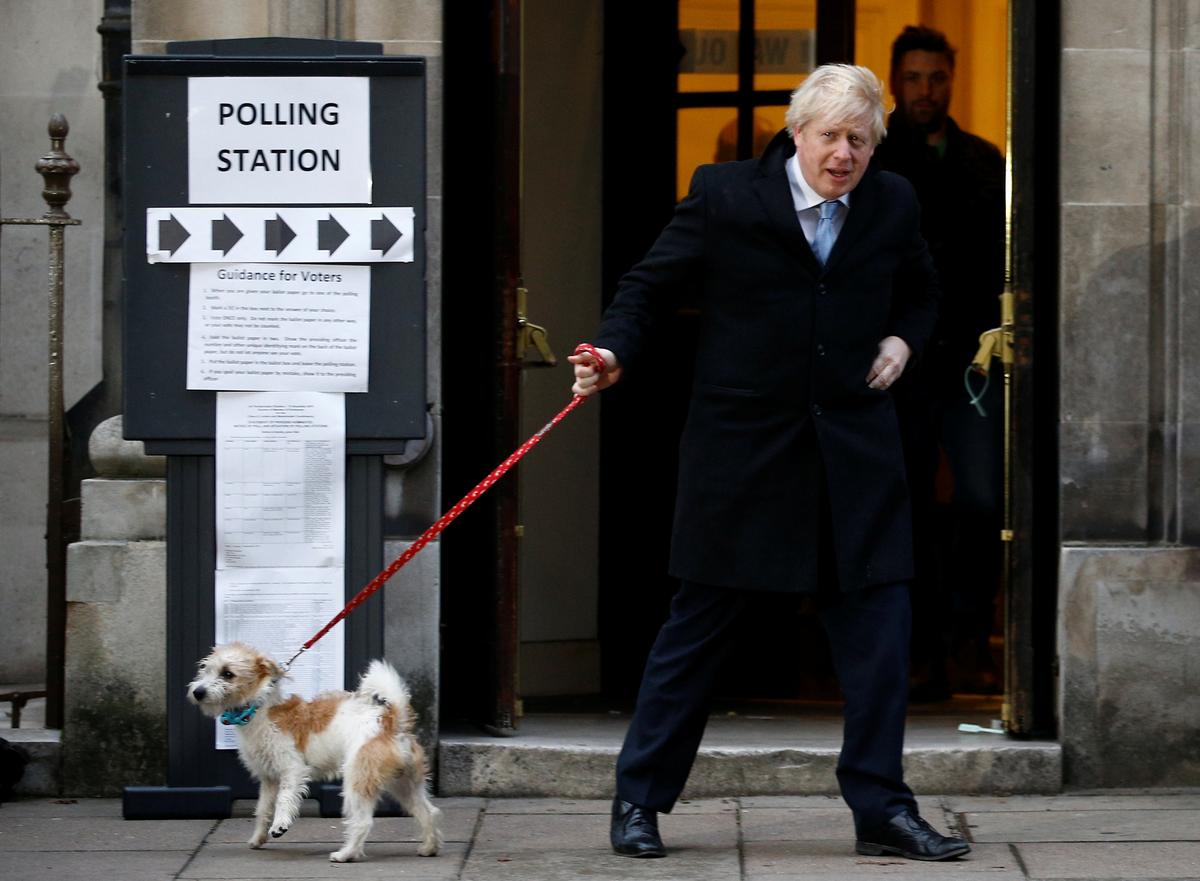 (Reuters) – It was a straight forward message: “Get Brexit done.”

The mantra of British Prime Minister Boris Johnson and his Conservative Party during the national election campaign was aimed at harnessing voter frustration at a parliamentary logjam over Britain’s exit from the European Union.

Beyond the traditional strategy of swaying voters in swing districts held by the main opposition Labour Party, Johnson wanted to strike directly at Labour’s heartlands in the hopes of winning support from people who had never voted Conservative but for whom Brexit had come to trump even traditional party allegiances.

By Friday morning in Britain, Johnson’s Conservative Party had secured a majority of the 650 seats in the House of Commons. The result handed Johnson his first national election victory but also delivered a dramatic blow to his main competitor, opposition leader Jeremy Corbyn, whose Labour Party suffered heavy losses.

For 55-year old Johnson, who only entered Downing Street this summer after his Conservative predecessor resigned, calling an election had been a high-stakes gamble.

But he also considered it a necessity to convert his party’s minority in the House of Commons into a majority and move his government’s agenda forward. Notably, that includes Britain – the world’s fifth largest economy - exiting the European Union by the end of January, which would mark the country’s most significant trade and foreign policy move since World War Two.

The five-week campaign also saw Johnson facing questions about his personal trustworthiness after his repeated failed promises during the year to deliver Brexit by the end of October “do or die.”

He faced allegations of failing to disclose close personal ties with a U.S. businesswoman who had received thousands of pounds in public business funding while he had been mayor. Jennifer Arcuri publicly said during the campaign she had had “a very special relationship” with Johnson, who has denied any impropriety. A government audit report ruled that a ministerial department’s decision to award a 100,000 pound ($128,000) grant to a company run by Arcuri was appropriate.

The plan early in the campaign was to target around 40 traditionally Labour supporting seats in northern and central England, a party source close to the campaign said. Johnson launched the Conservative campaign battle bus in Middleton in northwest England, in a district with a slim Labour majority but which saw 62% of voters back Brexit in 2016.

“The strategy is to woo Brexit Party supporters of all colors and to specifically court Labour leave voters especially in the North and Midlands,” said the source, speaking on Oct. 29, the day the House of Commons approved an early election.

“The themes are people versus parliament, let’s get Brexit done and move on, and a very merry Brexit to everyone.”

As the results of Thursday’s election rolled in, it became clear that the Conservatives had succeeded in scooping up seats in districts that had voted Labour for generations, including places like Bishop Auckland and Sedgefield, the seat held by former Labour Prime Minister Tony Blair. However, Johnson’s party had lost seats in some more pro-EU constituencies, such as Putney in London.

His often-ruffled appearance, including a distinctive mop of blonde hair, marks a contrast to the discipline and ruthlessness he displayed to get to this point.

Johnson – full name is Alexander Boris de Pfeffel Johnson – took office in July after winning a Conservative Party leadership contest triggered by the resignation of former Prime Minister Theresa May. She had failed to win backing by parliament for a Brexit divorce agreement she had negotiated with the EU.

The new prime minister and his team concluded early on that the only way to change the arithmetic in the House of Commons was to force a new election. But he needed a united front – no easy feat for a party where the issue of Europe has caused infighting and played a role in the downfall of the previous four Conservative prime ministers.

During his first weeks in office he oversaw one of the biggest purges of cabinet ministers in modern British history and expelled from his party 21 Conservative lawmakers who had voted against the prime minister on Brexit, including the grandson of Winston Churchill.

“We weren’t bluffing, and they were wilfully ignorant if they thought differently,” said a senior prime ministerial aide at the time, referring to a message from Johnson to lawmakers that he expected loyalty.

The election campaign officially started in early November and Johnson sought to convince voters that his party was the only one which could break the impasse among politicians in Westminster to enable the country to move forward.

Britain’s Prime Minister Boris Johnson leaves a polling station at the Methodist Central Hall, with his dog Dilyn, after voting in the general election in London, Britain, December 12, 2019. REUTERS/Henry Nicholls

The campaign focused heavily on core Brexit-related messages and was relatively light on policy detail, several members of his campaign team said. “The whole point of this campaign was to keep it tight and focused,” said one of his team. “It’s all about the messaging.”

Team Johnson received a boost when the Brexit Party led by veteran eurosceptic Nigel Farage early on in the campaign said his candidates would not fight for 317 Conservative-held seats to avoid splitting the Leave vote.

In an effort to unite his party, which was also divided over Europe, Labour’s leader Corbyn settled on a policy of negotiating a new deal to leave the EU followed by a second referendum – a stance that was unpopular with the party’s Brexit voters and even some in his own team.

He instead sought to focus the campaign agenda on a manifesto that included widespread nationalization and spending on public services such as the National Health Service, which the Labour Party established in 1948 and provides health care to all free at the point of delivery.

Johnson’s pitch included a pledge to lower immigration and that Brexit would free up money that Britain would otherwise pay to the EU that could be redirected to spending on public services, including the NHS, at home.

One pledge was to add 50,000 more nurses but, under scrutiny from the opposition and media, the prime minister acknowledged that 19,000 were already working in the NHS, adding that his policies would retain those workers that might otherwise leave.

During an Oct. 13 visit to the northern town of Doncaster, a female member of the public accused him of peddling fiction by promising a rosy future for Britain outside of the EU and being part of a government that had made cuts to public services.

“You’ve got the cheek to come here and tell us that austerity’s over and it’s all good now – we’re gonna leave the EU and everything’s going to be great,” the woman told the prime minister during a visit to Doncaster. “It’s just a fairy tale.”

His responded by saying his government was investing in the area.

Some voters said they planned to support him even if lack of trust was a factor.

“It’s tough to believe what they’re saying after the time that we’ve had recently,” said Tim Turner, 41, operations director at knitwear manufacturer John Smedley, during a visit by Johnson to a company mill in Derbyshire in central England on Dec. 5, questioning his assertion over the 50,000 nurses.

“I think he’s got the best chance, but whether I believe him or not is a different matter,” he said. Turner said he had voted before for other parties, including Labour, but would vote for Johnson in this election.

Johnson has repeatedly said that any breach of trust should be blamed on parliament, not him. “The issue before the country is after three and a half years politicians of all parties are held in low esteem because they have refused to get on and deliver on the mandate of the people,” he said on the campaign trail.

Conservative strategists considered Johnson’s personal popularity and proven ability to reach across party lines a key election asset. The charismatic politician helped lead the successful Brexit campaign in the 2016 referendum and is the only Conservative to have been London mayor.

But Johnson’s team were also aware the prime minister, known for his often-colorful turn of phrase and a tendency to go off script, was a potential liability. On the campaign trail, his team sought to minimize the risk of unflattering encounters with members of the public and with some television interviewers, according to a campaign source.

Many of his interactions with voters were in Conservative-held seats, while in traditional Labour districts the prime minister often visited businesses with sympathetic bosses or organized rallies in venues where attendees could be screened.

In the final days of the campaign, Johnson crisscrossed districts in the north and central England, regions where Labour has traditionally had strong support.

At a factory of British construction equipment maker JCB near Uttoxeter in central England on Tuesday, Johnson drove a digger emblazoned with “get Brexit done” through a makeshift wall emblazoned with the word “GRIDLOCK.”

Prepare to study in Canada
Study permit: Who can apply
Spike in Canadian Immigration Due to New US Abortion Restrictions
Roe vs Wade: How Disenfranchised Americans Can Immigrate to Canada
Temporary Workers, International Students More And More Important To Canada
Canada Express Entry 6-Month Review: Slow First Half of 2022, With All Eyes On Return Of All-Program Draws
Canada Has 3 Of The Most Livable Cities In The World