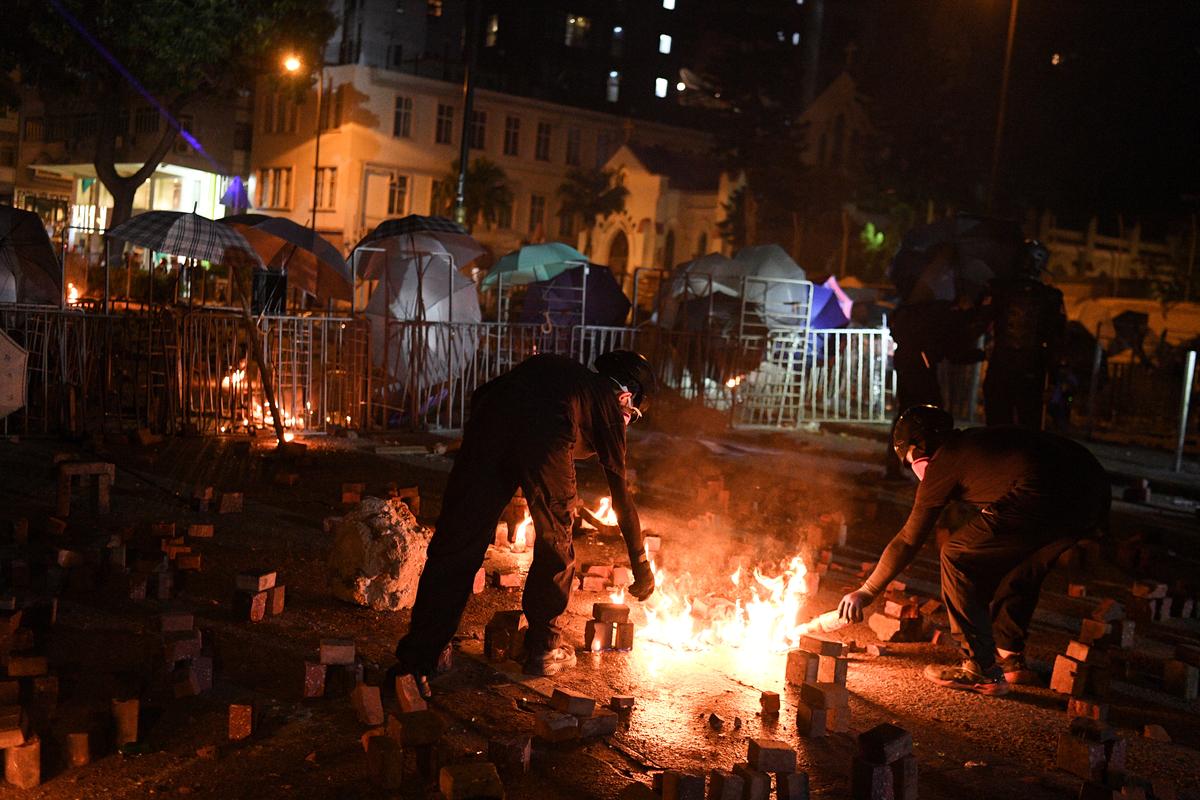 Huge fires had lit up the night sky at Hong Kong Polytechnic University in Kowloon district hours earlier as protesters hurled petrol bombs, some by catapult, and police fired volleys of tear gas to force them up onto the podium of the red-brick campus.

After a few quiet hours as protesters slept on lawns and in the university library, police fired fresh rounds of teargas shortly after 10am. Activists hurled petrol bombs in return, some igniting trees outside the campus.

Parts of the campus looked more like a fortress on Sunday morning, with barricades and black-clad protesters manning the ramparts with improvised weapons like bricks, crates of fire bombs, and bows and arrows at the ready.

The campus is the last of five universities to be occupied, with activists using it as a base to continue to block the city’s central cross-harbor road tunnel.

The presence of China’s People’s Liberation Army (PLA) soldiers on the streets, even to help clean up, could stoke further controversy over Hong Kong’s autonomous status at a time many fear Beijing is tightening its grip on the city.

Hong Kong did not request assistance from the PLA and the military initiated the operation as a “voluntary community activity”, a spokesman for the city’s government said.

Pro-democracy lawmakers condemned the PLA’s actions in a joint statement, warning that under the city’s Garrison Law the military must not interfere in local affairs unless it was asked by the government to help with disaster relief or public order, government-funded broadcaster RTHK reported.

The Asian financial hub has been rocked by months of demonstrations, with many people angry at perceived Communist Party meddling in the former British colony, which was guaranteed its freedoms when it returned to Chinese rule in 1997.

Beijing denies interfering and has blamed the unrest on foreign influences.

Clashes between protesters and police have become increasingly violent in the Chinese-ruled city, which is grappling with its biggest political crisis in decades.

The demonstrations pose the gravest popular challenge to Chinese President Xi Jinping since he came to power in 2012.

Xi has said he is confident the Hong Kong government can resolve the crisis. Until Saturday, Chinese troops in the city had remained inside their base during the protests.

Chinese state media repeatedly broadcast comments made on Thursday by President Xi, in which he denounced the unrest and said “stopping violence and controlling chaos while restoring order is currently Hong Kong’s most urgent task”.

Efforts on Saturday to clear blocked roads followed some of the worst violence seen this year after a police operation against protesters at the Chinese University of Hong Kong on Tuesday.

The authorities have since largely stayed away from at least five university campuses that had been barricaded by thousands of students and activists stockpiling makeshift weapons.

Many protesters appeared to have left the campuses by late Saturday but Hong Kong’s Cross-Harbour Tunnel was still blocked by protesters occupying Polytechnic University.

Some held up posters reading “Police we stand with you”, while others chanted “Support the police”. Pro-China protests have so far attracted much smaller numbers than those angry at Beijing.

By late afternoon on Saturday, PLA soldiers had left the streets outside Baptist University beside their barracks in Kowloon Tong.

Chinese troops have appeared on Hong Kong’s streets only once since the 1997 handover, to help clear up after a typhoon in 2018. It was not clear how many were involved in Saturday’s operations.

The PLA garrison in Hong Kong said that when residents began cleaning, some troops “helped clear the road in front of the garrison gate”.

In August, Beijing moved thousands of troops across the border into Hong Kong in what state news agency Xinhua described as a routine rotation.